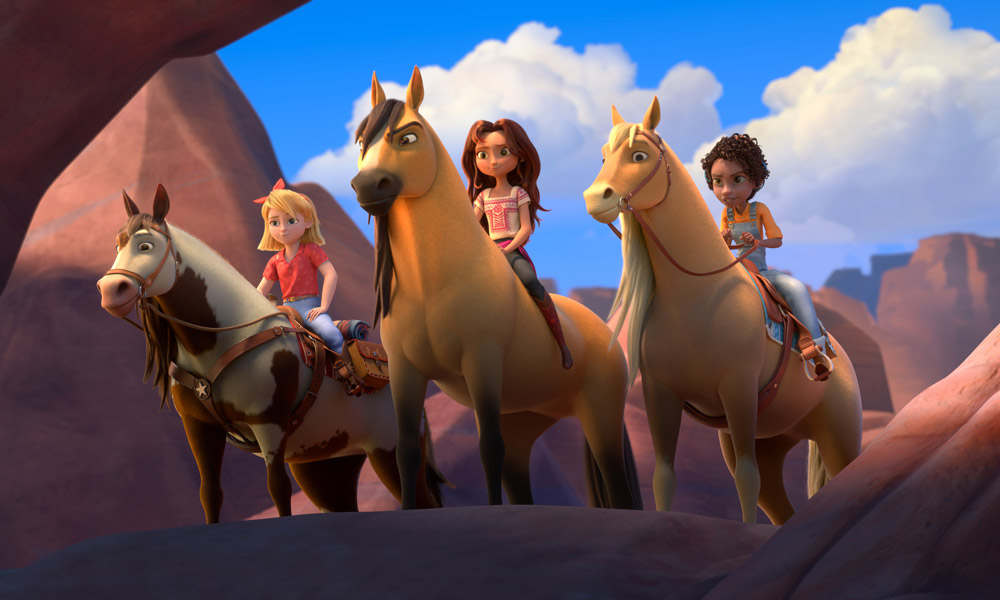 Throughout the years, noble equine companions have been a popular staple of coming of age stories in literature, films and TV shows. One of the most memorable horse heroes of the past two decades made his debut in DreamWorks Animation’s Oscar-nominated feature, Spirit: Stallion of the Cimarron back in 2002. A spin-off animated series Spirit Riding Free trotted out on Netflix in 2017.

This Friday, June 4, Spirit returns to the big screen in a new feature that follows a young girl’s journey into adulthood. In an important milestone for DreamWorks, Spirit Untamed has three top female creatives in key roles: Karen Foster (producer), Elaine Bogan (director) and Aury Wellington (writer). The film is co-directed by studio veteran Ennio Torresan.

The storyline still includes a wild horse, but this new outing features a young girl named Lucky Prescott who finds a connection to her late mother and her Mexican heritage through horseback riding in the new sleepy town she’s forced to move to. The voice cast includes Isabela Merced as Lucky, Jake Gyllenhaal as Lucky’s father, Julianne Moore as Aunt Cora and Walton Goggins as Hendricks.

The film’s lovingly crafted animation was created by London’s Jellyfish Pictures with their roster of artists working globally, including Vancouver and Northern California. Approximately 50 animators worked on the project in London, with the additional 70 animators joining them from around the globe.

Foster says the film’s artistic team was keen on preserving and expanding many of the most dynamic parts of the story established in the series. “Because we were reimagining the basic story for the big screen, we wanted to do honor to the big screen,” says Foster, who was a co-producer on How to Train Your Dragon and also produced several Kung Fu Panda shorts and Scared Shrekless. “We have changed the story somewhat. We wanted to give it a kind of a new re-imagining.”

The producer points out that a horse has always represented a certain kind of power for young girls. “It’s like the first romance,” says Foster. “There’s a wildness to it. There’s a freedom that as young women we don’t necessarily get all the time. I’m not a horseback rider, but I remember as a young girl I really wanted to go horseback riding because it looked so exciting. It’s adventure and freedom and power. It’s a thrilling adventure that’s wholesome, but it’s also boundary breaking.” 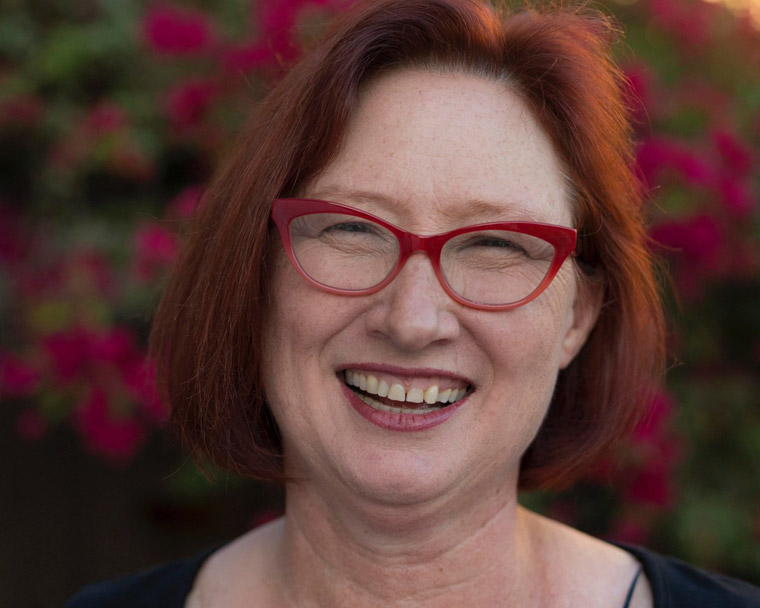 Bogan, whose directing credits include DreamWorks shows such as Tales of Arcadia and Dragons: Race to the Edge, says she loved the series and the previous film and was inspired to take the premise and the characters even further.

“We really wanted to just dive in even deeper and add to what was already a really great character and storyline from the series,” says Bogan. “The whole franchise itself has kind of a different type of evolution than most film franchises I’ve seen. Our movie isn’t a sequel to either the first movie or the TV series. It’s really more its own stand-alone chapter that lives within the Spirit world.”

The director also explains that the Spirit horse featured in the movie isn’t the same one that was the focus of the original 2D animated movie. “Our horse is the one from the TV series, who has the white stripe down his face. It was always said to be kind of the same lineage, but for a new generation. We wanted this to be a new generation and to bring something new to the audience, who are both fans of the TV series, fans of the movie and newcomers. So we needed to reach all of these different parts of the audience and provide all of them with something new and something different, which is a challenge when you are basing your story on existing characters.” 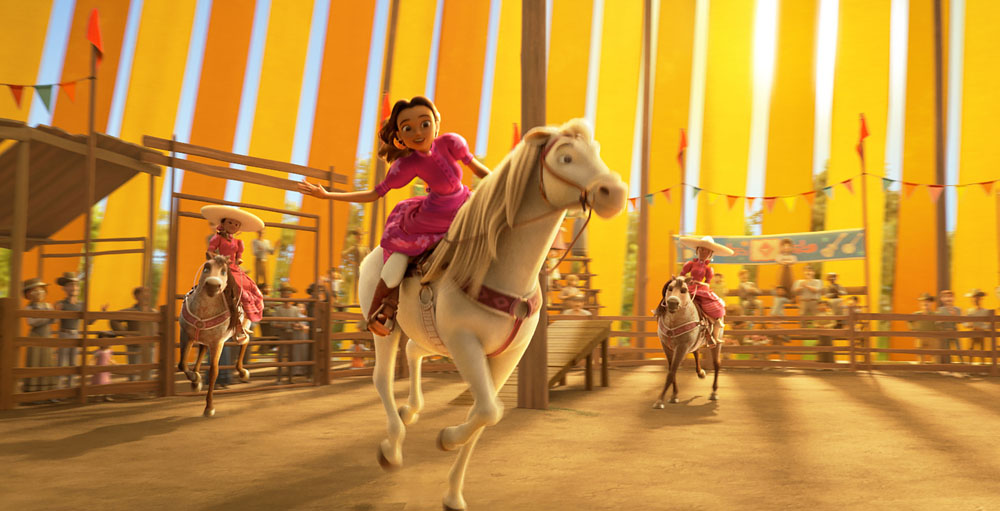 That reimagining meant exploring Lucky’s Mexican heritage, her history as the daughter of an adventurous mother who is no longer with her and a difficult relationship with her father. Bogan especially liked the history of the TV series in which real life problems faced by young children were explored and discussed. She says they wanted this kind of grounded storytelling to be part of the film.

Bogan says she has been riding horses since she was about nine years old. She took on the project having already forged a strong bond over many years with her own horse, Ziggy Stardust, who lives close to the DreamWorks campus. While she knows her own horse from nose to tail, she realized that the film’s crew would also need to get to know horses the same way before they set off to create the animation. 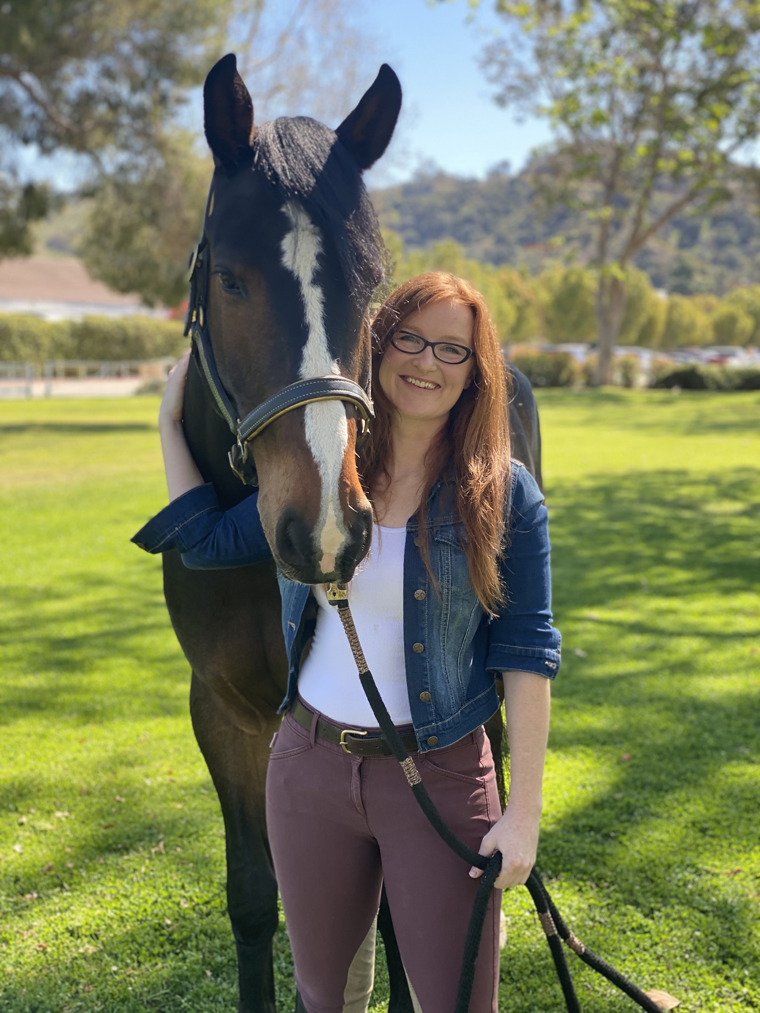 “You know, horses are renowned for being one of the most difficult things to animate,” says Bogan. “It was a lot of research and we actually took some really amazing, amazing seminars from Dr. Stuart Sumida, one of the industry’s most famous anatomy experts. He came into the studio and taught us a lot. We owe a lot to him for teaching us about proper leg movements and gait and how horses walk, trot, canter — and showing us how it all works.”

Sean Sexton, Spirit Untamed‘s head of character animation, who has been working on DreamWorks movies for almost two decades, adds, “The other thing that really helped us was that Elaine’s horse lives five minutes away from DreamWorks. So we actually had one outing before COVID where we just went to the stables and Dr. Sumida was there and we would just watch horses. And then Elaine and I went horseback riding. It was my first time ever on a horse and I thought it was so informative to feel a horse’s body and understand how his weight shifts as it moves.”

Some of the stylistic choices that were made included creating characters with bigger eyes, rounder faces and — as in the 2D movie and Netflix series — giving Spirit eyebrows so that the horse could be more expressive. These adjustments were made so that the characters that would play well in a theatrical setting and connect with audiences. Both Sexton and Bogan agree that these alterations somehow made the characters more engaging and relatable.

Bogan says she loved the history of the characters and was thrilled with the background the crew was able to discover. “We also wanted to be sure that we were creating a new look that would transport the story from the small screen to a big one”

“We already had some really great groundwork done for us with the look and the design of the characters in the TV series, but when a TV series is designed, it’s designed for a screen that’s about the size of a laptop screen,” says Bogan. “People are going to be watching our story on a larger screen. But we knew we had a challenge, in a way, that we needed to stay within that sort of boundary, but we also needed to design something that was going to look great and invite the audience into the environment, and feel tactile and 3D enough on a giant 50-foot theater screen.”

Bogan and her team did a lot of research to make sure the film’s environments had the right mix of realism and animation artistry. “I remember my production designer Paul Duncan and I first started taking out all our old travel photos,” she notes. “He and I are both nuts about going to every National Park, or traveling to Europe and photographing everything.”

Duncan wanted to find a look for the environments that felt like they could be anywhere. “It’s not necessarily specifically this part of Europe or this part of America, so that it can reach people all over the world,” explains the director. “Once we started doing that, we found a style for the environments that we thought would hit the screen and be atmospheric and rich enough to just bring people right along on the adventure. Because those environments started to get a little more 3D, a little more detailed and cinematic, we had to then adjust the designs and the look of the characters and the horses as well so that they felt like they could live in that space and be believable.”

Jellyfish Pictures executive producer Luke Dodd points out,  “From the start, we knew Spirit Untamed was going to be a special project. The story, characters and beautiful designs really gave our artists a lot to work with and get expressive, delivering truly beautiful results with a lot of heart. Even though our team were all working across the globe, which at its height of the production was around 350 artists, we were on this journey together. I’m so proud of what each and every one of them, and Jellyfish have achieved. Working with Elaine, Ennio, Sean and the whole DreamWorks team, as always, was such an inspiration. Seeing the culmination of everyone’s hard work, devotion and love on the big screen is going to be an incredibly emotional and rewarding feeling for all!”

Bogan says she’s grateful that somehow the stars aligned so that everyone who joined her team had at least one element in the story that they felt deeply passionate about. “I hope that as a result, when people see the movie they feel that the story and the characters are relatable and believable. I hope all of our collective life experiences have been infused into the film for the audience to enjoy.”

Spirit Untamed storms out of the stable in U.S. theaters on June 4.