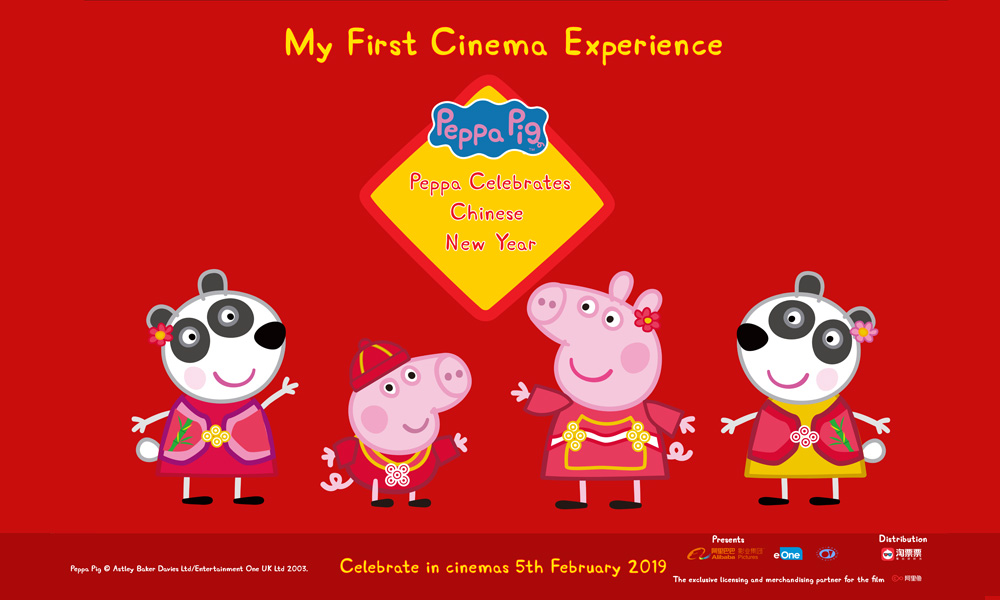 Entertainment One (eOne) and Alibaba Pictures Group Limited are planning their first co-production project, which will give hit preschool property Peppa Pig its big screen debut in cinemas across China. The loveable porker and pals will hit theaters during Chinese New Year (Feb. 5, 2019) — coinciding with the 2019 Year of the Pig. The full-length feature film, titled Peppa Celebrates Chinese New Year, will contain both live action and new animated content based on the TV series created by Astley Baker Davies. Alibaba Pictures is distributing.

“This cooperation is an important opportunity to promote cultural exchange between China and the West. Alibaba Pictures is excited to share China’s traditions and culture with the rest of the world with a new fun filled storyline featuring a character as popular as Peppa. The Peppa Pig series emphasizes the importance of family values, and that is something that will deeply resonate with Chinese audiences. We hope this family film will pave the way for further development of films for young audiences in China,” said Wei Zhang, president of Alibaba Pictures.

The film’s story has been crafted for young families celebrating Chinese New Year, and incorporates many of the holiday’s traditions — such as dragon dancing, dumpling wrapping, and other customs. Peppa Celebrates Chinese New Year will also introduce brand-new characters, including twin panda siblings. Limited edition panda-themed merchandise will be released exclusively through Ali Fish, the licensing and entertainment unit under Alibaba Pictures.

“There is a huge fan base for Peppa Pig in China, so we’re thrilled with the prospect of bringing the brand’s first ever theatrical release to cinemas in the region in early 2019,” said eOne’s Olivier Dumont, President, Family & Brands. “We’ve worked closely with Alibaba Pictures to create content and cinema-themed merchandise with special cultural significance that will resonate with Chinese audiences. We look forward to delighting Chinese families with an unforgettable cinema experience when the film opens next year.”