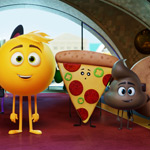 A key moment in international movie history took place last month when officials in Saudi Arabia announced December 11 that the country would be lifting its 35-year ban on public cinema screenings. At the time of the announcement, Minister of Culture and Information Awwad bin Saleh Alawwad said:

“Opening cinemas will act as a catalyst for economic growth and diversification; by developing the broader cultural sector we will create new employment and training opportunities, as well as enriching the Kingdom’s entertainment options.”

Local reports initially guessed that screens would open up in March, but the rubicon has already been crossed by two US animation releases. On January 13, Sony Pictures Animation’s The Emoji Movie became the first film to receive a public showing in the country as part of a double feature with DreamWorks Animation’s Captain Underpants: The First Epic Movie, according to Reuters. Both films are in consideration for Oscar nominations in the Animated Feature category. The screenings took place at state-sponsored temporary movie theaters.

The move to bring movies back to the country is in line with the “Vision 2030” plan spearheaded by Saudi Arabia’s Crown Prince Mohammed bin Salman Al-Saud, who has been making waves “dragging the country — with Western critics kicking and screaming — into the 21st century,” as Arabia Foundation exec director Ali Shihabi told BuzzFeed News in November. The Prince’s MiSK Foundation notably backs Saudi animation/games/comics co. Manga Productions.

The first permanent cinemas will open this spring, with a national goal to build more than 300 to offer 2,000+ screens around the country by 2030. While the overall ban is being lifted, the government will be censoring films to ensure compliance with local cultural standards. The ban was originally instituted to discourage public meeting and mingling between men and women.

The news comes as US audiences are primed to welcome the first animated feature fully financed and produced in Saudi Arabia, Barajoun Entertainment’s Bilal: A New Breed of Hero, which will be released by Vertical Entertainment next month.