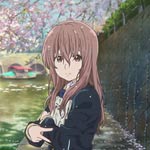 Last October, fans of emotional animated features were treated to a theatrical run of Annecy-selected anime A Silent Voice in the original Japanese. Now, the English dubbed version is making its debut through Eleven Arts Anime Studio in North America on February 2. Submitted for Oscars consideration, the film explores universal themes of regret and redemption and has won over audiences and critics alike.

The film is produced by Kyoto Animation and based on the manga by Yoshitoki Oima.

Synopsis: A Silent Voice follows the poignant and moving story of Shōya Ishida, a school bully, and Shōko Nishimiya, a young girl with a hearing disability. Their story begins in sixth grade when Shōko transfers to Shōya’s elementary school and quickly finds herself bullied and isolated due to her hearing disability. Years later, the tables turn, and Shōya finds himself the victim. A Silent Voice depicts the struggles and challenges of adolescence alongside coming-of-age outside the norm.

Tickets are on sale now. Theater information available at www.elevenarts.net/sales/et.