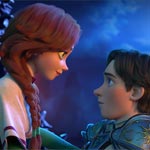 FILM.UA Group announced from the European Film Market that it has closed a new deal for Ukrainian animated feature The Stolen Princess to Bohemia Motion Pictures for theatrical distribution in Czech Republic and Slovakia. The distributor also picked up rights to the time-travel fantasy-adventure The Stronghold, from Kinorob.

The Stolen Princess is set in the age of valiant knights, beautiful princesses and battling sorcerers. When Ruslan, a wandering artist dreaming to become a knight, met beautiful Mila and fell in love with her; he didn’t even suspect that she is the King’s daughter. However, the lovers’ happiness wasn’t meant to last very long. Chоrnomor, the evil sorcerer, appeared in a magic vortex and stole Mila right before Ruslan’s eyes to transform her power of love into his own magic power. Without further ado, Ruslan sets out on a chase after the stolen princess to overcome all obstacles and to prove that real love is stronger than magic.

Adventure Begins on Cartoon Network’s ‘Craig of the Creek’ Feb. 19
Planet Nemo Picks Up ‘Harvie and the Magic Museum’

Exclusive Clip: 'SamSam' the Next Big Hero Rockets to Digital & On Demand

A pint-sized hero with the power to win over the hearts of kids and family ...

Did you hear there’s yet another adult animated show aiming to stretch the limits of ...