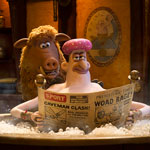 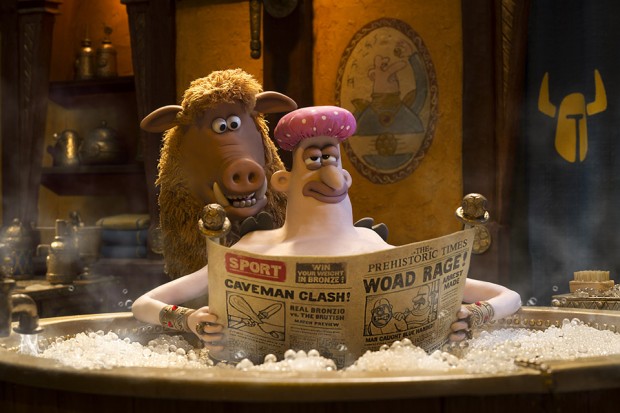 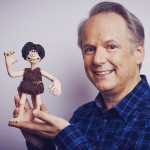 Early Man, the new stop-motion epic from director Nick Park and this team at Bristol-based Aardman Animations, centers on a soccer-playing caveman with a heart of gold.

In a cinematic landscape dominated by sequels and superheroes (especially superhero sequels), subjects like soccer and cavemen rarely crop up on the big screen anymore. But Early Man, an upcoming stop-motion feature about soccer-playing cavemen from British studio Aardman Animations, may be about to change all of that.

The brainchild of Wallace & Gromit creator Nick Park, Early Man is a classic underdog caper featuring an enthusiastic caveman called Dug (voiced by Academy Award-winner Eddie Redmayne) who must learn to play soccer — or, in British parlance, “football” — in order to save his tribe from the dastardly intentions of the Bronze Age army and their nefarious leader, Lord Nooth (a French-accented Tom Hiddleston).

Despite being technically arduous to capture in stop-motion, soccer was deliberately chosen by Park over other sports, in part because of the intense devotion it inspires across the world (especially in Britain), which meant it worked neatly as a metaphor for war. “I think originally it was just the idea of cavemen with their clubs,” he says of his inspiration for the wholly original plot, which he first conceived almost a decade ago. “What if they can’t use their brute force and their clubs and weapons and spears, and have to play a game that demands discipline?”

Discipline is a subject Park knows plenty about, given that his forte is clay stop-motion, an art form demanding the utmost in patience and diligence. The Early Man crew included around 35 animators, each painstakingly producing around five seconds of footage a week. “With that many animators, it clocks up. A week can be a minute of animation,” Park says, adding with a chuckle: “That’s storming through it!”

A Caveman at Heart

For Redmayne, who visited the set in Bristol last year alongside co-star Maisie Williams, watching the crew animate the puppets — which are made from a mixture of plasticine and silicone on a wire ball-and-joint armature — was “absolutely spectacular.” “It’s like a magical world and your inner nine-year old is having the greatest time of his life,” he gushed of the experience. “I also felt overwhelming guilt because, as the actors in animated films, over 18 months you do a day’s work every month or something, and then you realize how much work goes into bringing to life the bit you’ve been doing.”

Williams, a long-term Aardman fan who cites Chicken Run as one of her all-time favorite films, was equally blown away by the experience. “It’s just incredible, the work and the amount of people that it takes to make one movie,” she says. As with most animated features, Williams and Redmayne recorded most of their dialogue separately, although they took the opportunity of their joint set visit to jump into the studio’s live action video unit — where Park can usually be found acting out the script as a guide for his animators — to record some scenes together. “We needed to get a bit method,” Redmayne quips. “Get in there and get a bit in character. They encouraged me to kick a football, but I thought for the sake of everyone’s health that was a really bad idea.”

“I really think the scenes we did together ended up being some of my best,” says Williams, who provides the voice of Goona, a gifted athlete prevented from playing soccer professionally because she’s a woman. “Because [Eddie] really brought a lot of character out of me that I was quite nervous and scared to do.” Best known for playing Arya Stark on Games of Thrones, voicing an animated character represented a new challenge for the actress. “I just had fun with it, really,” she says. “Nick’s way of working was so different to anything I’d ever done before because of the nature of the job and using only your voice and no facial expressions or body movement. It’s very different.”

Return to the Past

To some extent, Early Man was an entirely new experience for Park, too. While he has previously directed animated clay features such as Oscar winner Wallace & Gromit: The Curse of the Were-Rabbit and Chicken Run, the ambitious scale of Early Man presented fresh challenges. “That’s what’s exciting,” he says. “Both exciting and challenging — it’s a whole new world.”

Early Man is Park’s first film since Wallace & Gromit to feature a human protagonist and, as well as introducing the audience to a whole cast of new characters, the crew needed to create vast landscapes, backdrops and set pieces on a far bigger scale than Park’s previous films had necessitated. One of Early Man’s largest sets, the soccer stadium, towers over the animators at almost 10 feet tall and features a mesmerizing plethora of detail, such as soccer ball motifs in the ground and on the building, which many viewers probably won’t even notice but gives the set a depth and richness.

Then, of course, there are the technical aspects of trying to shoot a stop-motion feature about soccer, a sport which requires 22 players on the pitch, tens of thousands of fans in the bleachers, and a ball continuously being kicked to and fro, all of which needs to be captured one frame at a time. “Funnily enough, the bouncing ball is one of the tests that many animators will do very early in their career,” says animation director Will Becher wryly. “Which is something you don’t think you’re ever going to use.” Fortunately, the Early Man crew included an industrious rigging department, who were tasked with everything from making soccer balls fly through the air to supporting armor-clad mammoths so mammoth they required scaffolding.

“There’s much more of a mixture of clay, puppet animation and digital backgrounds, and also the fact that so much of a part of the story happens in a stadium,” Park agrees. “How to make that and marry those two worlds together so they work? And there are lots of technical restrictions.”

Other than swapping out painted cloth backdrops for green-screens, however, Aardman’s methods have hardly changed in the 41 years since the studio’s inception. “I would say the only major difference is that we shoot digitally rather than on film,” says supervising art director Richard Edmunds. “Because the processes are very much the same as they have been right through [from] when Nick Park was starting on his Wallace & Gromit adventures, and Morph [created by Aardman co-founder Peter Lord] with his plasticine, he’s still made exactly the way he was 40 years ago.”

What makes Aardman’s commitment to clay all the more extraordinary is that in addition to the labor-intensive nature of stop-motion production, which requires each puppet to be micro-adjusted multiple times per shot, there are the very practical challenges of working with the material. “The plasticine has a tendency to pick up dirt and dust,” explains Nigel Leach, team leader of the puppet-making department. “It’s a constant process of renewing the mouth sets and repairing the heads whenever it’s needed.”

But for Park, who calls himself a “clay man” at heart, getting his hands dirty is one of the best things about working with plasticine. “I love the texture and don’t apologize at all for the fingerprints and the boiling fur that you get,” he says. “It’s all part of the charm.”

StudioCanal releases Early Man in the U.K. on January 26. Lionsgate will open the film in the U.S. on February 16.