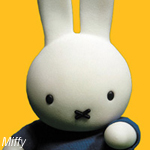 Miffy, the most popular animated white rabbit from the Netherlands, is coming to the big screen in her first feature film.

Telescreen Filmproductions and Mercis, which manages the rights to the work of Miffy’s creator, Dick Bruna, have joined in this project with Warner Bros. Netherlands and Dutch public broadcaster KRO Television. The production is supported by the Netherlands Film Fund and CoBO Fonds, which are both involved for the first time in making an animated film. The development of the film has been supported by the MEDIA Programme of the European Community.

Hans Perk from the Netherlands is directing the movie from a script by American writer James Still. Production of Miffy’s first feature film has already started in collaboration with A.Film Production in Denmark and a team of stop-motion animators in Latvia. The film is expected to be completed in 2012 and ready for a worldwide release in early 2013.

The feature is an obvious extension of the brand’s success on television with the 3D animated series Miffy and Friends, which has produced 78 five-minute episodes and several specials. The series aired in the United States on Nick Jr. from 2003 to 2007.

The character was created in 1955 by Bruna for a series of children’s books that has grown to nearly 30 volumes.