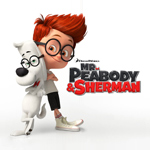 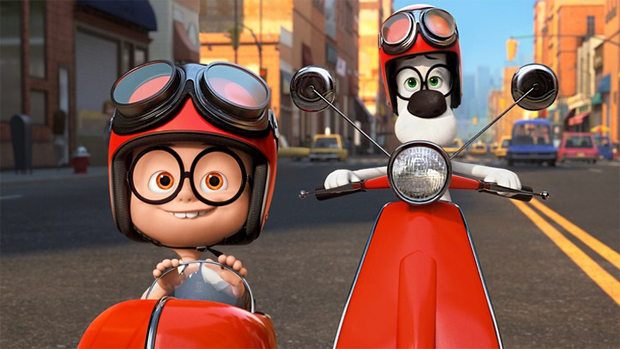 DreamWorks Animation offered members of the international and national press a great selection of scenes from the studio’s March release Mr. Peabody and Sherman earlier this week. The screening, which was presented by the film’s award-winning director Rob Minkoff (The Lion King, Stuart Little) and was followed by a Q&A with Minkoff, producer Tiffany Ward (Jay’s daughter) and actor Ty Burrell (Modern Family), who voices Peabody, left the audience at the Fox Studio’s Little Theater wanting to see more of the beautifully animated, well-paced comedy adventure.

The 3-D, CG-animated movie, which comes out March 7, 2014, is based on the popular Peabody’s Improbable History segments featured on The Rocky and Bullwinkle Show in the 60s. With a script by playwright and TV writer Craig Wright (Lost, Six Feet Under), the movie chronicles the adventures of erudite canine Mr. Peabody and his adopted human son Sherman (voiced by Max Charles) as they search for Sherman’s missing classmate Penny (Ariel Winter) through history, via the time-traveling WABAC machine. The voice cast also includes Ellie Kemper, Stephen Colbert, Leslie Mann, Allison Janney, Stanley Tucci as Leonardo Da Vinci and Mel Brooks as Sigmund Freud!

Minkoff introduced several of the the film’s funny and action-packed sequences, including an early scene in which we see Peabody and Sherman’s swank Manhattan penthouse and learn how Sherman loses Penny after he shows her the WABAC time machine. Other sequences find the duo in ancient Egypt, where they meet a young King Tut, in Renaissance Italy where they help Da Vinci get the right smile out of Mona Lisa and in ancient Greece where Sherman joins Agamemnon’s testosterone-heavy band of warriors. A beautiful scene involving the characters’ soaring above Florence on Leonardo’s famous flying machine is going to look especially fantastic in stereoscopic 3-D. The Manhattan opener also delivered just the right mix of debonair sophistication, slapstick humor while explaining the conflict about Sherman not being able to fit in school because he is, after all, the adopted human child of a very worldly and well-traveled dog.

Tiffany Ward said she got involved with the film about ten years ago when Minkoff came to her with the idea for the movie. “What better caretaker for the characters could we ask for than Rob…it took us a while to get it right, because we wanted it to be perfect,” she said. “My whole job was to make sure they stayed true to the integrity of the characters, and Rob was on board with that legacy from the very start, and I think you can see that they are very true to the original cartoon.”

Actor Ty Burrell said it was lot of fun to come up with the voice of the brilliant Mr. Peabody. “I knew I had huge shoes to fill because Bill Scott (the voice actor who played the character on the TV series) was an incredible actor. It’s fun to play someone that you’re not—which in my case, is someone who’s very sophisticated,” he joked. Minkoff said they decided to use an actor who had the right voice for the modern version of the character “His voice really embodied all the different aspects of the character today,” he noted. “Not just the intellect and the suave personality, but the underlying warmth as well.”

Ward then recalled an incident that illustrated how in tune the production team was with her father’s creative vision. “They showed me the storyboards for Peabody and Sherman’s home, and it looked just like the house my dad had build,” she said. “His favorite building was the Seagram building in New York, and their designs looked like their place was right atop the Seagram building too…It was eerie, because they no way of knowing this. It just shows how connected Rob and I were!”

Both Burrell and Minkoff hope the movie will spark interest in historical figures in young moviegoers. “When I was a kid, I learned so much from cartoons, whether it was classical music from Bugs Bunny cartoons or historic figures from the Peabody and Sherman cartoons,” said Minkoff. ” Ultimately, when you are making stories or movies where kids are the audience, it’s really important not to talk down at kids. A lot of time people say ‘Oh well, they are never going to know this, but I say, How else are they going to learn? Of course, they are going to have to hear it somewhere. My hope is that they’ll see it in this movie and they’ll get more interested in it. I was the beneficiary of great teachers when I was in school, I had great teachers who knew how to bring history to life, in the way that they told compelling stories with interesting characters.”

All the Right People and Places

The director pointed out that in the beginning of the filmmaking process, they had to decide whether to have the characters lost in one single historic episode or opt for a series of times and places. “Ultimately, we chose the figures and times that helped us tell stories in a metaphoric way; that had reflections on the characters and helped the overall story,” he said. “We can do an entire movie cut together from the places that we decided not to go. It was a process of whittling out the ones that didn’t world.” (He said Nazi Germany was one of the places they chose to leave out, for example.)

Minkoff also said that it was really important for him to stay true to the spirit of the original cartoons and the characters. He said he actually believed these cartoon characters were real when he was a young fan boy. “They really become part of you when you watch them as a kid. Of course, the TV show had limited animation, and it was a different from, but we really wanted to be true to the characters and the stories.”

Ward was tight-lipped about future adaptations of her father’s beloved properties, such as Rocky and Bullwinkle and Fractured Fairy Tales, but she did confirm that fans cane expect to see several new projects coming in the near future.

You can check out the new trailer for Mr. Peabody and Sherman on Apple.com or watch it below:

The Fox/DreamWorks movie opens in theaters on March 7, 2014. You can also find Classic Media’s DVDs of The Best of Rocky & Bullwinkle & Friends and The Best of Mr. Peabody and Sherman on DVD.

SpongeBob Gets a Facelift for 2013 Macy’s Parade
Fox ADHD Welcomes ‘Lucas Bros.’ and ‘Golan’ in January