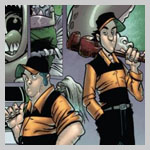 DreamWorks Animation has turned to comic books for inspiration — optioning the graphic novel series Maintenance, about a pair of janitors who clean up the messes left behind by their mad scientist bosses at TerroMax.

The comic was created by Jim Massey and Robert Rodriguez and first published by Oni Press in 2006. There are currently three volumes in the series.

According to The Hollywood Reporter, the studio picked up the project out of turnaround at Warner Bros., where it was being developed for director McG to tackle. The project arrives at the studio with no writers, producers, directors or actors attached, so expect it to take a while before this one hits the screen.