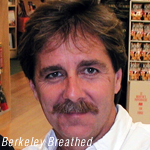 Breathed, who rose to fame as the creator of the popular 1980s comic strip Bloom County and has since transitioned to books, also penned the book that Disney has adapted into the animated feature Mars Needs Moms, due out next month. He will be an executive producer on the project.

Flawed Dogs is about a dachshund who is wrongly exiled by a jealous dog show and must find his family and reclaim his spot.

“All my stories are sparked by a nugget of truth hiding in plain sight,” Breathed said in a statement. “In this case, it’s that all animals dream … but only dogs dream of us.”

Overseeing the project for DreamWorks is head of development Alex Schwartz and development executive Damon Ross.