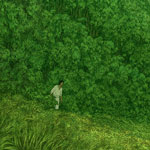 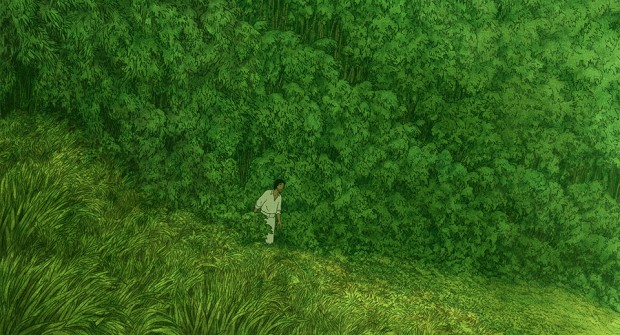 The Red Turtle, the first feature by Oscar–winning director Michael Dudok De Wit and the first international collaboration by the renowned Studio Ghibli, presents an outwardly simple story that can be read on many levels in ways that recall the work of Frédéric Back, Jiri Trnka and John and Faith Hubley.

Moving, thoughtful and thought-provoking, it invites the viewer to reflect on man’s place in the world, his relationship to nature, the recurring cycles of life. Its simple yet striking visuals stand in marked contrast to the lavish studio CG features of recent years. The Red Turtle won a Special Jury Prize at Cannes, beating 17 live-action films.

Dudok De Wit was already a well-respected figure in international animation for his droll short The Monk and Fish (1994), and the poignant Father and Daughter (2000), which won the Grand Prix at Annecy, Hiroshima and Zagreb, and the Oscar for Animated Short. He had considered making a feature, but felt his personal, intuitive approach to filmmaking would clash with the collaborative methods of studio production. All that changed when he received a letter from Isao Takahata and Toshio Suzuki of Studio Ghibli, asking if he would be interested in making a feature with them.

“It was one of the biggest shocks of my life,” Dudok De Wit said in a recent telephone interview from London. “I love Miyazaki’s and Takahata’s work, then to receive a letter from Ghibli out of the blue, that just doesn’t happen! Yet it happened to me. My immediate reaction was, ‘Yes! This is my chance!’ Ghibli is very auteur film oriented, they respect the director.”

Suzuki explained, “Seeing his film Father and Daughter made me want to watch a feature-length film by Michael. Therefore, I asked if he would be interested in making a feature for Ghibli. His condition for agreeing to do this was that Studio Ghibli would provide creative guidance. I got Isao Takahata’s consent to be involved and the project took off.”

Like many artists before him, Dudok De Wit realized the leap from short films to a feature would require a steep learning curve: “Father and Daughter lasts eight minutes and took me two years to make. The feature film is 80 minutes —10 times longer — and I knew it wouldn’t just be 10 times the amount of work spread over the team: It would be much more.

“In a short film you have one idea, in my case supported by one musical composition, that’s it,” he says. “I elaborate the idea until it’s reached its natural end, whether that takes four minutes or eight. When you make a feature you can explore the characters, the landscape, the ambiances. You can use repetition and explore differences in motions. I work intuitively. For a short film, that’s easy, but a feature film is more complex.”

Spreading the Work Around

The shift to the longer format also meant Dudok De Wit would be working with a crew of animators and background artists, rather than making the film by himself. He would also be making the film in France, but visiting Japan to confer with Takahata and Suzuki. The collaboration occupied him for almost 10 years.

“I’m basically an animator. I sit down and animate for eight to 12 hours in one go. I always worked that way,” he says. “But when you’re a director, you’re spread all over, you’re interrupted all the time, you’re divided between tasks and every task is incredibly important because people are waiting for your opinion. I needed to learn how to verbalize my concerns and my wishes. It took me a long time to adapt to a new way of using my brain.”

Dudok De Wit decided to recount the adventures of a lone man shipwrecked on a small island somewhere in the South Seas. The challenges of making a feature were further complicated by the decision to make the film without dialogue, an idea that evolved as he refined the story with his co-writer, French filmmaker Pascale Ferran.

“When I decided to present a castaway, alone in nature on a deserted tropical island, I immediately decided not to have him talk to himself, as Tom Hanks does so beautifully in Castaway,” he said. “But I thought the story needed some dialogue, especially when the man and the woman meet. I imagined the woman would be silent because she is from nature, but the man would say something.

“We have no idea where the protagonist is from; which century, which culture, which background, which place in society,” he says. “We know nothing about him, but if he opens his mouth and says something, it makes us jump, ‘Oh, he speaks English?’ ‘Oh, he’s French?’ It didn’t feel natural.”

As they continued to develop the story, Dudok De Wit and Ferran reduced the dialogue to a few sentences. “I got an unexpected phone call from Studio Ghibli — I later found out it was mostly Suzuki’s idea,” he says. “They said, ‘We’ve looked at the sentences and the animatic, and we think the film would be even stronger without dialogue.’ We talked about it for a little while, and I felt really excited: If they think we can do without any dialogue at all, I’m interested in the challenge.”

The lack of words put more emphasis on the animation than the project would have otherwise demanded. “To compensate for the absence of dialogue, the acting had to be beautiful and clear at the crucial moments,” Dudok De Wit says. “When the man and woman meet — when anyone else would speak — the body language had to be eloquent enough to compensate for the absence of dialogue.”

Credit to the Crew

A slight note of chagrin crept into Dudok De Wit‘s voice when he admitted he didn’t do any of the animation, unlike his earlier films. “I retouched some animation here and there. I also retouched a lot of backgrounds, because the perfectionist in me wanted to add a little bit of color here and take away a bit color there,” he says. “But I didn’t animate a single scene or paint a single background. I didn’t have time. I was the director and designer of the film, and all of the questions came to me. All the images on the screen are were done by the crew, not me.”

Although he takes pride in having made The Red Turtle to length and on budget, he sounds more excited by the experience of working with the Studio Ghibli artists than by the rave reviews and awards buzz the film is earning: “There were numerous moments where I would sit there and I say to myself, ‘Do you realize you’re sitting in Japan at a table with Isao Takahata and Toshio Suzuki talking about the film you’re going to direct?’”

The response from Takahata, who served as artistic producer on The Red Turtle, indicated that the respect is mutual: “After Father and Daughter, Michael has succeeded again in depicting the truth of life, simply yet profoundly, and with real heart. It is an astonishing accomplishment.”