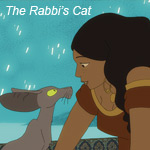 Prolific French comic-book artist and film director Joann Sfar discusses the real-life inspirations behind The Rabbi’s Cat and his love for American classics.

Joann Sfar, the celebrated French comic-book artist and director of the animated film The Rabbi’s Cat, had harbored dreams of writing about his grandmother’s tales of life in Algeria in the 1920s for a long time.

The traditionally animated film received raves in its home country for its fluid animation and its clever take on life in the former French colony. It was awarded the César (French Oscar) for best animated feature and walked away with the Best Animated feature Crystal at the Annecy festival in June. Last month, the film was also nominated for two Annie Awards (Best Feature, Best Director) in the U.S. and is one of the key contenders in the Oscar race as well. American audiences will get the chance to enjoy Sfar’s whimsical animated fable this month as indie outfit GKIDS releases The Rabbi’s Cat in select theaters. 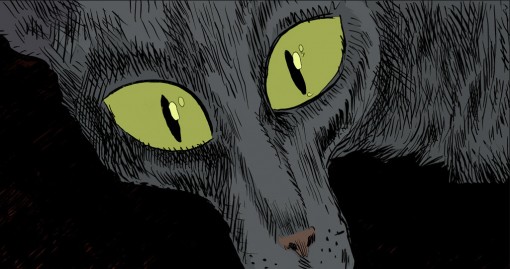 As Sfar explained to us last month, many of the characters and storylines of the comic books and the movie are drawn from his own life.

“My father’s side of the family are Arabic-speaking Algerian Jews, whose interactions are inexhaustible sources of drama, humor and reflection,” says Sfar. “The cat is my actual cat—he is sitting on my desk at the moment as I speak to you. And the rabbi’s daughter in the film resembles my grandmother, Esther Malka. Malka of the Lions in one of my great uncles who was a lion tamer in the Atlas Mountains.”

The film’s plot follows the first three books in the Rabbi’s Cat graphic novel series, which was first published in 2002. In the movie, the cat swallows the annoying and talkative parrot of his owner and develops the magical ability to speak. 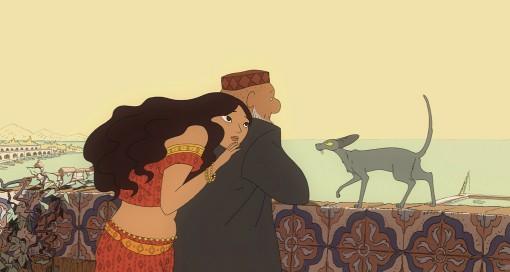 “That’s when the rabbi becomes worried,” says Sfar. “He thinks to himself, I cannot leave this guy with my daughter anymore because he’s no longer a cat. He can be a bad influence.’ So the cat does his best to prove he’s still a good cat, and says, `OK, maybe I can become Jewish. Maybe I can become a Jew, so you’ll be happy. I can have a bar mitzvah or something.’ The cat only wants to please his master and to keep on living on the knees of the mistress, and that’s all!”

A Fan of the Classics

The 41-year-old, Nice-born artist finds his inspiration in the works of renowned artist Marc Chagall, French comic-book artist André Franquin (Spirou, Gaston), American comic-book icons Will Eisner (The Spirit) and John Buscema (Marvel), and Italian artist Hugo Pratt (Corto Maltese). Like Chagall, Sfar believes that if you put someone in a painting or a work of art, you can keep them safe from the ravages of time and the physical world.

“My grandfather liked superhero comics very much, and he used to buy me Jack Kirby’s comics like The Fantastic Four and Spider-Man every week,” Sfar told National Public Radio last year. “The great thing about those comic books was that you could buy a lot of them. Every week I had a lot of them to read, and you could bring these softcover American comic books to school.” [As opposed to European ones that are more expensive and come in hardcover.] 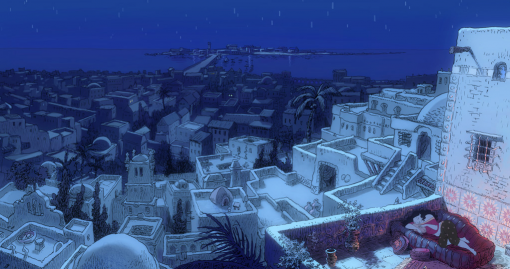 When asked to pick his favorite animated films of all time, Sfar selects Disney’s Robin Hood and 101 Dalmatians.

“I am a huge fan of the Golden Age of Disney, when they did their drawings in pencil,” he explains. “I also love Ken Anderson’s watercolors and Mary Blair’s gouaches.”

Sfar finds the current animation scene quite interesting as well.

“The Lorax and Despicable Me proved that we can make animation here in France with American standards. Films like ParaNorman or the works of Aardman Animations prove that the public is interested in different techniques beyond CGI. And… can I be honest? The two best studios in the world, DreamWorks and Pixar, are in a transition period where they are obliged to invent new things so they don’t repeat the same film all the time. More than ever, even in its business aspects, animation needs inventiveness and artists. I’m very curious to find out what will happen in the coming years.” 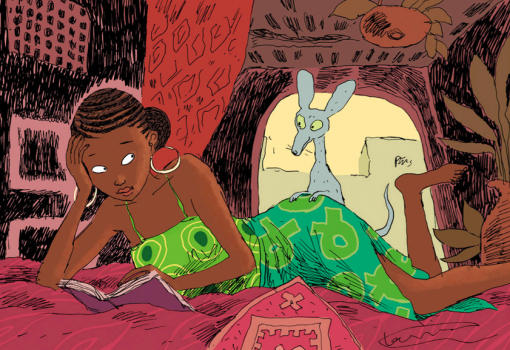 The helmer formed Autochenille Production five years ago along with co-director Antoine Delesvaux and Clément Oubrerie with the aim to make “author-driven, challenging films to appeal to children and adults.” The Rabbi’s Cat, which is the company’s first project, was made in collaboration with TF1 and France 3 with a 12.5 million euro ($16.1 million) budget. It is the second film directed by Sfar, after the live-action bio Gainsbourg (Vie héroïque).

Influenced by the classic animated films of the Fleischer Studios such as the Popeye the Sailor and Betty Boop shorts, Sfar says he took the path of animation to share his message to a wider audience.

“I wanted to give the cat an opportunity to go and talk to families. Cinema was the best medium for this story, which is about tolerance.” 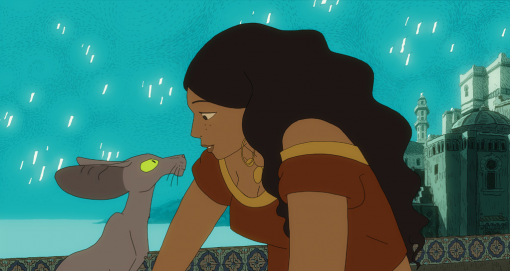 It’s interesting to note that the filmmakers actually staged some of the scenes in a Parisian suburban loft in the summer of 2008, complete with props and the actors in period costume. The design team observed the performances by the actors and drew what they saw in order to get the motions right and create authentic movements for the animated characters. Also bringing added authenticity to the film is the evocative soundtrack by Olivier Daviaud, performed by popular French musician Enrico Macias and the Amsterdam Klezmer Band.

Looking back at the whirlwind success of this highly personal film, Sfar says he is happy that he was able to talk about religion in an ironic way, but without offending those who are believers.

“I am delighted to be able to talk about my memories of a world where Jews and Muslims lived side by side without being unrealistically optimistic. It seems to me that stories like The Rabbi’s Cat can help start a discussion. There is a Utopian aspect to my story and my greatest happiness comes from meeting children, Jewish or Muslim, who talk to me about ‘the cat.’”

GKIDS brings The Rabbi’s Cat to the U.S. on January 18.