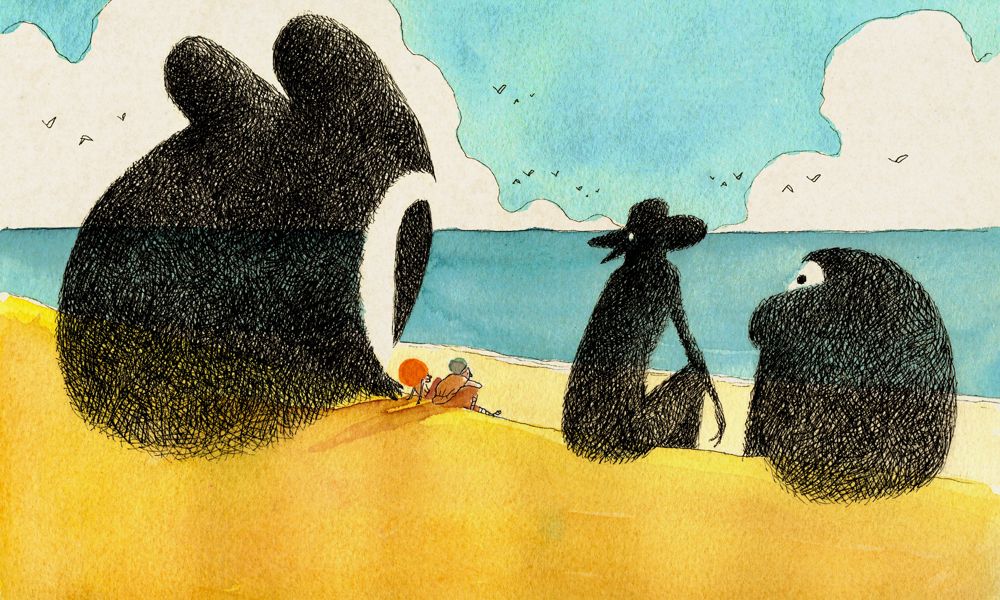 Nicolas Schmerkin, the founder of Paris-based company Autour de Minuit, is having a busy year. Not only is he getting ready for award season with two acclaimed shorts (Alberto Vázquez’s Homeless Home, which is nominated for a Goya prize, and Geoffroy de Crécy’s Annecy Cristal-nominated Empty Places), he is also presenting two movies in development during the virtual Cartoon Movie next week. Oh, and he’s producing Vázquez’s much-anticipated feature Unicorn Wars, which chronicles the age-old war between militarized bears and the dangerous unicorns that threaten them!

Schmerkin, who won the 2010 Oscar for Best Animated Short for Logorama and has produced numerous well-known shorts such as Decorado, Metamorphosis and I Want Pluto to Be a Planet Again, was kind enough to give us the scoop on Shadows and The Midnight King, two innovative and highly original features he’s pitching at Cartoon Movie in March.

Shadows is adapted from a brilliant comic book written by Belgian author Vincent Zabus and illustrated by French talent Hippolyte. “The comic is itself an adaptation of a theater play created years previously by Vincent Zabus together with African migrants, based on their own stories of exile,” says Schmerkin. “It seems that every time this narrative is adapted into another medium (from true stories onto a theater stage, turned to a graphic novel, then to a film), it gains further depth and universality.” 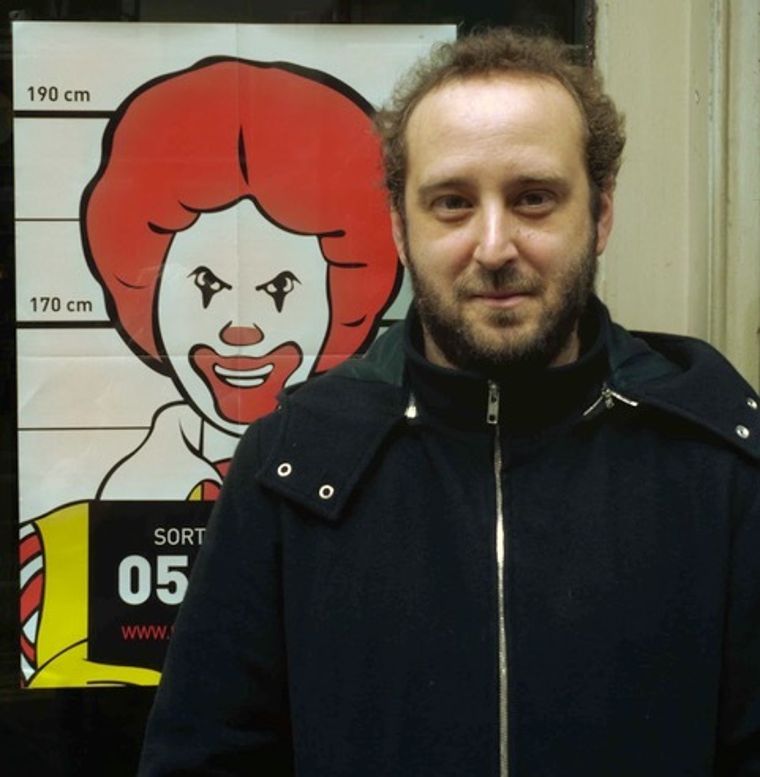 The producer discovered the book in a comic-book store in Clermont-Ferrand during the city’s short film festival three years ago. He recalls, “I was immediately in awe of both the storytelling and the colorful illustrations. I showed the book to Nadia Micault, a talented director and accomplished artist we’d been working with on several shorts and music videos. I was sure that she would love to join this kind of project, and she did. We started the development very recently, mid 2020, when our Belgium co-producers Vincent Tavier and Hugo Deghilage from Panique! started to raise funds and find subsidies for the writing phase.”

According to Schmerkin, everything moved quickly from that point on. “We started the pilot for the Cartoon Movie in October when we got some development money from Europe (Media) and France, and here we are now, with a pilot and a script, ready to start pre-production as soon as we get the financing,” he explains. 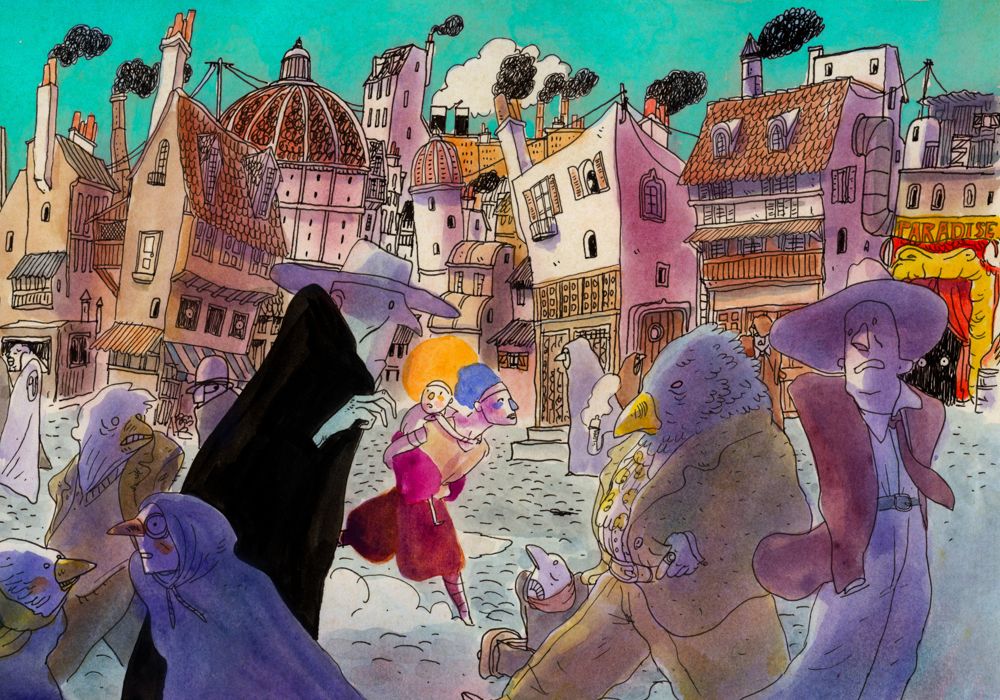 A Potent Mix of Magic and Realism

The producer says he loved the original comic book’s colorful drawings and was struck by the power of the story and how it tackled social issues such as exile, migration and family uprooting and mixing in a dark fairy tale with humor, surrealism and songs. “Shadows is about a 14-year-old boy and his nine-year-old sister who have to leave their home village and embark on an adventure as they look for their father and better prospects,” notes Schmerkin. “Based on true stories, and without sugarcoating or bowdlerizing heartbreaking realities, the immense power of this work is the way it tells a universal story. Animation will bring a touch of softness and a more poetic dimension to the story. The visual universe brings enormous potential to the storytelling for different age groups: While children can connect to the siblings’ relationship and quest, adults will understand the social and political issues.”

Visually, the film will combine some CG elements with a 2D look. “The director works a lot with paper and watercolor and does wonderful backgrounds with a lot of detail and hatching, similar to an engraving style,” says Schmerkin. “Her input will definitely be determining the style of the film, close to her illustrations. Perhaps the closest references would be Miyazaki’s works. At the development stage we are mainly working with both our studio ADV in Paris and our studio Schmuby/Borderline in Angouleme, where we have gathered a great team of experienced talents in feature animations. Most of them have worked on acclaimed feature films such as The Red Turtle and The Bears’ Famous Invasion of Sicily.”

The budget for Shadows is estimated to be around 6 million euros ($7.3 million). Autour de Minuit is co-developing the film with its Belgian partners and long-time friends Panique!, the studio behind movies such as A Town Called Panic and Ernest & Celestine. The producer believes that a third country will probably be necessary to finance the production. “We are already very lucky and honored to have great interest from sales agent Grégoire Melin and his team from Kinology. The project definitely seems to be spiking interest and enthusiasm, the Cartoon Movie will be the first big meeting with the market and we look forward to presenting all our work and development up to now.”

Autour de Minuit’s second feature at Cartoon Movie is The Midnight King, an intriguing feature about a young boy who leaves his troubled home for an enchanted forest, only to discover that the woods are cursed and his fears have followed him there. The timeless, fantastical tale is directed by Oscar nominee Chris Lavis (NFB’s Madame Tutli-Putli) and Maciek Szczerbowski.

“The Midnight King was born out of our long history of collaborating with the musician Patrick Watson, who created the soundtracks and landscapes for our film Nightmare and our VR experience Gymnasia,” says Lavis. “In the development of our films we are generally first inspired by fragments of scenes or images. We collect these fragments, hoping that they will challenge us to create a story around them. For The Midnight King, we also had Patrick’s musical explorations to work with. To our delight, the story revealed itself out of that soup: a musical odyssey about a runaway boy and a girl with silver eyes and legs of glass.”

From there it was a question of finding collaborators and producers who were just as excited to be on the journey with Lavis and his team. “We had been searching for years for the right project to bring to Luc Déry and Kim McCraw at micro_scope in Montreal, and had long admired Nicolas Schmerkin’s eye for films and his studio’s talent roster from our years on the festival circuit,” says the helmer. “They all came on board early and we’ve been developing the movie together ever since.”

Lavis says he has no preferred techniques or dogmas except perhaps one — that the story should always drive the method. “As the story is revealed, so is the method,” he explains. “Because we began the process by drawing — usually we build props and puppets — it became obvious to us that the most emotionally and visually satisfying way of telling the story we wanted to tell was in the medium of drawn, 2D animation.”

The director says this required a leap in thinking. “It was like starting all over again,” he points out. “At first, we thought all the tricks we had learned from stop-motion (from live video animatics to puppet and set building) would be worthless in 2D, but we’ve found just the opposite. Thanks to the affordability of 3D scanners and new production pipelines that integrate CG and 2D, we’ve discovered that many of our stop-motion techniques flow right into a modern 2D pipeline.” 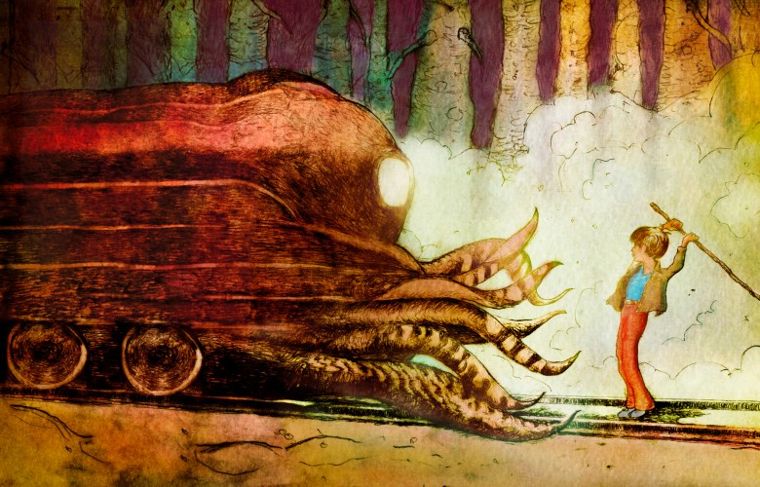 Among the inspirations for the feature, Lavis cites Hayao Miyazaki’s Princess Mononoke, Sylvain Chomet’s The Triplets of Belleville and Disney’s The Rescuers. “All three are features with bold, personal drawing styles,” says Lavis. “However, once we started developing the pipeline with our collaborators, the more we were able to leave these initial references behind and find our own voice in the medium.”

The filmmaker estimates the feature’s budget to be around 10 million dollars. He adds, “It will be a co-production between Canada, France and probably a third country. We are now focused on finishing a two-minute pilot.”

Of course, the animated movie landscape keeps getting busier and more competitive. We had to ask Lavis why he thinks The Midnight King stands out? “Many of this century’s most experimental, outrageous and courageous films have come from artists working in animation,” he responds. “However, there is also a side to our business that is extremely conservative and risk-averse. Feature animation, in particular, has suffered from the perception that animated films must target either an adult or child audience. This false divide limits funders and creators alike. The Midnight King doesn’t fit neatly into either box. We seek an intergenerational, ‘crossover’ audience, children and adults who hunger for an experience that reaches across mediums and categories and speaks to them personally.”

As in many of Autour de Minuit’s projects, music plays an important role in Lavis’ feature. “Animation’s dirty secret is just how important music and sound is to the success and emotional weight of a film,” he explains. “Luckily, we believe, the songs Patrick Watson has written for The Midnight King are some of the best work he’s done in his life. But the prospect of an animated musical is still daunting. For this film we’ve never been more reliant on sound, because Patrick is a co-writer who is building the movie with us from the ground up. That’s frightening and exciting, as all creation ought to be!”

You can find out more about the French studio at autourdeminuit.com.