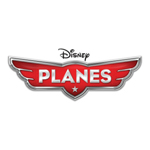 Disney’s Planes takes off thanks to a crowd-pleasing storyline and colorful cast of high-flying characters.

At first glance, Planes, a spin-off from Disney/Pixar’s Cars franchise, might seem a little familiar around the edges, with its talking vehicles––aircraft, this time––that have expressive windshield eyes, who inhabit a universe in which machines are the sole population, not flesh-and-blood people. It’s the “World of Cars” taken to the skies. But anyone who might be thinking this film was a just a quick-and-easy glide off of the course of a preexisting property needs to recheck the flight plan.

Produced by DisneyToon Studios, Planes was intended as a direct-to-video feature before getting the green light for a theatrical release (it opens August 9). For director Klay Hall (Tinker Bell and the Lost Treasure), though, the exhibition venue is not the message.

“At the risk of sounding like something you hear all the time, we were out to tell a really, really good story,” Hall says. “Although we were originally slated to be video, it really doesn’t matter in our eyes or in John [Lasseter]’s eyes.” 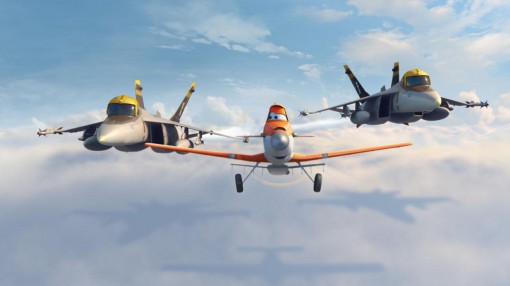 While Pixar was not directly involved in the making of Planes, Lasseter did serve as beneficent overlord for its four years of development and production, and laid down the parameters for working within the World of Cars universe.

“One of John’s mantras when you approach this world,” Hall says, “is that there has to be truth in materials. He just kept pounding on that. You couldn’t have wings squashing and stretching and expanding.”

That required research, and lots of it, including filmmaker field trips to air museums. 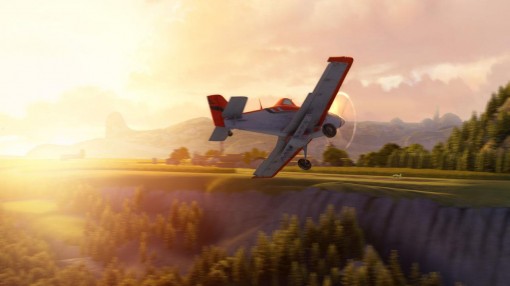 “Even for the landing gear on the aircraft we had to research, take pictures, break down the blueprints of the design of different aircraft to see exactly how these shocks could compress, and convey that realistically, and then support that emotionally when the characters were acting,” the director states.

But ensuring that none of the film’s characters, particularly the fighter jets, looked like a fleet from Rubber Hose Airlines was only the beginning. Hall also had to figure out how to fit a one-propeller crop duster and jets, as well as any number of other aircraft size comparisons, onto the screen at the same time.

“The wings always got in the way,” Hall says. “Any time you needed to get a two-shot or a three-shot of characters conversing, it was very difficult. On top of that, where [in Cars] you have a windshield to get across the acting of the eyes, we had windscreens, which are much smaller and convex in shape. It was very difficult to get that to work.” 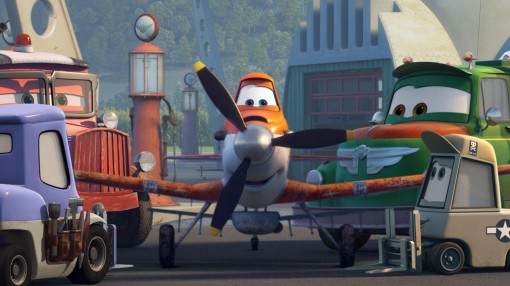 Even though Hall is the son of a Navy pilot who came to the project with an interest and background in aviation, it became clear that outside help was needed.

“Every time we were working on the testing it looked fake,” Hall says. “It looked like a toy hanging from strings.” Planes‘ producer Traci Balthazor-Flynn was able to lure flight specialist and filmmaker Jason McKinley, the creator the History Channel aviation program Dogfights, on board. “Right off the bat, [McKinley] said, ‘Man, these planes are going way too fast, slow them down!'” Balthazor-Flynn recalls. “We actually built the world to scale so everything would be relative, and we figured out how fast the plane would fly realistically. Most often, the plane animation was set to realistic world miles or kilometers per hour.”

Pilot Sean Bautista was also brought in to help the animators create realistic flight patterns, a strategy that worked almost too well, according to Balthazor-Flynn. 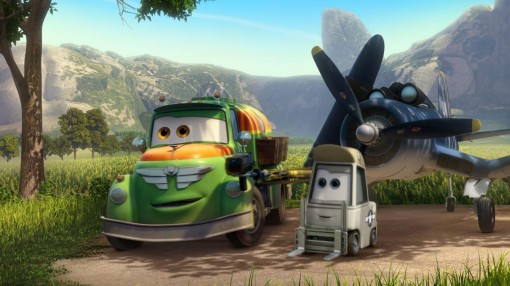 “There’s a common misconception that we might have used a flight simulator to create this movie,” she says, “but really, all of the flight was animated by hand. We did develop a simple pathing tool to help when the vehicles are on the ground, to make three-point turns a little easier for the animators, but it wasn’t in any way automated.”

Planes tells the story of an eager young country crop duster called Dusty, voiced by comic Dane Cook (who replaced original actor Jon Stewart), who refuses to believe what everyone tells him: that he’s not built to play in the big leagues of global racing. With a little help from his friends, a no-nonsense mechanic forklift named Dottie (Teri Hatcher), a dim-beamed fuel truck named Chug (Brad Garrett) and a crusty, grounded World War II Navy Corsair with a secret past called Skipper (Stacy Keach), Dusty makes it through the qualifying trials. (In one of the film’s hippest gags, Dusty gets his place when another finalist is disqualified after testing positive for fuel additive).

For the “Wings Around the Globe” race itself, he is the little plane who could, facing off with serious international competitors, including a passionate Mexican plane called El Chupacabra (Carlos Alazraqui), who wears a lucha libre mask; a self-sufficient French Canadian racer named Rochelle (Julia Louis-Dreyfus); entries from Britain and India, Bulldog and Ishani (John Cleese and Priyanka Chopra, respectively); and of course, the film’s antagonist, an arrogant, high-tech Top Gun named Ripslinger (Roger Craig Smith), who is already a three-time champion. 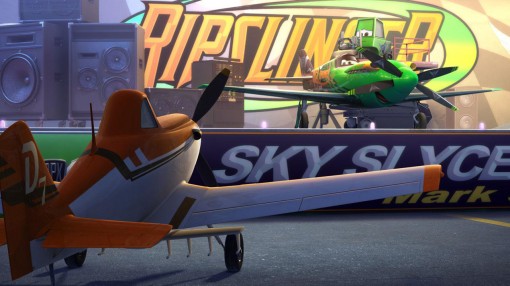 According to Balthazor-Flynn, the international aspect was a way of expanding the World of Cars (which has developed into a marketing sub-brand for Disney/Pixar) into a Wide, Wide World.

“It gave us the opportunity to explore so many areas around the world and do what we call ‘planeifying’ them, which is taking what you know and inserting the shapes of planes, and making it feel like it fits in the world,” she says. “Shapes are definitely where we had the most Easter eggs.”

Neither Hall nor Balthazor-Flynn will go into great detail about those hidden little goodies (whose sheer number point up the fact that the film was originally designed to be seen with a freeze-framer in hand), but Hall will point out directions. 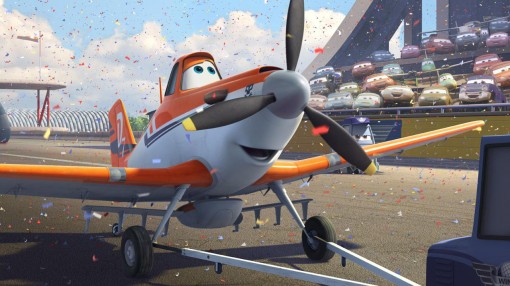 “We have a beautiful sequence in the movie where we see the Taj Mahal, and if you look closely, it’s been planeified,” he says. “There are all different kinds of cool things that are happening throughout our universe that maybe at first glance you don’t catch.”

One egg that won’t be seen, surprisingly so, given the cast of thousands of vehicles in the background, is the Pizza Planet Truck, Pixar’s version of a Hitchcock cameo.

“Here’s the thing,” Hall laughs, “the Pizza Planet Truck is a Pixar icon, and we’re Disney, so we didn’t want to step on their toes on that one.” 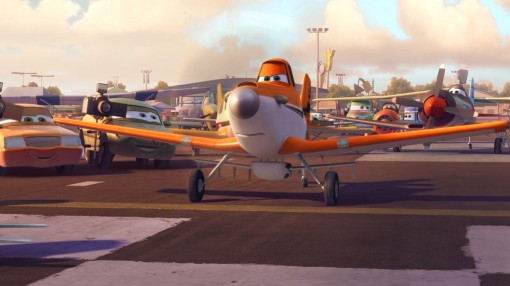 There is, however, a cameo part for Pixar’s official good luck charm, John Ratzenberger, which, Hall says, was developed spontaneously after Ratzenberger showed up for a meeting with Lasseter at the DisneyToons Studios in Glendale, California.

A sequel to Planes, titled Planes: Fire and Rescue, is already in production for a 2014 release, though the studio is downplaying the rumors that Planes is the first of a new trilogy.

“We’ll have to wait and see how things go,” Balthazor-Flynn says. 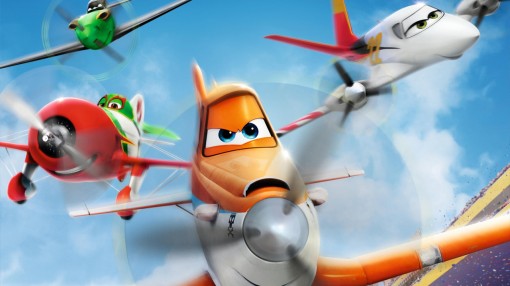 For inquiring minds, however, there is one puzzling question about the world seen in Planes: if the hero is a crop duster, but there are no humans in this world, who are the crops being grown for?

“They’re growing corn,” Hall quickly explains, “and corn is ethanol, so the ethanol is the gas they use.”

Plane-ly, they thought of everything.

Disney’s Planes will take off in theaters nationwide on August 9.