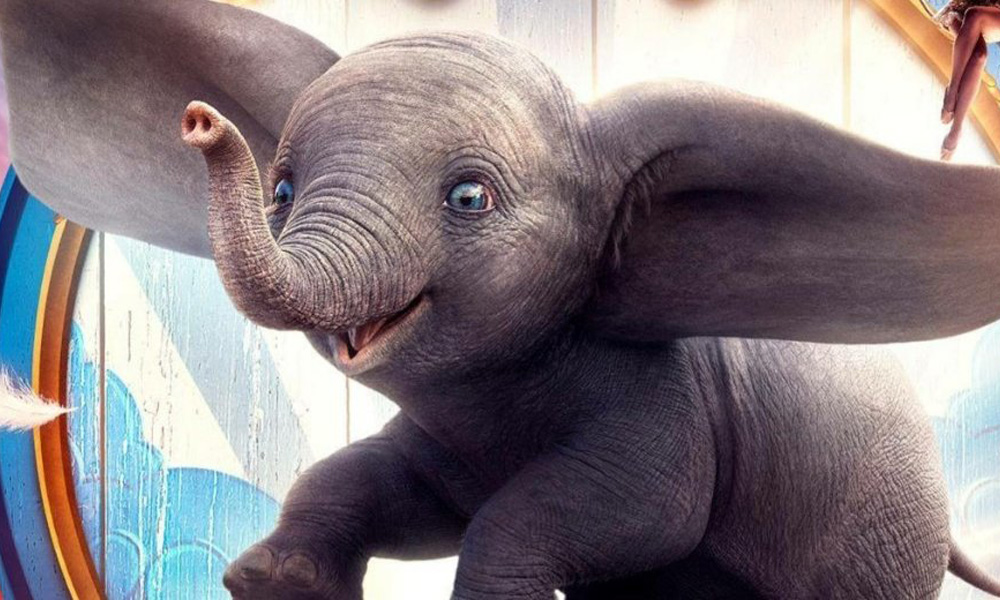 This Friday marks the release of Tim Burton’s live-action version of Disney’s much-loved 1941 animated classic Dumbo. The film did very well in Thursday night previews in the U.S., scoring an impressive $2.6 million. The studio is anticipating a $50 plus million debut while other sources are suggesting a debut in the $60-65 million range.

Despite showcasing the usual stunning Burtonesque visuals, the new version of the flying-elephant tale is getting slammed by critics for its bloated storyline, over-the-top, cartoonish acting (courtesy of Danny DeVito and Michael Keaton), and hard-to-take scenes of animals, and the film’s new young characters going through a lot of horrible pain and misery for a few moments of happiness at the end of the movie. The two-hour movie does feature such stunning visual effects courtesy of vfx supervisor Richard Stammers and production vfx supervisor Hal Couzens, and the teams at MPC (Moving Picture Company), Framestore, RISE, Rising Sun Pictures and Rodeo FX.

The film currently has a low score of 52% on Rottentomatoes.com, which raises the question, ‘Do we really need these live-action versions of beloved animated Disney classics?” (Aladdin, The Lion King, Malificent 2, Mulan, Snow White, Pinocchio, Lady and the Tramp, The Sword in the Stone, Cruella, Prince Charming are in the pipeline.)

Here is a quick sampler of what the major critics had to say about the new Dumbo:

“I was psyched for the teaming of Keaton and Burton, but the chemistry, sad to say, produces no magical brew. Something else nags at this movie: We no longer conceive of old-fashioned circuses and the schooling for animals to be props and comic attractions as harmless fun…Whether you view such projects as a flourish of digital legerdemain, or as a dead weight and an insult to Uncle Walt, is no consequence. What matters is that they rub the lamp and rack up the gold!”
– Anthony Lane, The New Yorker

“It’s astounding that Tim Burton and his colleagues could have created such a downer from a long-beloved source of delight.”
-Joe Morgenstern, Wall Street Journal

“I was expecting a surplus of cute close-ups, but Burton does surprisingly little to win us over. He’s never been big on treacle, but a bit more warmth in this chilly movie, which barely follows the outline of the 1941 original, would have gone a long way.”
-Peter Rainer, Christian Science Monitor

“That the plot involves having DeVito’s modest family-run circus being swallowed up by a mogul with his own theme park is almost too obvious a metaphor for the back half of Burton’s 35-year career.”
-Chris Klimek, NPR

“It has some undeniably magical moments, but how many of these there are depends on the eyes and age of the beholder.”
-Kenneth Turan, Los Angeles Times

“This live-action re-imagining of Disney’s 1941 animated classic may be the sweetest film Tim Burton has ever made. It’s also the safest.”
-Peter Travers, Rolling Stone

“The character of Dumbo is still touching, but the tale of entrapment and rescue that surrounds him is not. It’s arduous and forgettable, done in busy italicized strokes.”
-Owen Gleiberman, Variety

“Burton has merrily turned what could have been another remake into something genuinely different and surprising. What exactly it is will partly depend on your view toward Disney. So it’s worth noting that for all the tumult and fury, this can also feel a bit like a bittersweet origin story: 1919 was the same year that the teenage Walt returned from war and was hired by a commercial art shop where he met Ub Iwerks who helped create Mickey Mouse.”
-Manohla Dargis, The New York Times