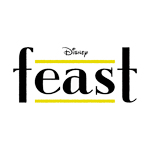 Walt Disney Animation has released new images from its next theatrical short, Feast, which is set to play in front of the Marvel comic adaptation Big Hero 6 starting November 7. Directed by Patrick Osborne and produced by fellow Paperman alum Kristina Reed, Feast is a dog’s-eye view of one man’s love life which is revealed bite by bite through the meals they share.

Osborne joined the studio in 2008 as an animator on Bolt and took place in Disney’s month-long Spark program, during which he produced the experimental short Pet — a hit with his fellow artists. He went on to work on 2010’s Tangled and was head of animation for the Oscar-winning short Paperman. Osborne had been tapped as co-head of animation for Big Hero 6 before his concept for Feast was greenlit.