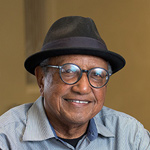 If you’re a knowledgeable fan of Disney animation — and animation in general — you probably already know who Floyd Norman is.

A Disney Legend, Norman was hired in 1956 as the first African-American at Disney, and worked on classics such as Sleeping Beauty, 101 Dalmatians and — alongside the man the studio is named for — was on the story team for The Jungle Book. He’s since worked all over in animation: He’s had his own production company, he worked for Hanna-Barbera, and then to Pixar to work on Toy Story 2 and Monsters, Inc., before Disney retired him on his 65th birthday.

Or, at least, they tried to.

At 81, Norman remains active in animation, art and Disney, with no plans to retire.

And it was this “never quit” attitude that interested filmmakers Michael Fiore and Erik Sharkey to make a documentary about Norman — titled Floyd Norman: An Animated Life — released Aug. 26 in theaters and via On Demand and Digital HD.

We caught up with Norman to talk about the movie, which includes several animated sequences based on storyboards by Norman himself — three of which we present here exclusively.

Animation Magazine: How did this documentary project about you get started?

Floyd Norman: It was just one of those quirky things where I was at the San Diego Comic-Con and friend of mine was the subject of a documentary, the famous illustrator Drew Struzan. And so I went over to congratulate Drew for his documentary and I met the filmmaker, Erik Sharkey, who was there and Erik said he had completed this film and was shopping for another project. And a friend of mine happened to say, well here’s your next project standing right here. And that’s how I met Erik and that’s how the whole thing started.

Animag: Were you at all concerned about letting them document your life and some of the personal parts of it as much as they did?

Norman: No. I’m a filmmaker myself, so this was something I was pretty much used to, having produced documentaries on my own. I recognized what would happen with my life and I basically trusted the filmmakers and put my life in their hands.

Animag: Did you think your career was important to animation history, being the first African-American animator at Disney?

Norman: Oh, no. No. Not at all. In fact, that’s even mentioned in the film. I gave no significance to the color of my skin when I came to Disney along with another group of artists. Nobody thought of themselves as a trail blazer. … We were all just artists looking for a job and a career at Disney.

Animag: You must have realized at some point that your story was an inspiration to other people wanting to work in animation. Was there a moment or time when you realized that this was happening?

Norman: I’ve always, throughout my career, visited schools and spoken to young kids who are looking to have a career in art — be it in motion pictures or in print. I’ve spoken with young people and if my life or career inspires them in any way, so much the better. It was never my intention to inspire but if they feel like my career has been notable, and I’ve set an example that they’d like to follow, well that’s just icing on the cake. But I never thought of myself as anything special. Keep in mind, there were hundreds of artists here at Disney. Literally hundreds. And so I didn’t think of myself as being any more special than anybody else. Maybe just because the way my life and career has gone, I’ve sort of had more longevity than others because I simply wouldn’t leave, I wouldn’t quit, so I’ve become more high profile in the sense that I’ve just never walked away where a lot of my colleagues have retired and moved on to other things.

Animag: What is it about animation that has held your interest and your passion for so long?

Norman: It’s a fascinating medium for telling stories. I became interested in stories as a little kid when I would listen to storytellers — men and women — who would come to our schools or social gatherings and they would put all us kids in a circle and tell us a story. And I found storytelling absolutely fascinating. I was always drawing pictures so I was an artist, so when this idea of art and motion pictures combined as a storytelling medium, animation was the perfect medium for myself, as an artist, as a storyteller, as someone who loves movies, all these thing came together. And I think the studio that was the perfect example of this is the Walt Disney Studio, where Walt Disney used art and artists to weave a compelling story. So it just seemed a natural to me by the time i reached middle school that my career was going to be at the Walt Disney studio.

Animag: You worked with Walt on The Jungle Book. What was it like working with him and what about the experience has stayed with you?

Norman: What I liked most about Walt Disney is that he was decisive. He knew what he wanted and he made that quite clear. He was the best boss I ever had, even though he was the most demanding boss I ever had. Walt expected things to be done right, he didn’t settle for anything less than the best. He was kind of a perfectionist and he was driven and I have no problem with that because if I’m working with someone who wants the best, I have no argument with that. So he was some people have called him difficult to work with. That was not my experience. I never found Walt Disney difficult; I found him demanding, but I don’t think demanding is necessarily difficult. He just knew what he wanted and insisted we give him what he wanted and luckily I was able to do just that. So it was a very good relationship. And I have no problems with the old man. We had a great time together.

Animag: What do you think is the enduring appeal of animation, why has it become so popular?

Norman: It seems to be a medium the public just embraces. We’ve often joked that animated films have a better chance at succeeding than live-action films. Audiences will turn out to see an animated film, even a film that’s not that good. … Now maybe a good deal of that audience is the family audience, because of kids – you need a movie to take the kids to see. So for years, Disney had that family market pretty much to itself. But with the advent of CGI and the digital production pipeline, it’s allowed other players to come into the scene and so more studios have joined in producing family-friendly entertainment and it’s proven to be pretty profitable. It’s been a medium that people enjoy and animation is probably more robust today than ever with more films being made. When I came into this business, you saw an animated film once every fie or seven years. Now you see seven films every year.

Animag: What Disney project that you’ve worked on are you most proud of.

Norman: You find things you love in every film, things that are special to you. But it’s really hard to choose a favorite. If I had to choose a couple of favorites, it would be The Jungle Book, simply because that was the one film where i got to work with Walt Disney, so The Jungle Book has got to be a favorite of mine. I think the second film would be Toy Story 2, because I felt that film had probably of all the films I’ve worked on a good solid story that I still look back with admiration today.

Animag: What do you hope people will take away from watching this film about your life story?

Norman: It’s interesting that the filmmakers chose to make my life story, to put my life on film. I don’t think my life is all that significant from many other lives. I think all of us lead interesting lives — some maybe more so than others. It wasn’t’ until the filmmakers started putting the film together that I realized looking back that I had some interesting times in my career. So maybe that makes the film interesting, some of the things I’ve done and seen and been a part of from the 1965 Watts Riot to the Civil-Rights Movement to just the way my career has gone up and down, in and out, in the motion picture industry. I launched my own production company and did that for a while. I did TV commercials for a while. I did feature films. I’ve bounced all over the place in my career. I don’t think it was that significant or all that different from what my colleagues were doing. If my life appears to be more colorful or more entertaining, so be it. But as you live your life, you’re not thinking about that as you’re going through it. It is just your life. It is just your career. And only looking back on it, I realize, yeah, I did some interesting things and overall it’s been a good life and a good career.

Animag: I assume you have no plans to retire?

Norman: None whatsoever. I just keep looking forward to more projects. And I think that’s the key to longevity, that’s the key to staying healthy. You have to have something to look forward to every day. If you get out of bed and you go and sit in a lawn chair or a rocking chair, I don’t think that’s the best way to live one’s life. I think what keeps you active and vital is you need stuff to do. You need things to fill your life and you need new challenges. You need challenges when you’re young, and you need challenges when you’re old. When those challenges are gone, I think that’s when you truly get old. So that’s why I just never stop working and have no plans to retire any time in the near future.

Animag: What are you working on now?

Norman: There’s always some project on my drawing board. At present time, it is a new book that I’m doing for Disney, a book that they want to keep the wraps on right now; they don’t want me to talk about it. So it will be a book that will be introduced next year in July of 2017. I can give you a hint that it concerns the gentleman who founded this company. I’m having a good time working on that and trying to meet a press date that’s coming up quickly, so there’s always something on my plate. And after that book is completed, there will be other things that will come my way. So I’ve always got things planned. Maybe a new motion picture, not a book. It doesn’t matter. As long as I’m doing something creative that’s what matters to me. 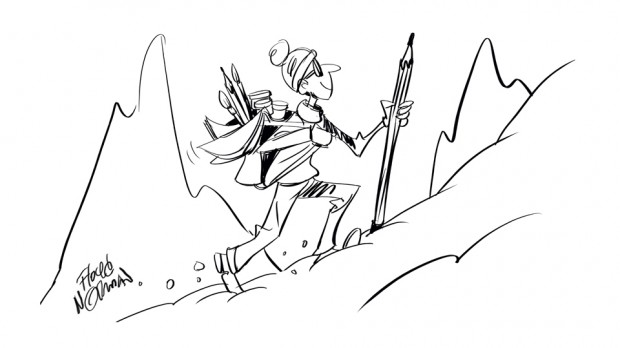 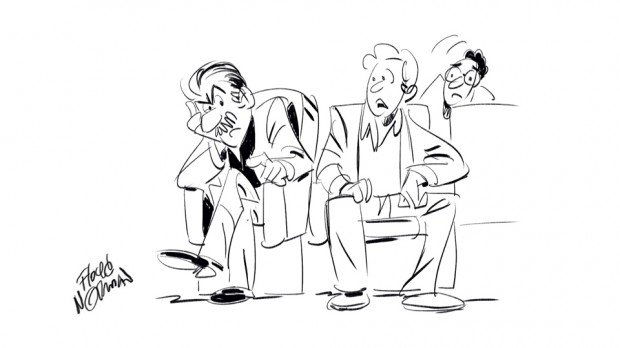 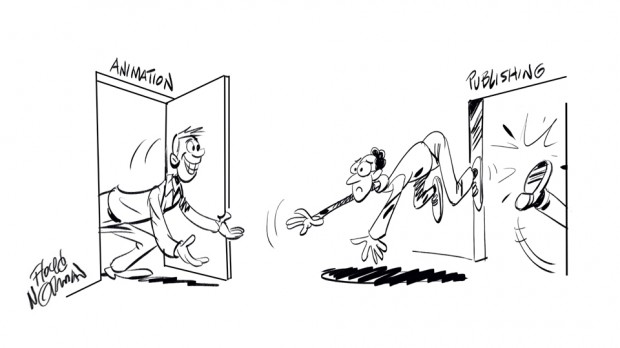 “Kicked out of Disney” 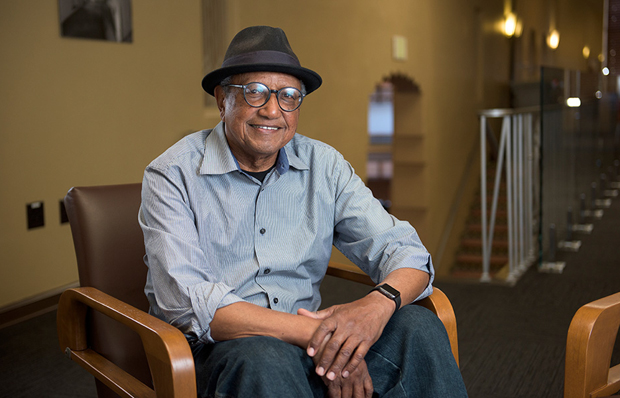