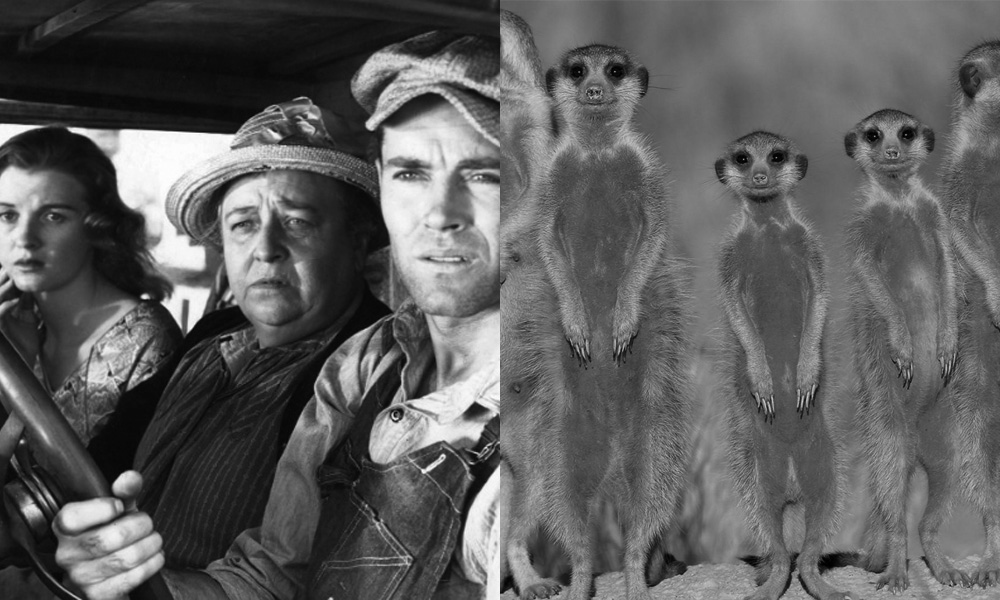 The Grapes of Wrath: Meerkats United

Disney has announced that it is developing a new string of hand-painted 2D feature adaptations based on some of the Oscar-winning Fox titles it recently acquired as part of the acquisition of the studio. Among the much-anticipated 2D animated movies in development at the Mouse House are beloved classics such as All About Eve, Gentleman’s Agreement, An Affair to Remember, The Day the Earth Stood Still, The Grapes of Wrath, The Prime of Miss Jean Brodie, Razor’s Edge and Hush, Hush, Sweet Charlotte.

“We wanted to offer our audience a complete new experience at the movies,” says Apple Fatwa Jr., the newly promoted VP of DisFox-Classics-Toons-Plus division at the studio. “We think that this new strategy allows us to go way, way, way outside the box and deliver an unexpected shift of paradigm beyond our pleasure-box ecosystem.”

According to the newly hired development VP, Ezekiel Vanderstamp Perchance, audiences can expect new family-friendly plot changes to the original classics, for example All About Eve: Children of the Milky Way is set in a multi-ethnic Los Angeles fifth-grade class and comes with deeply effective messages about self-acceptance and welcoming other alien life forms in the galaxy.

“We loved our writers’ new take on The Grapes of Wrath: Meerkats United for example, which really addresses all the issues we are dealing with in 2019, such as global warming, the Balkanization of Europe, and noxious brew of nationalism and authoritarianism all over the world, as seen through the eyes of a family of meerkats trying to get by in the Kalahari desert.”

The studio hopes this new strategy will prepare it to really address Netflix’s 2019 strategy of delivering 5,000 new animated movies and series each week through 2023 or the end of civilization, whichever happens first.

We hope you have a wonderful April Fool’s Day.