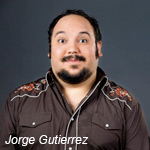 Guillermo del Toro will produce a new CG-animated feature, directed by Jorge Gutierrez, the creator of Nickelodeon’s series El Tigre: The Adventures of Manny Rivera. The movie, which is called Day of the Dead, will be produced by Aaron Berger and Carina Schulze of Chatrone Inc. at Dallas studio Reel FX. The movie will be ready for delivery in the fall of 2012.

Described a a Romeo and Juliet story set against the colorful Mexican holiday Day of the Dead, the movie was penned by Gutierrez and Doug Langdale, whose long list of credits includes The Return of Jafar, Darkwing Duck, The X’s and Kung Fu Panda. It represents the first time in almost twenty years — since 1993’s Cronos — that del Toro has collaborated on a feature project set in Mexico.

“I have admired Jorge’s work for a long time,” say del Toro. “He has a unique aesthetic and sense of humor. Day of the Dead offers a perfect opportunity for his sensibilities to shine. This is a colorful, vibrant, vital fable that utilizes the animation medium in an incredible way. The object of the tale is not only to talk about life but to dazzle us – jolt us- into living to the fullest. To join Reel FX, Cary Granat and Jorge in this adventure is a privilege and a joy.”

In addition to Day of the Dead, Reel FX has secured and is actively developing multiple CG-animated and effects-driven, live-action projects. Projects underway include an animated feature adaptation of the Dark Horse graphic novel, Beasts of Burden, produced by Andrew Adamson (Shrek) and Aron Warner; and Turkeys, the studio’s CG-animated comedy directed by Jimmy Hayward (Horton Hears a Who!) Reel FX also produced I Tawt I Taw a Puddy Tat, and the other recent 3-D CG-animated Looney Tunes shorts, in conjunction with Warner Bros. Animation.