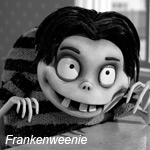 Director Tim Burton pays homages to his favorite monster movies and his childhood pet in the charming stop-motion gem Frankenweenie.

“If you’re lucky enough to have a pet that you love, it connects right to your heart. I was lucky enough to have a special pet that I had that kind of relationship with,” says Burton, who used his experiences with having — and losing — his beloved pup to create the story for his new stop-motion animated feature Frankenweenie, in theaters Oct. 5 from Disney.

Remaking and expanding upon Burton’s live-action 1984 short film of the same name, Frankenweenie tells the story of young Victor Frankenstein and his dog, Sparky. When Sparky’s hit by a car, a crushed Victor finds a way to revive him — with the secret of his success leading to some, shall we say, monstrous encounters. 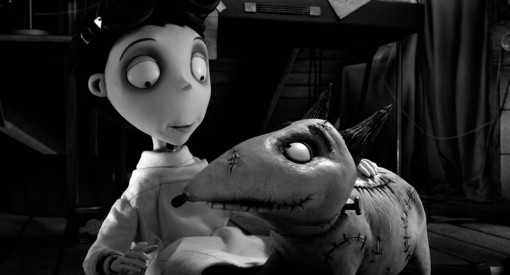 The mixture of such a personal emotion as the loss of a pet with the thrills of classic horror movies was obvious to Burton, director of such live-action smashes as Beetlejuice, Batman, Charlie and the Chocolate Factory and Alice in Wonderland.

“I always found movies like Frankenstein quite emotional, so it seemed like a fairly natural connection to combine the two,” he tells us.

This isn’t the first time Burton put this story on film. His first released film was a live-action short version released by Disney in 1984 that he credits with helping him get started as a live-action filmmaker. 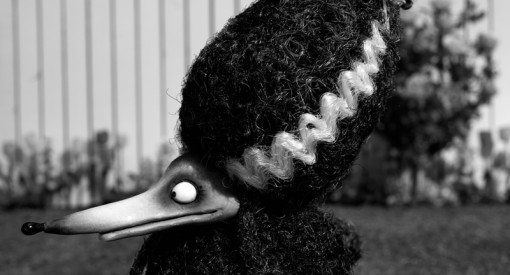 “I was grateful that the short was live-action because, if it had been animation, I probably wouldn’t have gotten into live-action.  It was a very lucky break, in a way,” he says.

Having come back around to animation by producing The Nightmare Before Christmas, James and the Giant Peach and directing Corpse Bride, Burton says animation is the right way to do the story 28 years later.

“I think there are enough new elements, and the stop-motion medium is a different medium,” he says. “It didn’t feel like I was treading over old territory.  It was a way to explore it in a different way.” 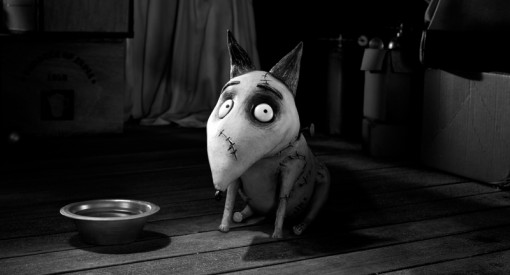 Expanding the original 30-minute short to feature length allowed Burton and screenwriter John August to explore in more depth the lives of his characters and their environment, adding in extra characters and elements that celebrate the horror and monster films Burton loved as a child.

“The heart of the story is the same,” Burton says. “It gets to explore kids’ politics and the way kids are with each other, and weird teachers and things. For me, it didn’t feel like it was a padding thing or a stretching thing. It felt quite natural.” 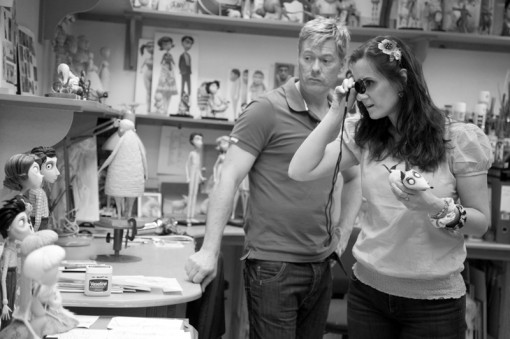 “The kids in the movie were inspired by the ones I went to school with,” Burton says. “There are personal things in there that always meant something to me, but that’s not necessary to watching the film.”

Burton also went after a look that would convey the handmade nature of the art form, using a smaller crew and allowing the charm of minor imperfections to seep in.

“We wanted to show the stop-motion,” Burton says. “When we did Corpse Bride, the puppets were so good that a lot of people thought it was computer animation. So, we just went back and did it a little bit low-tech, so that you really feel the stop-motion animation. When you see the details and everything, it’s beautiful. It’s its own art form.” 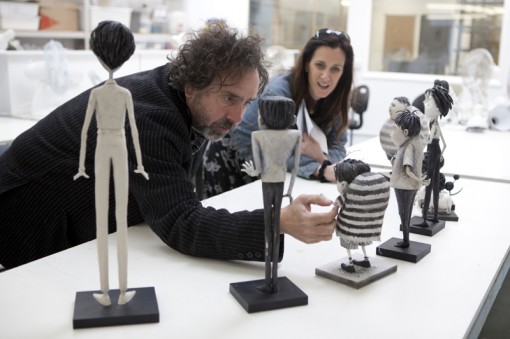 Producer Allison Abbate says it was fun to develop the look of the movie with Burton because it was such a personal story for him. “Developing the story, the look of the environments and the puppets all seemed so very specific to what was in his mind’s eye and his recollection and his imagination,” she says.

The crew worked directly from Burton’s sketches for the characters to build the puppets, a process that was a real challenge, Abbate says. 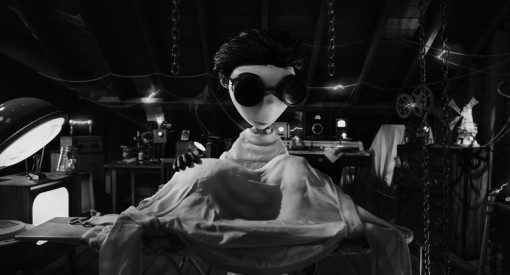 “You have to really interpret and figure out what it looks like from the back and the side, and how it stands up. In doing that, there was a lot of back and forth with him, directly,” she says.

The film’s Oscar-winning executive producer Don Hahn says Burton’s background in animation — he graduated from the same character animation CalArts class as Brad Bird, John Lasseter and Henry Selick — made him an easy director for the crew to work with.

“He has a vocabulary that the crew can relate to, and his notes are specific,” says Hahn. 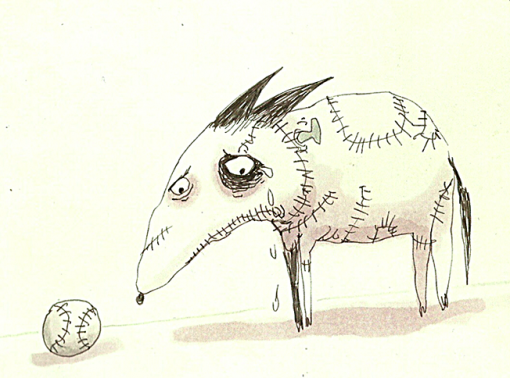 Abbate says the animation crew was as passionate about the project as Burton.

“You can see how far it’s come from The Nightmare Before Christmas until now,” she says. “The people that make the costumes love to make costumes. The idea of making a costume of this size, and having it work and move, and the puppet can move around, technologically, you have to be really smart and really creative. It’s a neat mix of that, for the artists.”

Hahn, who produced such 2D animated classics for Disney as Beauty and the Beast and The Lion King, agrees. 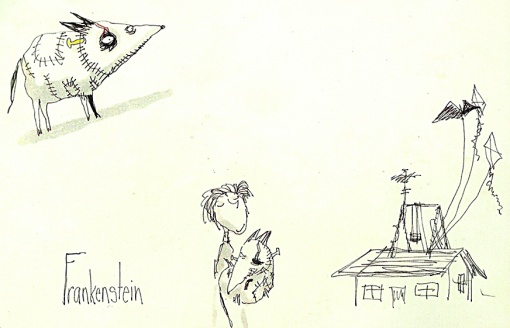 “There’s something very handmade about being able to touch and feel the puppet, and being able to create this life out of this inanimate object, more so than with pencil and paper or a computer. You can actually touch it and feel it, and that’s really satisfying for the animators and the crew,” he says.

Similarly, Burton reveled in shooting the film in black-and-white.

“The black and white draws out textures more. It makes it feel a bit more emotional, and it makes you feel like you’re there. It does a strange thing that’s hard to put into words, but it definitely affects the way you watch it.” 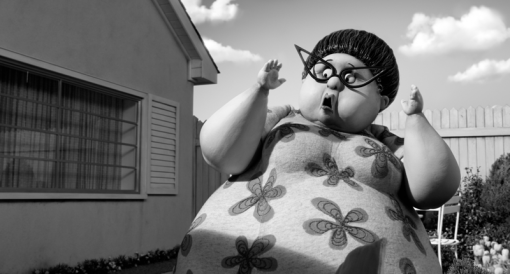 Many viewers will be watching the film through 3D glasses — with some of them seeing it on an IMAX screen. For Burton, the unusual combination of stop-motion animation, black-and-white photography and 3D offered an unusual challenge, especially since they had to do a test to determine if 3D would even work without color. Burton and the producers decided in advance of shooting to convert the film to 3D.

“There’s a lot of talk about 3D being too dark and too muddy. This was an opportunity to do it with black and white, and try to keep it crisp and keep the shadows dark,” he says.

The combination is effective, even for younger viewers, says Abbate. 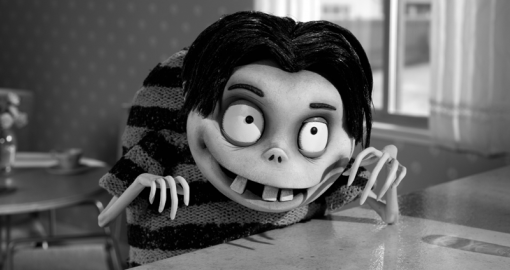 “We’ve had little kids come in and see it and, for them, it’s just a cool-looking movie, especially if they haven’t seen a lot of old movies. They’re like, ‘Sweet! How’d you do that?’” she says.

Though Burton’s next project is likely live-action, the director says he still loves animation and expects to return to the medium.

“It’s a technique that still basically is an animator moving a puppet, at 24 fps,” he says. “As much as you can do anything with technology, there is just something about going back to the simplicity of that and the excitement of seeing somebody move it, and then you see it come to life. It’s just very magical.” 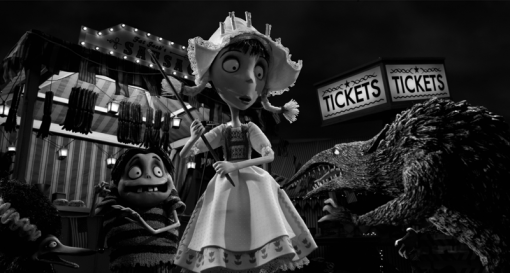