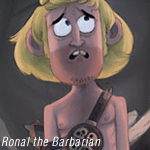 The Denmark-based makers of the upcoming 3D animated feature Ronal the Barbarian have presold the film to more than 15 countries, Variety reports.

Due for international release in October following a Sept. 22 bow in Denmark , Ronal is aimed at the 15-25 market and follows a barbarian with low self esteem who has to save his tribe from an evil lord.

Here’s a look at the teaser trailer for the movie:

Ronal the Barbarian is directed by Thorbjorn Christoffersen, Kresten Vestbjerg Andersen and Philip Einstein Lipski. It’s the first film for Denmark’s Einstein Film, which was established in 2009 by the three directors and producer Trine Heidergaard. The studio is coproduced by commercial broadcaster TV 2/Danmark and supported by the Danish Film Institute. The film has an estimated budget of $3.5 million and was featured at this year’s Cartoon Movie.