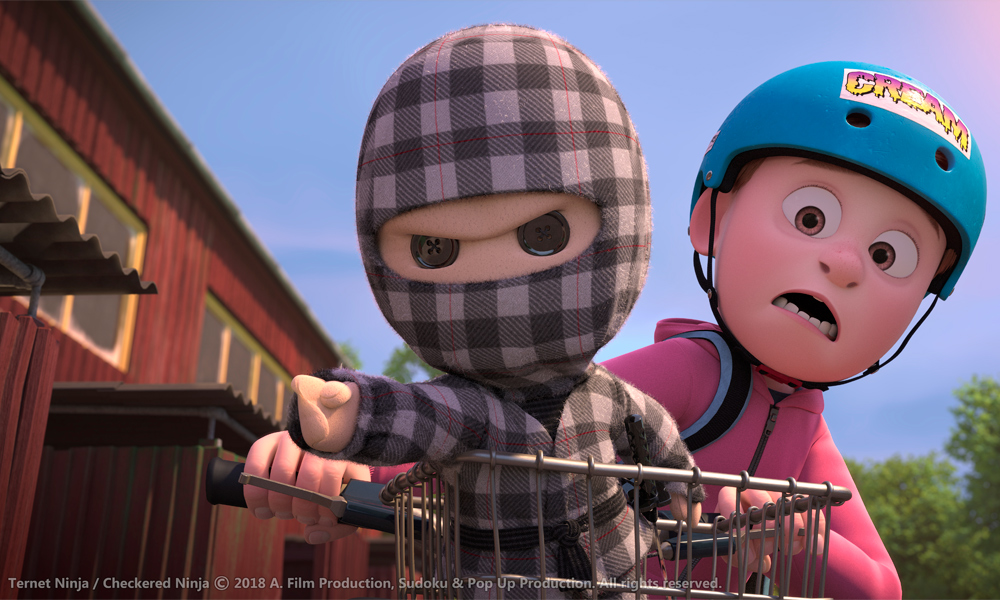 About 15 years ago, Danish studio A.Film and popular comic Anders Matthesen joined forces to produce the hilarious and raunchy animated movie Terkel in Trouble. Now, the team behind that blockbuster hit are back with a new animated movie that has already become Denmark’s most popular animated movie of all time. The film, which is called Checkered Ninja, is directed by Matthesen and Thorbjørn Christoffersen (Ronal the Barbarian) and produced by Cemille Matthesen, Trine Heidegaard and Anders Mastrup. Based on a bestselling novel written by Matthesen himself, it follows the misadventures of a bullied young boy named Aske whose life changes drastically after his uncle brings him a vengeful, magical ninja doll from Thailand.

While the production of the movie only took about a year and a half, Matthesen tells us that he had been living with the idea of the Checkered Ninja character for a long time. “I used to draw this ninja character in my notebooks, on birthday cards, for more than a decade,” says the comic. “So I decided to really dig deep and figure out the story behind the character, so I wrote this children’s book with the character, and the book became an award-winning bestseller in Denmark. So, I went back to the same studio and animation team that I made Terkel in Trouble with, and we based a script and movie on the character.”

As Matthesen is an in-demand actor and touring comedian, he actually did a lot of directing using taped videos and phone instructions, and animation director Christoffersen handled the daily operations of the project at the Copenhagen studio. “We had about 11 animators, plus a couple of modelers, an art director, four storyboard artists, an editor and a couple of previz artists and a few production artists on the team,” says Christofferson. “Overall, I would say we had about 30 people. I also did the 2D character designs, quite a bit of the storyboards, some previz and the final camera animation.”

Produced at A.Film in Copenhagen, the CG animated movie used 3ds Max for modeling, Maya for additional modeling and animation, V-Ray for rendering and Nuke for compositing. “Of course, we were able to keep the budget low because we had a small team, but I actually enjoy working with a small team,” says Christoffersen. “Everybody gets to know the story really well, and there’s a sense of pride and ownership among the animators because we all invest so much of our time and skills on a single project together.”

When asked about the general state of animation in Denmark, Christoffersen says, “It’s quite good. We have a lot of great talent, and we’re good at making nice stuff with a small budget. That’s something that we’re forced to do in order to survive. Most countries in Europe have favorable tax cuts for film and animation. But for some reason, we don’t have that in Denmark (yet!). That makes it hard for us to attract international projects. So we need to compete in other areas — like being really skillful at making good-looking animation with smaller budgets.”

Matthesen says he is proud of the project because it’s funny, but it doesn’t talk down to the audience. “We have a high level of comedy, and we deal with important moral issues, but we also don’t care about being politically correct. For example, there’s a murder in the beginning of the movie, and people have a glass of wine at the dinner table. You can’t show that in Sweden, but we can do things like that in Denmark, so we took advantage of the freedom as long as we still have it!”

Christoffersen says he was really drawn to the character of the main hero of the movie, Aske. “I can totally relate to him,” he says. “I was very much like him, a little shy and not really brave. He is thrown into a world of talking ninja dolls and his world is turned upside down. That eventually forces him to grow up. A lot of children’s films have this ‘diamond in the rough’ feeling, where the child grows up to be some kind of superhero with special abilities or gifts. That’s not the case with Aske — he just grows up! He also learns that you don’t have to be special or extraordinary to do the right thing or be a hero. I really like that message.”

Both directors are thrilled about how Danish audiences have embraced the movie. “I am very pleased with the film’s animation,” says Matthesen. “I made Terkel in Trouble with the same team, and that film had a huge following. I am also well known as a comedian in Denmark, so my fan base was happy to see the movie. A lot of people here grew up with Terkel in Trouble, so they were excited to see this movie. People have been asking me to do a sequel to that movie, and I’ve always said no. But we actually have some cameos of the Terkel characters (who are now all grown up) at a birthday scene in Checkered Ninja. Fans saw that as a special treat.”

Christoffersen chimes in. “People in general were very excited to see the movie, because Anders is an awesome comedian with a huge fanbase,” says the director. “Fans have been waiting for a long time for his follow-up to Terkel in Trouble. That, along with the great reviews and positive word of mouth, helped sell a lot of tickets. However, I didn’t expect it to break any records, so I was quite surprised and really happy about it.”

“Even the film’s soundtrack is very popular on Spotify and iTunes,” adds the comic, who also wrote the music for the project. “It looks like we have a big hit on our hands and it’s just crazy.”

Checkered Ninja is produced by A.Film, Pop Up Productions and Sudoku ApS. Learn more at afilm.com and www.levelk.dk/films/checkered-ninja.

“We have a high level of comedy, and we deal with important moral issues, but we also don’t care about being politically correct. For example, there’s a murder in the beginning of the movie, and people have a glass of wine at the dinner table!”