Fox Spirits and Demons: China’s Tech Giants Splash Out in Cartoon Arms Race
Reuters looks into the ever growing tidal wave of local toon production which is posed to compete with Japan’s well established industry. Technology firms in China are racing to develop or buy locally created characters in a market expected to reach a 216 billion yuan ($33.2 billion) value by 2020.

@warrenellis: ‘Castlevania’ S2 Coming This Year
Writer Warren Ellis tweeted that the eight-episode second season of the Capcom-inspired Netflix hit will come out later in 2018. He had previously told the Twitterverse S2 was launching this summer but, as he points out, “these things are decided by people other than me.” Frederator Studios is producing again with animation by Powerhouse Animation in Texas.

Hulu Strikes New Licensing Agreement with Viacom
Hundreds of episodes of popular live-action and animated programming from the Viacom library is now available for streaming — Hulu’s deal includes exclusive rights to the full MTV Daria series. Also returning to the platform are kids’ hits Alvinnnn!!! And the Chipmunks, Kung Fu Panda and Penguins of Madagascar.

Boom in TV Animation Turns Up the Volume on Voice Talent
Voice stars Maile Flanagan (Naruto), Bobby Moynihan (DuckTales), Alyson Stoner (Phineas and Ferb), Hank Azaria (The Simpsons) and more weigh in on the unique challenges and rewards of voice acting for animation and games.

Eat All the Food from ‘Spirited Away’ in This Taiwanese Town
The picturesque town of Jiufen, which inspired the enchanted bath resort in Miyazaki’s movie, is a food lover’s paradise. Just be sure to pace yourself so you don’t get turned into an actual pig.

WATCH: BIAF Trailer “White Rabbits”
The official spot for the 20th Bucheon Int’l Animation Festival was created by Sunao Katabuchi, director of In This Corner of the World (2016) which won the feature film Grand Prize at the last edition and continues to screen in Japanese theaters more than 580 days since its release — a live-action TV adaptation is launching this summer. Katabuchi transliterated the little white rabbits seen in one of the feature’s key scenes for this new short:

“When I make animations, I always think that we, the screenwriters, can only ‘create the brightness and darkness of the screen, and coat them with sounds.’ That’s all…It is inside the mind of audience where this screen is; it is then completed into an actual ‘film’. To express my artistic view into a visible figure, I drew a character that jumps out from the completed screen, and walks into someone’s mind.” 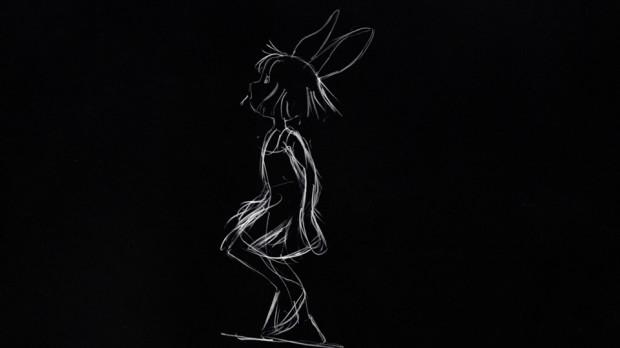