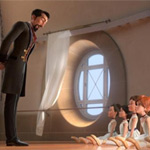 VIDEO: ‘Leap!’ New Online Dance Trailer
Are you ready to take the leap? New spot features Carly Rae Jepsen’s hit song “Cut to the Feeling” from the film’s soundtrack. The Weinstein Co. is opening the family comedy feature in theaters nationwide on August 30.

The Best Video Games of 2017 So Far
The Guardian gives top marks to David OReilly’s innovative Everything, the breathtaking The Legend of Zelda: Breath of the Wild and brilliant indie Night in the Woods, as well as just plain fun Nintendo titles and addictive RPGs.

VIDEO: Classic ‘Pokémon’ Episodes Are Now Available in HD!
Relive Ash Ketchum’s Indigo League adventures as the original series is now available for purchase in Digital HD through iTunes, Google Play and Amazon! The first season originally aired in Japan in 1997 and in the US in 1998, guaranteeing an entire generation would remember every word to the theme song forever.