VIDEO: ‘Star Wars Rebels’ episode “Warhead” Premieres Jan. 14 on Disney XD
Tune in this Saturday at 8:30 p.m. to watch Zeb and Chopper bring a damaged droid from the Atollon wilderness back to base, only to discover it’s a new Imperial probe programmed for espionage — and destruction! And check out the new Rebels Recon recap of last week’s episode.

VIDEO: New TV Spot for ‘Beauty and the Beast’
Emma Watson sings Belle’s iconic “I Want” song and we get another look at Beast and his enchanted CG housewares in the latest teaser for Disney’s live-action remake.

New Animated ‘Spider-Man’ Series Reveals Summer Premiere with First Teaser
Ultimate Spider-Man may have closed out its four-season run on Disney XD, but it is merely stepping aside for a new web-slingin’ toon: Marvel Spider-Man.

Why This Is the Year the Academy Should Consider Animated Films for Best Picture
Guest columnist Daniel Smith-Rowsey breaks it down for AwardsDaily.com. Hear, hear! 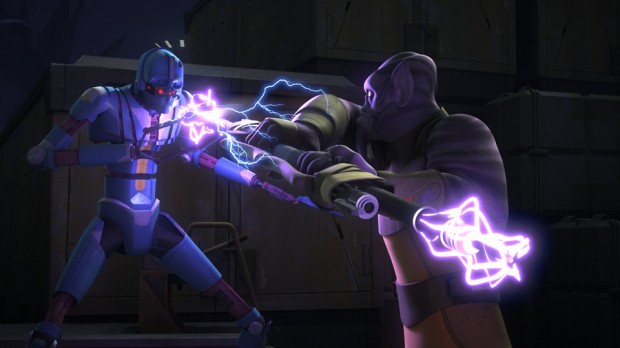