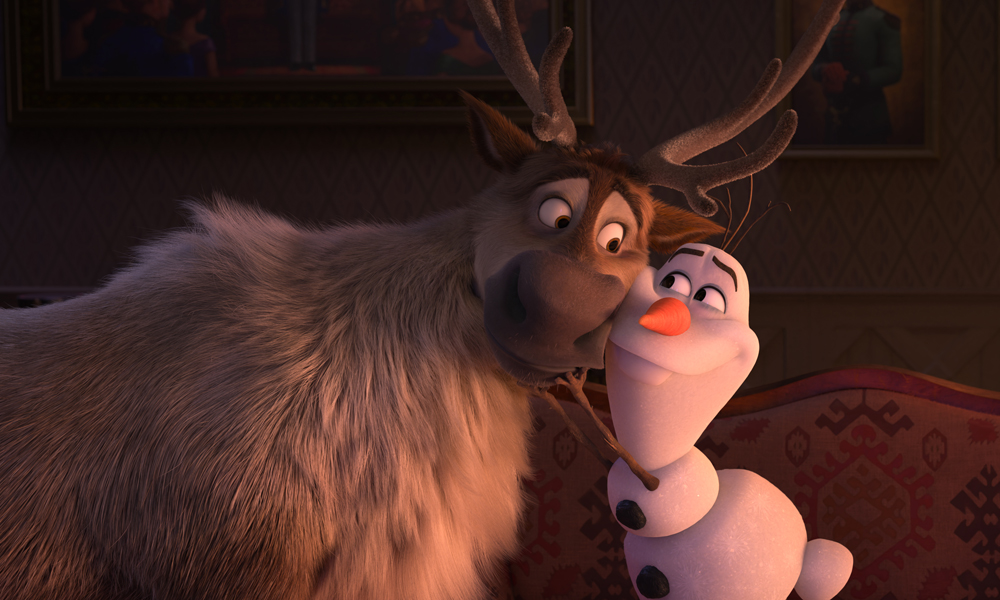 “You’re not just fans, you’re family,” Horn told the packed room. “It’s because of you that we keep working so hard to make great movies, and we love D23 Expo because it’s where we can share them with you first.”

Pete Docter guided the audience through Pixar’s upcoming originals, beginning with next summer’s release, Soul, which he directs. The film journeys from the streets of New York City to the never-before-seen cosmic realms and “The You Seminar,” the fantastical place where we all discover our unique personalities. Producer Dana Murray, co-director/writer Kemp Powers and writer Mike Jones joined Docter on stage to set up the film for the audience and share a sneak peek. The team revealed members of the voice cast who joined them on stage, including Ahmir Questlove Thompson, Phylicia Rashad, Daveed Diggs, Tina Fey and Jamie Foxx.

Foxx lends his voice to Joe Gardner, a middle-school band teacher whose true passion is playing jazz. Fey plays 22, a soul-in-training who has an unexpected encounter with Joe when he accidentally finds his way to the “You Seminar.” Together, the two are going to find a way to get Joe back to Earth, making him think again about what it truly means to have soul. Globally renowned musician Jon Batiste will be writing original jazz music for the film, and Oscar winners Trent Reznor and Atticus Ross (The Social Network), from Nine Inch Nails, will compose an original score that will drift between the real and soul worlds. Soul opens in U.S. theaters on June 19, 2020.

Docter next introduced director Dan Scanlon and producer Kori Rae, who shared details and more than ten minutes of exclusive footage from Pixar’s upcoming feature film Onward. The movie, which opens in U.S. theaters on March 6, 2020, stars Tom Holland and Chris Pratt as two teenage elf brothers, Ian and Barley Lightfoot, who embark on an extraordinary quest to discover if there is still a little magic left in the world. Set in a modern fantasy world, Disney and Pixar’s Onward is inspired by Scanlon’s personal experiences with his brother. Holland, Pratt and Julia Louis-Dreyfus — who voices Mom in the movie — joined the filmmakers on stage — much to the delight of the audience, who all received an exclusive Onward poster.

Jennifer Lee presented an overview of Walt Disney Animation Studios’ next two features, beginning with the Thanksgiving 2020 fantasy-action-adventure, Raya and the Last Dragon. Directors Paul Briggs and Dean Wellins (Big Hero 6, Frozen), producer Osnat Shurer (Moana) and writer Adele Lim (Crazy Rich Asians) joined to set up the film, which introduces Raya, a lone warrior from the fantasy kingdom of Kumandra who teams up with a crew of misfits in her quest to find the Last Dragon and bring light and unity back to their world. The D23 Expo crowd was the first to get a look at the new film, viewing an exclusive three-minute piece. They also met two newly announced members of the voice cast: Awkwafina lends her voice to Sisu, the Last Dragon, who was left on Earth in case dark forces return to the world, and Cassie Steele voices the lead character, Raya. Exploring themes of community and hope, and inspired by the beautiful and diverse cultures of Southeast Asia, Raya and the Last Dragon opens in U.S. theaters on Nov. 25, 2020.

Lee, who directs Frozen 2 with Chris Buck, and wrote the screenplay, invited Buck to join her on stage as the Oscar®-winning duo revealed new details about the upcoming film, which opens in U.S. theaters on Nov. 22. Lee and Buck introduced two new cast members: Sterling K. Brown, who voices Lieutenant Destin Mattias, and Evan Rachel Wood, who voices Queen Iduna, Anna and Elsa’s mother. The crowd — who received an exclusive D23 Expo Frozen 2 poster — saw never-before-seen footage of the new characters, including a scene that featured Wood as Iduna singing to young Elsa and Anna.

The song, “All Is Found,” is one of seven all-new original songs by Oscar-winning songwriters Kristen Anderson-Lopez and Robert Lopez. The audience also saw a sequence that showcased Elsa’s yearning for answers about the past, culminating in another song, “Into the Unknown.” And a climactic performance of the song “Some Things Never Change” by Idina Menzel, Kristen Bell, Jonathan Groff and Josh Gad brought the audience to its feet, capping off the studio presentation in extraordinary style. 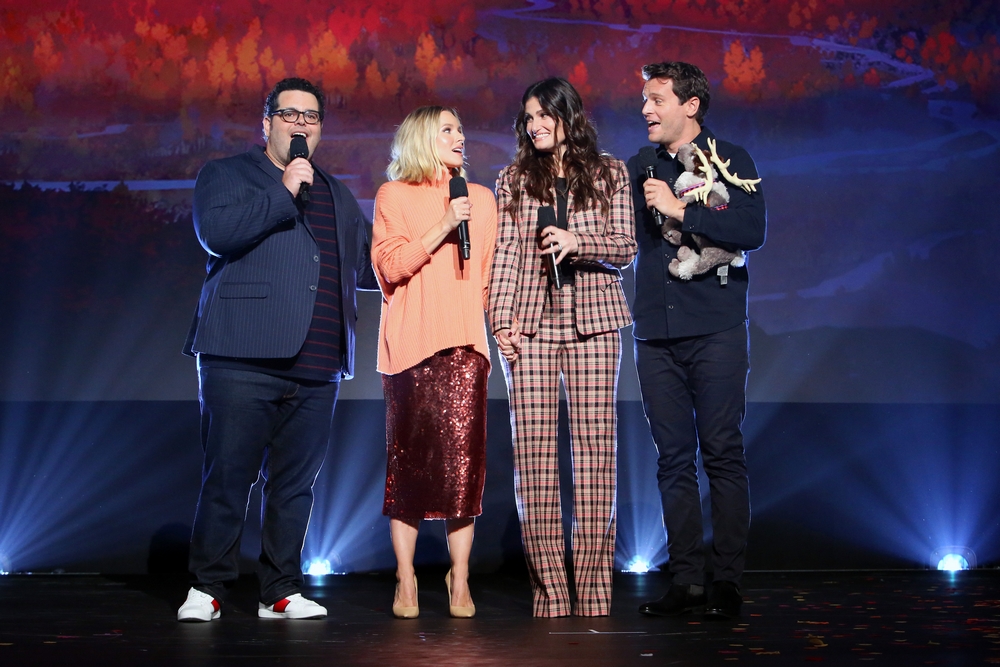 Lucasfilm’s Kennedy and Star Wars: The Rise of Skywalker director/writer/producer J.J. Abrams showcased the riveting conclusion to the Skywalker saga, introducing nine stars from the film (many making their first Expo appearance): Daisy Ridley, John Boyega, Oscar Isaac, Anthony Daniels, Naomi Ackie, Keri Russell, Joonas Suotamo, Kelly Marie Tran and Billy Dee Williams, plus special appearances from R2-D2, BB-8 and the new droid D-O. A brand-new poster was revealed — and gifted to the entire audience. And all were given a look back at the incredible legacy of Star Wars storytelling and treated to a sneak peek of The Rise of Skywalker, which opens in U.S. theaters on Dec. 20, 2019.

Marvel prez Feige kicked off his presentation with a surprise visit from Black Panther director and co-writer Ryan Coogler. Together, they revealed that Black Panther 2 (working title) will hit U.S. theaters on May 6, 2022.

Feige segued to next year’s The Eternals, inviting up cast members Richard Madden, who portrays the all-powerful Ikaris; Kumail Nanjiani, who plays cosmic-powered Kingo; Lauren Ridloff, who portrays the super-fast Makkari, the first deaf hero in the MCU; Brian Tyree Henry, who plays the intelligent inventor Phastos; Salma Hayek, who plays the wise and spiritual leader Ajak; Lia McHugh, who portrays the eternally young, old-soul Sprite; Don Lee, who plays the powerful Gilgamesh; and Angelina Jolie, who stars as the fierce warrior Thena. Feige revealed concept art images of each character, and announced three new cast members and their characters: Gemma Chan, who plays humankind-loving Sersi; Kit Harington, who was cast as non-Eternal Dane Whitman, and Barry Keoghan, who portrays aloof loner Druig, and was on hand for the event. Directed by Chloé Zhao, who helmed the critically acclaimed Sundance film The Rider, The Eternals opens in U.S. theaters on Nov. 6, 2020.

Feige concluded with director Cate Shortland’s Black Widow, the first film in Phase Four of the Marvel Cinematic Universe, which hits U.S. theaters on May 1, 2020. Feige shared a pre-recorded greeting featuring stars Scarlett Johansson, who reprises her role of Natasha Romanoff/Black Widow; David Harbour, who was cast as Alexei the Red Guardian; and Florence Pugh, who plays Yelena. The audience was also treated to an exclusive look at the upcoming film.

WDS Motion Picture’s Bailey took the audience through upcoming releases for the studio, including next summer’s Jungle Cruise, inspired by the classic theme-park attraction. Star Dwayne Johnson, who plays riverboat captain Frank Wolff, entered Hall D23 aboard an original Jungle Cruise boat, introducing a “trailer” that showed off his character — so much so, that co-star Emily Blunt, who portrays Dr. Lily Houghton, arrived via classic car to share with fans her own “trailer,” offering a different perspective — Bailey laughingly informed Johnson and Blunt that neither trailer was official. Directed by Jaume Collet-Serra, Disney’s Jungle Cruise hits U.S. theaters on July 24, 2020.

Bailey welcomed Angelina Jolie back to the stage to present exclusive footage and details about Maleficent: Mistress of Evil, the exciting follow-up to the hit 2014 film. Maleficent (Jolie) and her goddaughter Aurora (Elle Fanning) begin to question the complex family ties that bind them as they are pulled in different directions by impending nuptials, unexpected allies and new dark forces at play. Aurora’s imminent marriage to Prince Phillip is cause for celebration — however, Prince Phillip’s mother, Queen Ingrith (Michelle Pfeiffer), challenges Maleficent’s role as Aurora’s mother figure. Chiwetel Ejiofor stars as Connal, one of the leaders of the dark fey who becomes Maleficent’s ally. Ejiofor, Pfeiffer and Fanning were all welcomed to the stage by an enthusiastic audience. Directed by Joachim Rønning, who co-helmed 2017’s Pirates of the Caribbean: Dead Men Tell No Tales, Mistress of Evil arrives in U.S. theaters on Oct. 18, 2019.

Bailey next introduced acclaimed filmmaker Niki Caro, director of Mulan, the upcoming live-action reimagining of the 1998 classic animated film. Caro expressed to fans her passion for the project, sharing several minutes of footage from the epic adventure inspired by one of China’s fiercest warriors. In Disney’s Mulan, which opens in U.S. theaters on March 27, 2020, the Emperor of China issues a decree that one man per family must serve in the Imperial Army to defend the country from Northern invaders. So, the eldest daughter of an honored but ailing warrior masquerades as a man, transforming into a heroic warrior to ultimately earn her the respect of a grateful nation and a proud father.

Next up, Bailey shared details about Cruella, an all-new feature film starring Emma Stone and Emma Thompson. Stone, who plays the iconic “Cruella,” sent D23 Expo fans a greeting from the London-based set with help from a spotted, four-legged co-star. Fans also got a glimpse of an image of Stone in full costume with Cruella’s signature black-and-white hair. Director Craig Gillespie, who helmed I, Tonya and The Finest Hours, brings Cruella to the big screen on May 28, 2021, with a fresh, 1970s, punk-rock approach. 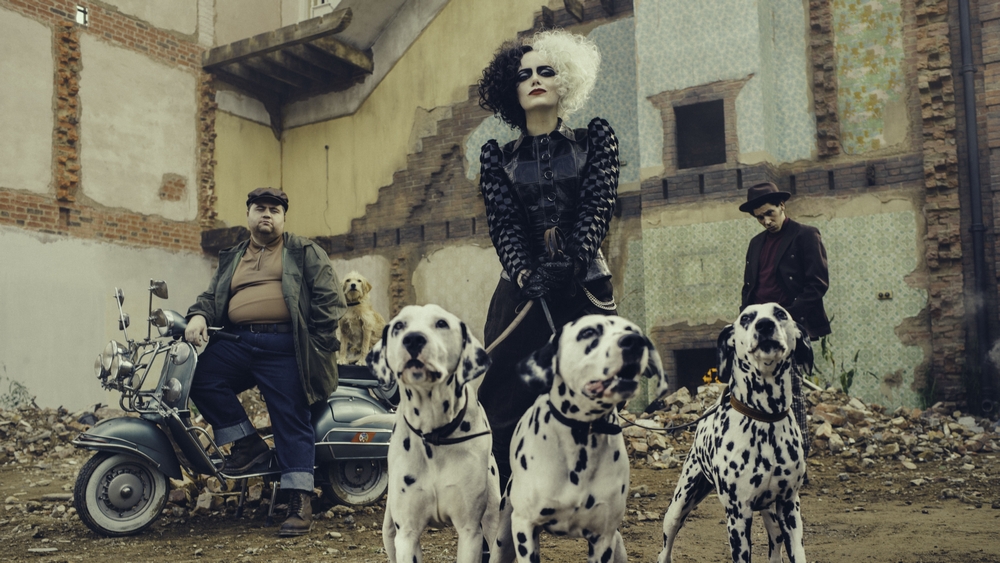