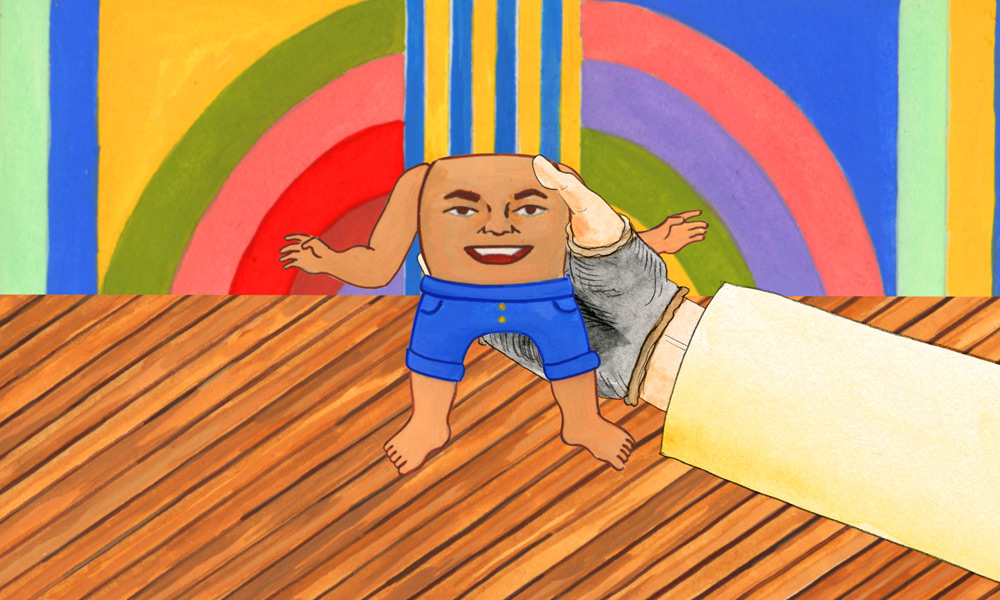 If you like your animated features bold, hallucinogenic and packed with beautiful cryptids, then you are going to love Cryptozoo, the second feature by Dash Shaw and his wife Jane Samborski, who also gave us the highly original 2016 pic My Entire High School Sinking Into the Sea. The new indie flick, which was made by the duo in their house in Richmond, Virginia with the aid of eight interns from a nearby college, is a beautiful, wildly imagined tale about a protected sanctuary for mythical creatures such as griffins, unicorns, manticores, chimeras and bakus (Japanese dream-eaters). 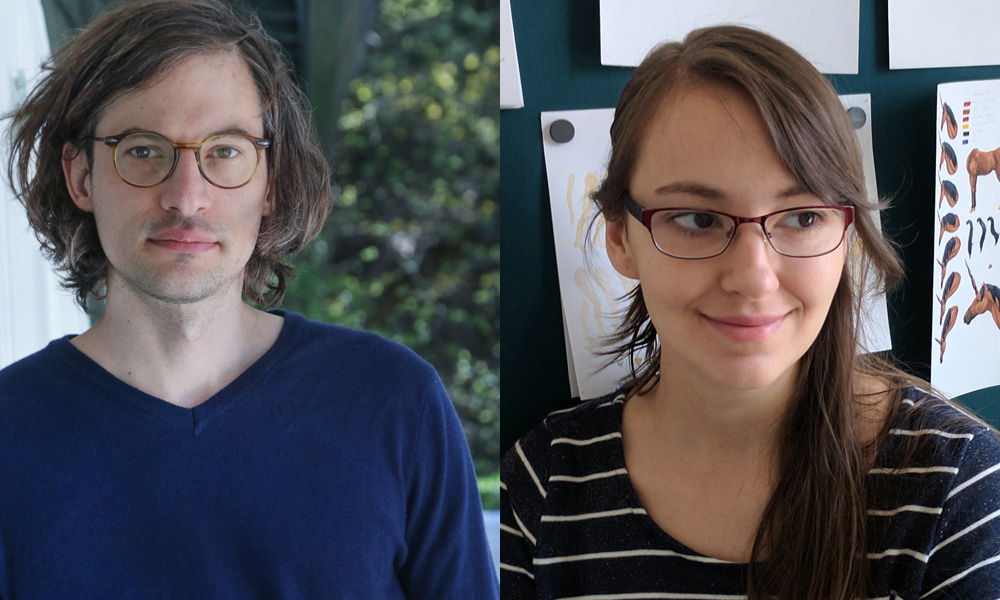 Shaw and Samborski began thinking about the idea for this movie about six years ago, just as they were wrapping their last. “The storyline was the result of a few things coming together,” recalls Shaw during a recent Zoom interview. “I was thinking about how drawing is our first and only way to see imaginary beings since they can’t be photographed,” he explains. [Animation pioneer] Winsor McCay had started an unfinished film called The Centaurs in 1921. Here is this great master of animation who had this idea of drawing as a way to see mythological creatures. His other work Gertie the Dinosaur and Little Nemo in Slumberland could also only be told through this medium.”

Another inspiration was Samborski’s all-female Dungeons & Dragons group! “I wanted to focus on something that Jane would enjoy since she ended up painting most of the cryptids in the movie, and that probably inspired the mostly female cast of the movie, and also the globetrotting nature of the project,” Shaw notes.

The filmmaker was also influenced by New York Public Library’s archives of newspapers from around the world chronicling the counterculture movement from the 1980s. “I had a fellowship at the library, and one of the fellows was researching the movement, so I looked at the weekly papers from places like Brazil and Chicago, and noticed that they all featured this optimism and had this art nouveau, quasi-fantasy-type drawing style. That style was somehow attached to the global counter-culture movement in the days before the internet.”

Shaw was also influenced by a New York Museum of Modern Art exhibit of 1960s and early ’70s art. “I was looking at this time period when Walt Disney died, and there were plans to make Epcot Center an actual city, but it became an amusement park instead,” he says. “I saw that period as a time where freedom of imagination was hemmed in and contained. I just felt like the right backdrop and period for the movie.” 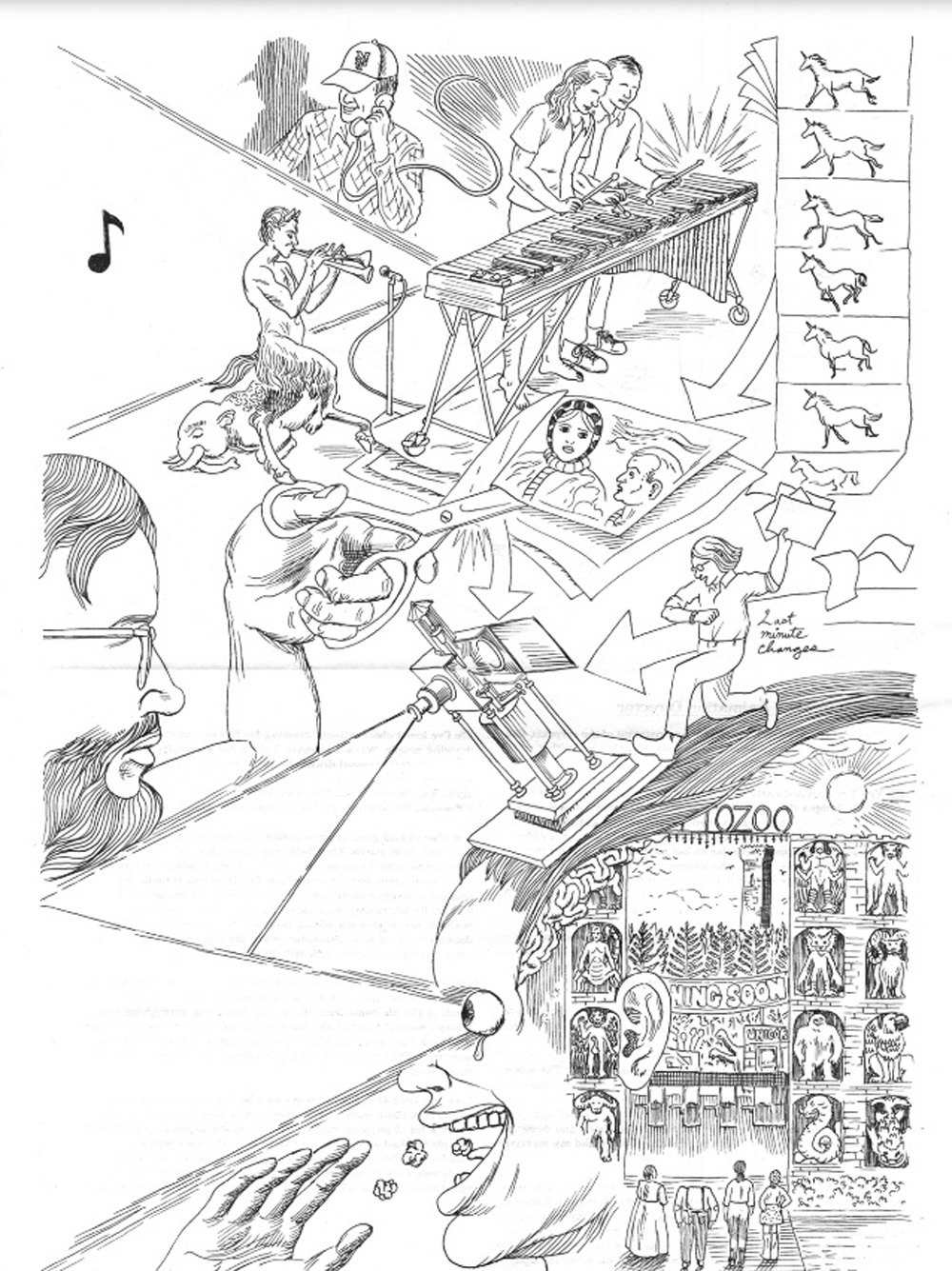 The director invited artists that he knew from the comic world to help draw the movie. “I tried to cast each scene knowing what each painter’s art looks like, just like you would cast an artist,” says Shaw. “This is an idea I got from Ralph Bakshi. He would also designate different artists to each scene and allow them to be themselves. He wouldn’t give them a house guide and make them draw like him.”

The challenging task of designing all the cryptid characters fell upon Samborski’s shoulders; she also created most of the watercolors that go behind the characters. Meanwhile, Shaw focused on the line drawings for all the human characters. Everything in the movie began as a practical image, drawn on paper using watercolor, gouache, airbrush and colored pencils. Then, the team used Photoshop to create the collage images. The actual animation was done using After Effects and the free rigging tool Duik. “It’s this amazing freeware tool that everyone should be using,” says Samborski. “We really couldn’t have made the movie without Duik. We also had some hybrid puppetry and replacement animation.”

Samborski mentions that she really enjoyed creating the Tengu, the birdlike protector of the mountains which has its origins in Japanese folklore. “I was trying to look at various drawings and go back to the culture of origin of these cryptids,” she recalls. “Every single cryptid does come from an existing mythology. I loved the Tengu by the virtue of how that puppet is rigged and moves, it is very much like the early drawings.”

She adds, “For me the film is about each of the individual characters’ relationships with the magical world. Each one has their preconceived notions about the magical world, about what it owes them and what they owe it. They try to do the best they can, but you know what they say about the best-laid plans. We can’t always know where things go.”

Shaw, who cites films such as Akira, Belladonna of Sadness and Fantastic Planet as the film’s visual inspirations, says he loves the film’s Baku creature, the Japanese supernatural being which devours nightmares. “There is this Japanese experimental manga called Comic Baku, and when I first came across the idea of a dream-eater, I thought it would be a great centerpiece for the movie,” he recalls. “Movies are very dreamlike, and you lapse into this other reality. So it works very well. I also love how Jane animated it — it’s this little elephantine being, and in the universe of the movie it’s the most important character.”

And how does the talented couple manage to live together and create art together while raising their small daughter at home? “I am the luckiest human being alive because of the way we work together,” says Samborski. “I feel like everything that I’m good at is what Dash needs help with, and all the things that I’m terrible at is where Dash comes in like a knight in shining armor. There are times where we are on each other’s toes! But Dash sees the big picture, and I can see the little details. We come to the problem from opposite directions and, thanks to some miraculous fate, we end up in the same place.”

Magnolia Pictures releases Cryptozoo on August 20 in the U.S.