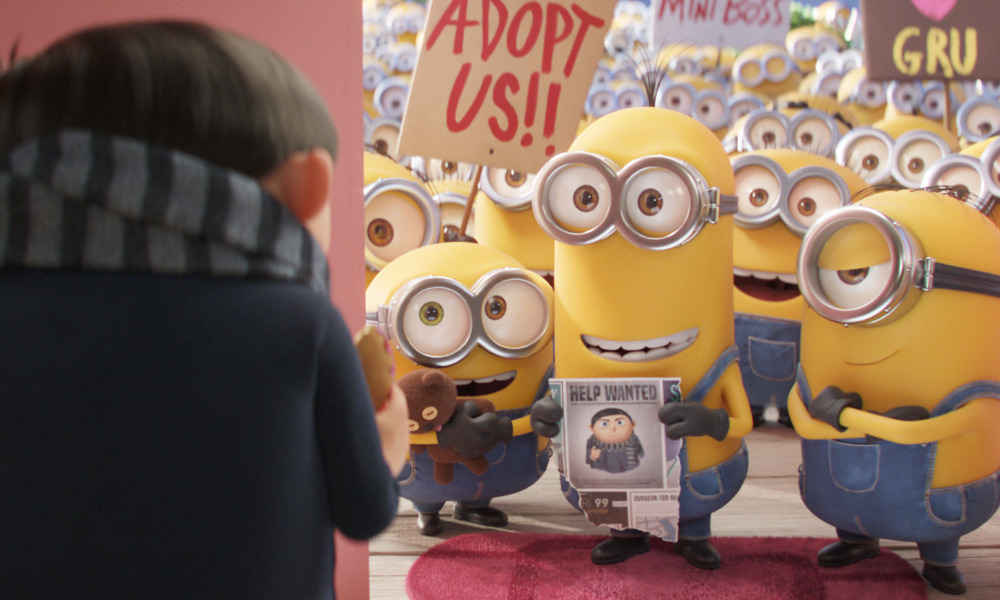 Lightyear, The Bob’s’ Burgers Movie and Marcel the Shell with Shoes On have new animation competition this Friday as Universal/Illumination’s much-anticipated Minions: The Rise of Gru finally opens in theaters, after being delayed by the pandemic for a few years. This fifth movie in the hugely successful Despicable Me franchise is directed by Kyle Balda, co-directed by Brad Ableson and Jonathan Del Val, and takes us back to 1976-era California when an 11 ¾-year-old Gru (voiced beautifully by Steve Carell) first auditions to become part of an evil supergroup named Vicious 6! And yes, those crazy-hyper, yellow creatures the Minions (voiced by Pierre Coffin) are all along for the ride… sometimes, helpfully!

The movie, which also features the voices of Taraji P. Henson, Michelle Yeoh, RZA, Jean-Claude Van Damme, Lucy Lawless, Dolph Lundgren, Danny Trejo, Russell Brand, Julie Andrews and Alan Arkin (now that’s a voice cast, folks!), is pretty much critic-proof — and judging from the reviews, this clever prequel has plenty of great jokes and fun sight gags and will keep the young ones entertained for its 87-minute run time.

Box office experts are estimating that the movie will make anywhere between $70 million and $80 million during its four-day opening weekend and another $70 million from international territories. The four previous Despicable Me movies have made over $3.7 billion worldwide.

Here is a sampling of reviews for the latest film, which has a 72% rating on Rotten Tomatoes (rottentomatoes.com) right now:

“Audiences know what to expect, and Illumination delivers, offering another feel-good dose of bad behavior.”

“The film features many hilarious moments — demonstrating that the funniest screenwriting these days seems to be for animated films…Unfortunately, as is so often the case with this type of fare, the final act features a plethora of extended fight and chase scenes that quickly prove wearisome. Carell, necessarily adopting a higher-pitched but still amusingly accented voice, continues to be a hoot as the devilish Gru, who somehow manages to be endearing even when behaving at his worst. And kids will continue to adore the gibberish-speaking Minions, especially when they bare their cartoon butts.”

“Packing their shtick into a speedy 87 minutes, returning director Kyle Balda delivers a perfectly painless romp that should enthrall kids, entertain adults and keep Minion cosplayers employed for many a birthday party to come.”

“Director Kyle Balda redeems the best part of the franchise he helped create by wisely giving Gru — and any slightly more serious storytelling — a back seat to the most fun you’ll see this side of Wile E. Coyote’s Acme catalog.”

“Like the Minions, this instalment is barely distinguishable from any of the others, but it’s easy to be won over by its nutty joy and enthusiasm.”