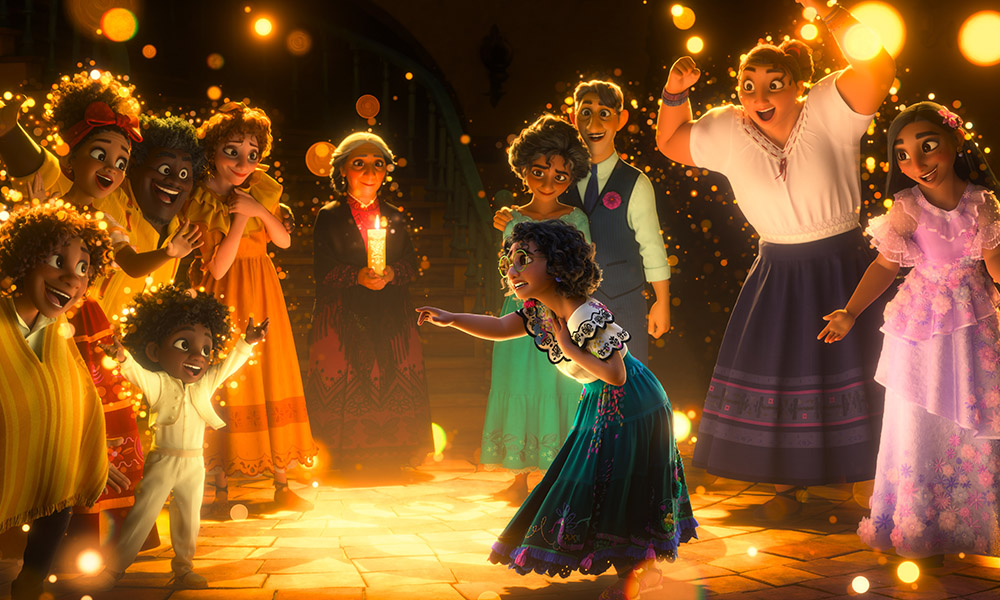 Walt Disney Animation Studios’ 60th animated feature aims to enchant audiences this holiday season, and critics are largely predicting that this magic bolt of musical family entertainment won’t misfire. Arriving in theaters November 24, Encanto is set in Colombia and tells the story of a family gifted with unique magical powers — except for Mirabel, a young girl who soon finds the restoration of the Madrigal clan and their supernatural casita. The picture is directed by Zootopia duo Jared Bush and Byron Howard, co-directed by Charise Castro Smith and features original songs by Lin-Manuel Miranda.

Conjuring an impressive 90% Fresh on Rotten Tomatoes, Encanto is earning praise for its colorful, energetic and emotive animation and message of acceptance — although an expansive cast of characters spilling over the story crowded a few reviewers out of complete enjoyment. Here is a quick sample of what the critics are saying:

“Much of the movie’s considerable charm comes from the fact that despite the magical elements inherent even in its title, the story is basically about the dynamics of any large, close-knit family of contrasting personalities … As much as the story hinges on Mirabel discovering what threatens the Madrigal magic and endangers their refuge, on a more fundamental level it’s about this big, complicated group reestablishing its harmony, learning to appreciate, even celebrate, one another’s qualities, whether they are extravagant or simple. And it’s about a community coming together to rebuild what’s lost and fortify one another in the process.”
— David Rooney, The Hollywood Reporter

“Yes, this is a Disney movie, but with a script that strives until the very end to say that you are defined by how you see yourself, it would have been been far more satisfying to end with something that implies you can’t fix years of trauma like magic, bu everyone can at least start with today. For those who look beyond the ready-made dramas of the film, Encanto is an emotionally wrought movie about the ways family can hurt us and how ‘normal’ can be a four-letter word. That’s a lesson and a tone that doesn’t always come together, but at least provides a magical, impressive spark all its own.”
— Kristen Lopez, IndieWire

“…Encanto has been visualized with a vivacious naturalistic glow (swirling flower petals, eye-candy pastels) that, at moments, is nearly psychedelic. The songs, by Lin-Manuel Miranda, are syncopatedly infectious, word-weavingly clever, and unabashedly romantic; they keep the film bopping. And the whole picture is intricate and accomplished enough to make the era when your average Disney house animated feature was several tiers below that of Pixar seem like ancient history. Yet for all the dazzle on display, none of it would mean much if Encanto didn’t present its heroine’s moving journey in a way that kept surprising you. That’s the key to enthralling animation — it stays one jubilant beat ahead of the audience.”
— Owen Gleiberman, Variety

“[Lin-Manuel] Miranda’s accordion-powered music is a part of the movie’s overall spotlight on Colombian culture, and the various different Madrigals pop amid this vibrant landscape, courtesy of some outstanding animation. [Stephanie] Beatriz’s Mirabel is a poster child for awkwardness – however, that plus a wonderful sense of humor and big heart make her a quite enjoyable character to watch on a journey of identity and acceptance. And voiced endearingly well by [John]  Leguizamo, Bruno arrives later in the proceedings but still manages to hijack Encanto as the family’s scene-stealing, oddball black sheep.

The plot, however, lets them down after a buoyant start gives way to a third act that seems to miss the film’s central point. Also, the family is so huge that some interesting supporting characters get lost as the story shifts to Mirabel’s main quest, and the movie just doesn’t have enough run time to flesh out the fascinating relationship between the Madrigals and the neighbors who hang on their every deed.”
— Brian Truitt, USA Today

“…Maybe this family of fanatical overachievers need to see how their supernatural superiority is a neurotic group symptom of unhappiness. Maybe they need humble Mirabel to bring them to a new enlightenment. So are their gifts a good thing or a bad thing? They didn’t seem like such a bad thing in the film’s opening two acts: these gifts seemed to be part of everyone’s innocent well-being, abilities lightly and modestly worn. And as the rescuing of these powers is the plot motivation, it is an uncomfortable turnaround for these powers to be represented as something to be opposed or surmounted — a paradox which the film does not acknowledge or resolve — especially as we get a pretty broad hint that they may in any case be magically restored. This is a flavorless, unsatisfying film.”
— Peter Bradshaw, The Guardian