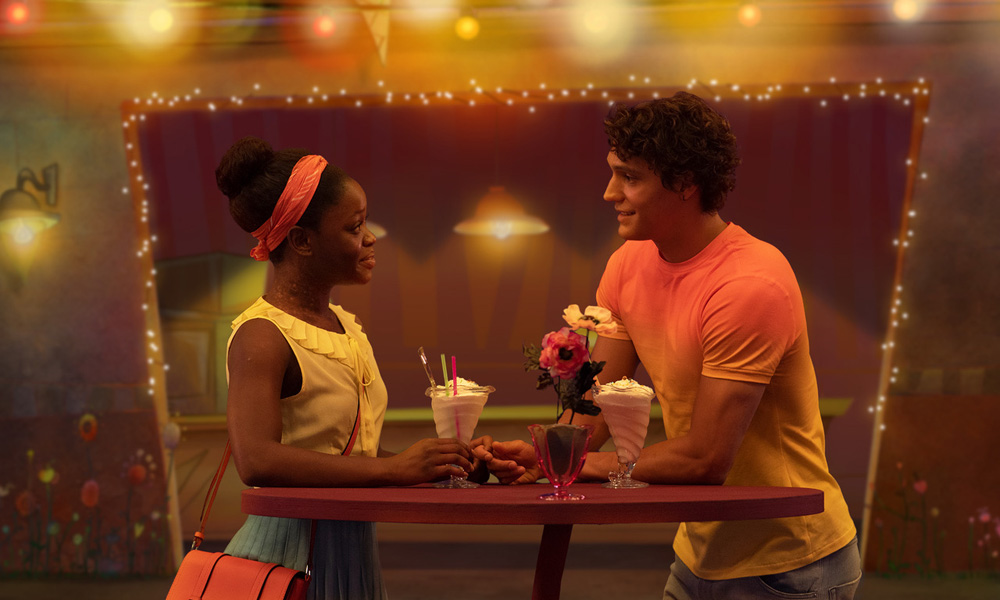 Among the dozens of compelling animated features which were unveiled at this week’s Annecy Festival was the German-Belgian-Dutch feature Coppelia. This modern interpretation of the 1870 comic ballet mixes a clever combination of 2D and CG animation and live-action dance. (The work was originally choreographed by Arthur Saint-​Léon to the music of Léo Delibes, with libretto by Charles-Louis-Étienne Nuitter, based on stories by E.T.A. Hoffmann.)

We emailed a few questions to the film’s directors Jeff Tudor, Steven De Beul and Ben Tesseur and the producers at MotionWorks about their genre-bending feature, and they were kind enough to give us their answers:

Can you tell us a little bit about the genesis of the project?

Jeff Tudor: Well, the very first pitch was in December 2014. I carried on working on the development until Steven, Ben and I started working together in September 2016 — I had to wait a while until they were available! So 2016 was when we really got things moving together. The development that happened before Ben and Steven came on board was for testing and exploration — we started again from scratch when we got together.

Steven De Beul and Ben Tesseur: We saw that very first pitch and were immediately triggered by the concept Jeff came up with. Unfortunately, we weren’t available to work on it right away. We were very glad Jeff could wait for us until September of 2016.

Did you know from the very beginning of development that animation was going to play a big part in the final version?

ALL: Yes, from the start the concept was to mix live action and animation. The antagonist of the story is a cosmetic surgeon who is trying to create his ideal robot-woman, Coppelia. Animation was the obvious choice to show the contrast between what’s fake and what’s real. We have explored several routes, mixing various animation techniques with live-action ballet in different constellations. The outcome is this mix of live action and animated characters, living in an animated world consisting of real and drawn elements. 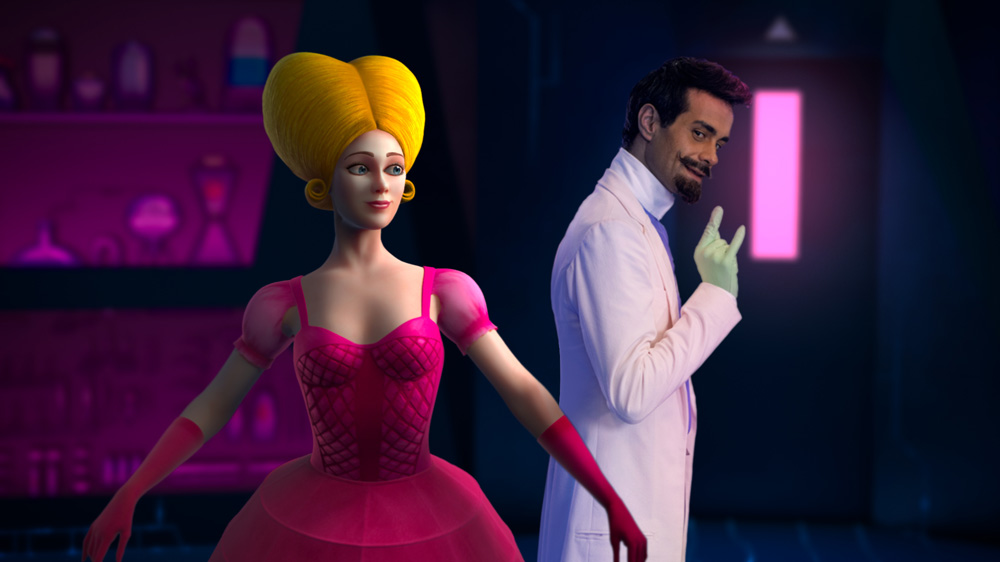 Why did you decide to use greenscreen technology and animation to visualize the story of this ballet?

ALL: We wanted to create a unique universe as the setting for our story, a world that has a language of its own. A lovely and friendly world for Swan and Franz, contrasting with the hard and sinister world of Doctor Coppelius. Not only in the sets and artwork, but also in the movement of certain characters. Doing so, our audience can experience the story, told using the language of dance and body language, in both a visual and auditory way.

JT: I call it “silent acting.”

MW: The animation, lighting and rendering as well as the background-production and most VFX were created in Germany. The majority of the German team was located at MotionWorks in Halle/Saale, with a few artists in Bremen and Hannover. The team at MotionWorks included those artists that set the cameras for the shots for the animators and those that were responsible for lighting and rendering.

The live-action dancers were recorded against green and blue key backgrounds (the live-action shoot was in Amsterdam), which were replaced with either painted backgrounds or CGI-sets that were also created at MotionWorks.

Which animation tools were used to create the animation and how many people worked on it?

What was your biggest challenge in terms of mixing the animation with the dance footage?

ALL: These kinds of productions are always a huge technical challenge, for all people involved. Like any film that mixes live action with animation, one of the biggest challenges was achieving believable integration through elements such as lighting and shadows.

An extra element to deal with, and one of the elements that makes our film stand out, is telling the story through ballet. From a technical point of view, we all had to deal with the complications of working on color-key. But for the shoot, we had to install everything on a special sprung floor.

From a filmic point of view, we had the challenge of acting all scenes in front of a color-key. Without any dialogue. And without, of course, having the animated characters on set. Very often, our actors had to imagine they were interacting with an animated character. Before actually shooting the shot, it was rehearsed with a stand in. When possible, we had blue suit stand-ins to make the interaction easier to play. But that was not always the case. That was not an easy task for everyone involved. We had quite some mountains to climb, but we had a great team joining us on this great voyage. 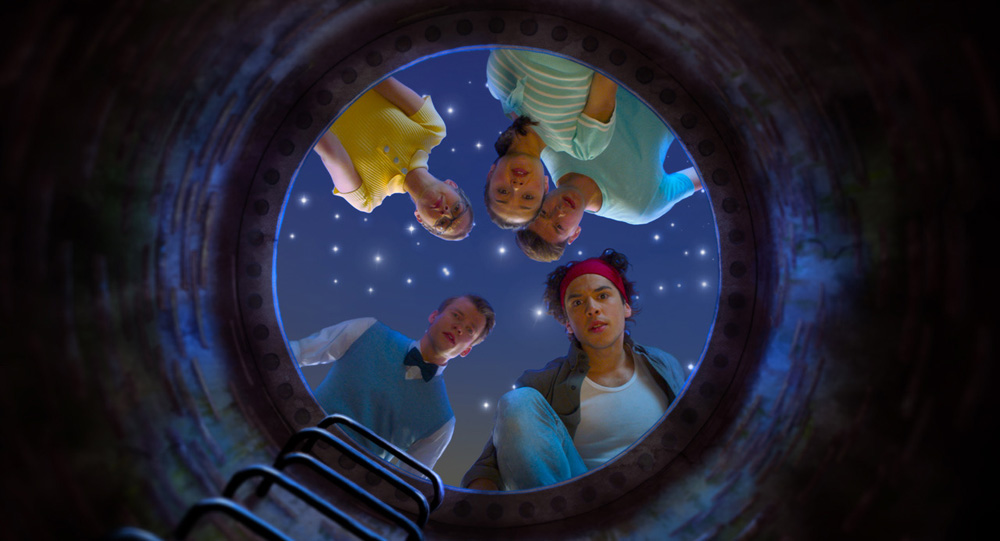 Was it more difficult to incorporate a dance piece with animation than a regular live-action production?

ALL: Yes! Dance brings its own challenges: for example, the dancers needed a sprung floor. Sprung floors have quite a pronounced bounce factor! Many shots had to be stabilized to remove the bounce.

Like athletes, ballet dancers need to warm up properly, so you have to factor in their preparation time before shooting dance sequences, which adds extra planning challenges for the ADs. And they cannot do endless takes — it’s too exhausting for them.

We had to plan the choreography really carefully, with integration in mind. And on top of all those challenges, most of our cast are full-time professional dancers. That means they are constantly rehearsing and performing. So we had to rehearse on their free days and at weekends; and we had to shoot during their vacation time. We had a lot of time pressure.

Over the past 10 years we have seen a lot of progress in the tech/animation field that allows smoother interaction with live action. Can you elaborate on how these new technologies help you in the process?

ALL: We were probably quite old-school in the technology we used. We did a motion-capture test, and our VFX supervisor (Matthijs Joor) considered 3D tracking, but in the end they didn’t work out. We used green and bluescreen —  and some yellow! — and green and blue suit stand-ins. And hundreds of tracking markers and measurements taken by the VFX team. 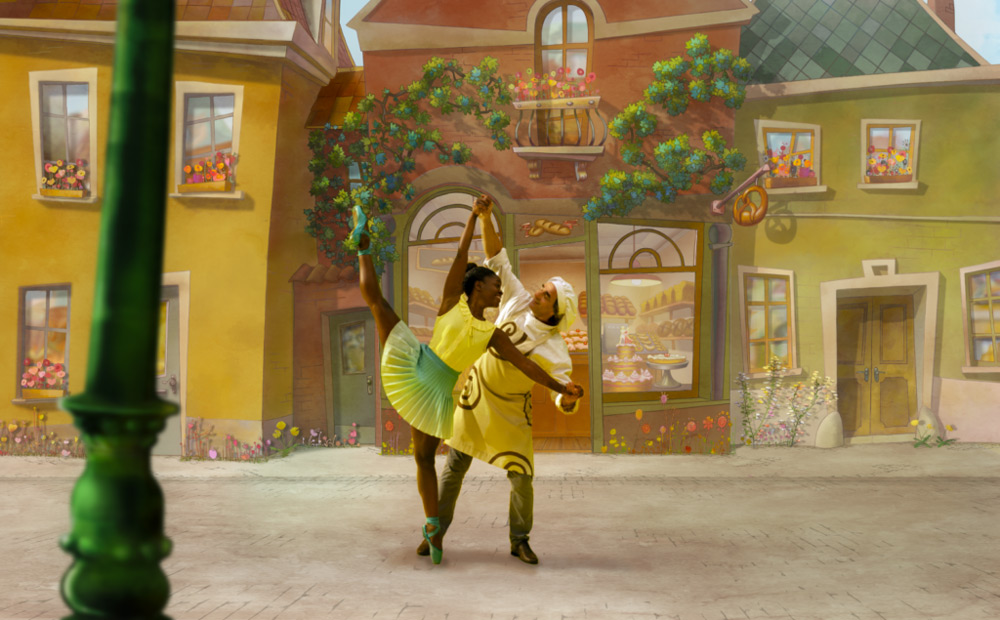 What are you most pleased about this hybrid production?

ALL: We don’t think of the film as a version of the ballet: we see it as a silent movie, using the language of dance, music and animation to tell the story. We’re most pleased about the performances of our cast. Shooting in green and bluescreen is really technical and tricky. And shooting a film is such a different workflow to what the dancers are used to. We think our actors really did a great job.

JT: I really enjoyed the close collaboration with Ben and Steven. We shared the same vision on every aspect of the film. We didn’t split the tasks at all, we were involved in making decisions on every element together, working as one.

BT: I agree completely. Since our first steps in 2016 we have been collaborating in a very organic and natural way. Very often with Adrienne Liron (producer) as our fourth companion. We have spent many, many hours working on and talking about all aspects of the film. Always taking into account the other partners’ visions and ideas, to achieve the best result possible.

SDB: I agree with my colleagues. It was a pleasure and an enrichment to work on such a challenging film, both technically and artistically, with Ben, Jeff and all other partners.

What was the biggest lesson you learned from the experience of working on this movie?

JT: Keep the set floor clean. It saves time in post! And Ben likes a fried egg sandwich at 11 o’clock, otherwise he can’t make it through to lunch!

BT: It’s not a new lesson, more a confirmation of something we already knew: making a film is like building a very complex clock. Every little spring, every dial, every component has its importance. And it’s only when all elements work together nicely, that the end result works.

JT: We learned many, many lessons during the making of this film. We’re going to use them all in planning our next film!

SDB: Making beautiful things together is the best there is.