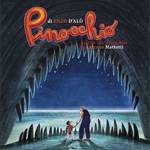 Italian director Enzo D’Alò serves up a faithful new animated feature based on the original Adventures of Pinocchio.

Although Italian author Carlo Collodi wrote his hugely influential children’s novel The Adventures of Pinocchio in 1883, many people remember Walt Disney’s 1940 animated feature when they recall the tale of the wooden boy. This year, thanks to the hard work of Italian director Enzo D’Alò and his talented team of artists at Cometa Film (Italy), 2d3D (France), Walking the Dog (Belgium) and Iris Productions (Ireland), animation lovers are treated to a lovely new adaptation, which is much more faithful to Collodi’s original vision. We recently had the chance to chat with D’Alò about his new feature, which opens in Italy later this month and is featured at Cartoon Movie in March: 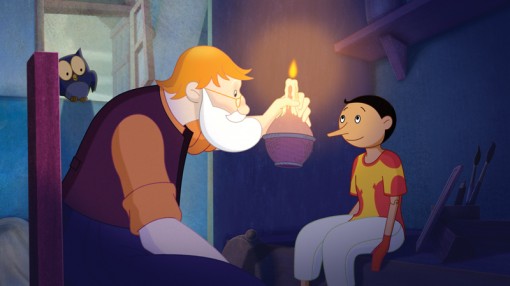 Animag: We know you’re very busy with your film’s Italian premiere coming up in the next few weeks. Can you tell us a bit about the origins of the project?

Enzo D’Alò: Well, I started working on the film back in 1999. I presented the trailer for the movie, and it was well-received by RAI, but we had to stop working on it because we found out that Roberto Benigni (Life Is Beautiful) was also working on a live-action version of the book. So, I continued to work on my 2001 movie Momo. I continued to work on the script, and fortunately, we also found ways to produce the animation using new technologies, via Toon Boom’s Harmony software. It was around 2008, when we went back to production. This time around the film is all done digitally, the backgrounds are done using Photoshop. The delay in production opened up lots of new doors for us.

We had used Toon Boom before, mostly on the TV series that we worked on. We collaborated closely with the Toon Boom staff to create a strong paperless pipeline.

I kept in my head the plans I had for the movie, and better versions of the software would come along during the development process. I believe we were the first in Europe to create a movie digitally. When you are working on a digital production, you can keep fine-tuning it, change the compositing, and constantly make it better. To be honest, it was a lot of work for my team and they had to learn a lot quickly in the beginning. But they picked up speed after the first six months. 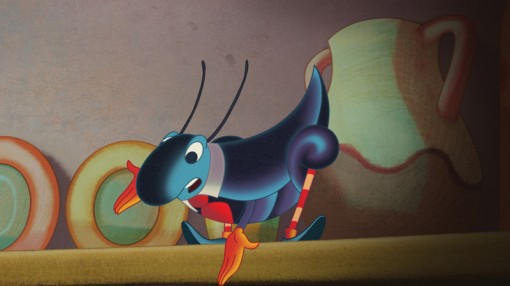 How was the work split between the studios?

D’Alò: We shared the bulk of the work with the other studios in France and Luxembourg; there were about four studios in Italy that helped with the project as well. We did the storyboards in Italy. It was very important to really research the locations. The landscapes that Collodi had written about were all here in Tuscany, so the team came to the region to do research and photography. It’s all actually the same locations used in the 1947 live-action adaptation of the movie, which stars Vittorio Gassman. Once you climb to the top of the hills, you can even see the sea, which plays an important part in the second half of the book. 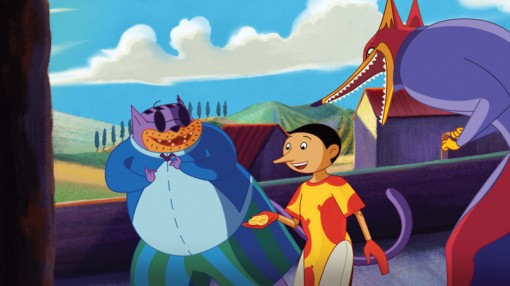 Of course, Pinocchio has inspired numerous movies and TV series, and animation fans have loved Disney’s 1940 version for many decades. How is your movie different from all the other previous adaptations?

D’Alò: We stayed very close to the original text. We even used a lot of the original dialog, because most of it sounds contemporary. It was incredible for me to discover that we didn’t need to change much for today’s audiences. It was also important for us to keep Pinocchio’s relationship with the Blue Fairy intact. In the book, the fairy is a blue-haired girl, and Pinocchio has a crush on her, so that is a strong motivation for him to be a good boy.

Overall, it was very important for us to present the true version of Pinocchio to the world. I like the Disney movie very much, but our film is closer to Collodi’s vision. For example, in the Disney film, the cricket becomes Pinocchio’s conscience. In Collodi’s book, there are two kinds of animals, those who judge Pinocchio, like the cricket, and those who are really his friend. There’s a dog in Collodi’s book that helps Pinocchio from the Green Fisherman. He helps Pinocchio escape only because of their friendship. The dog values their friendship, and doesn’t judge Pinocchio. That’s what a true friend does. 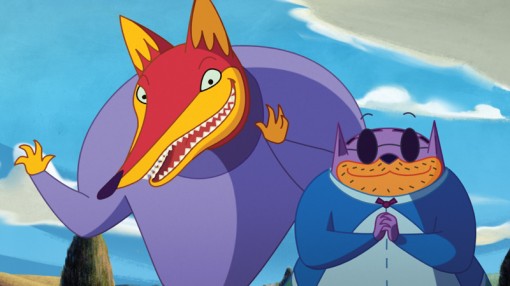 Can you perhaps give us some personal insights about why the story of Pinocchio has such a strong hold on our collective imagination?

D’Alò: The wonderful thing about Pinocchio is that everyone imagines something different when they read the book. It’s the third most popular book in the world, right below The Bible and the Koran, and the other two are religious books.

What I think is wonderful about the book is Gepetto’s relationship with Pinocchio as a father. Like many fathers, Gepetto wants his son to be a certain way, and the child doesn’t want to do what his father wants him to do. He is a carpenter, and he makes his son out of a log of wood. I think that’s a very powerful image.

The American author Paul Auster wrote beautifully about Gepetto and his relationship with his son Pinocchio. He said a father fears the day when his child begins to give him gifts. This is also true when Pinocchio saves his father from the shark. And yes, we have a shark in the movie, just like the book—which is different from Disney’s version, which had that giant whale. It’s logical, because Collodi sometimes refers to the shark as a sea monster. 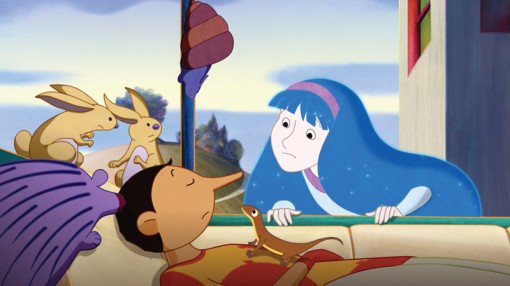 What’s your take on the state of the animation industry in Italy?

D’Alò: Our animation industry suffered a lot because of the financial crisis. It’s very hard to find financing these days. That’s the biggest problem. Also, when there’s not continual work in the country, the good animators leave the region and find work in places like Germany and the U.S. We hope Pinocchio can help reverse that trend and Italian producers will think that animation can be a good business investment. 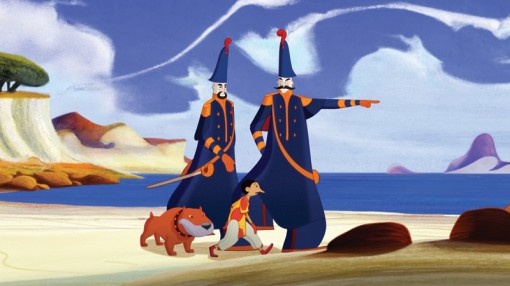 What are some of the animated movies that have been a big influence on your work?

D’Alò: I have always admired the quality of animation in Disney’s original, animated Alice in Wonderland. I also like many of the Pixar films, especially Monsters, Inc. When the story works well, and it’s helped by the technology, it makes for a wonderful experience. I think if a story is strong, you can actually have less animation. In European animation, we really have to move forward in the story department.

I think it’s important for the audience not to pay attention to the technology we use in a movie. You have to use the cinema as a medium not to just show off your technical capabilities. Sometimes we see movies that are made just so people can show off what they can do. The history of media tells us that what’s important is that you communicate something, not how you do it. When you’re directing a movie, it’s your job to find the best way to tell the story, and the technology should be used to help you do that job. It shouldn’t be about the technology. 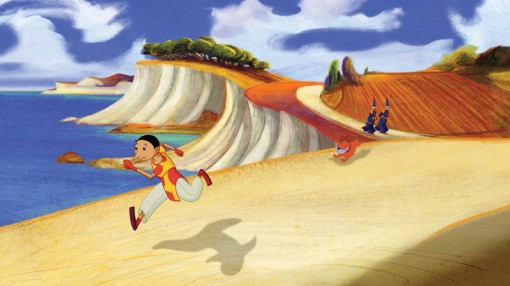 So, what are your feelings now that the movie is finally opening in Italy and other key territories after working on it for such a long time?

D’Alò: This is one of the first times that we have finished an animated movie in Italy that we can export to the world. It’s been an important challenge for me. When RAI Fiction proposed this project to me, it was very hard for me to say no. Pinocchio is my fifth movie, and I think you really need experience to tackle such a big title. You need to feel free to take some risks and do something completely different. I have been very lucky to have such wonderful, talented people with me on this movie. Everyone in the many studios working on the film was charmed by the story and worked day and night to make it better. I was also very fortunate to have these new technologies that helped us bring to animation the illustration style of our production designer Lorenzo Mattotti. When we saw how the film was coming along, we truly felt very excited and proud.

Pinocchio will premiere in Italy on February 21 and in France on Feb. 20. The film will have its U.S. premiere at the N.Y. Intl. Children’s Film Festival on March 16 and will also be featured at Cartoon Movie in France. 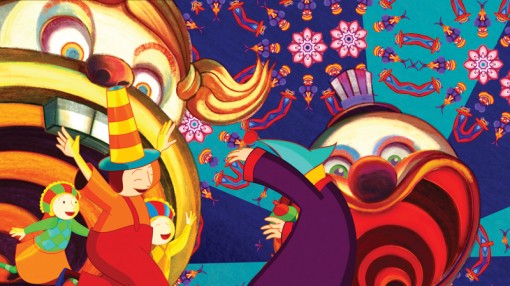