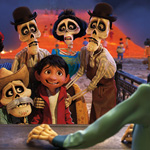 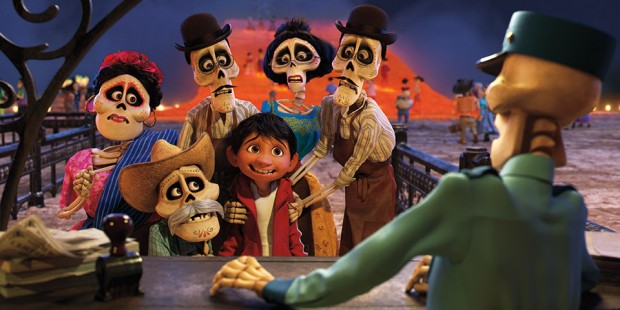 Every child has a dream of what they will become. For Miguel, the tween lead in Pixar’s highly anticipated new film Coco, that vision is to become a musician.

But it’s not going to be that easy. This 12-year-old boy living with his very extended family in the fictional Mexican town of Santa Cecilia is forbidden to play music by a longstanding family curse, and expected to go into his family’s shoe business. The story is set during Día de los Muertos (Day of the Dead), which becomes the perfect time for Miguel to explore his family history in hopes of making a future as a musician for himself.

To prepare for Pixar Studio’s 19th animated feature, director Lee Unkrich and co-director/screenwriter Adrian Molina took a deep dive into the traditional celebrations surrounding Día de los Muertos by taking multiple trips to Mexico with the crew to learn how the holiday is celebrated today. They pulled most of their ideas from the Oaxacan festivities they observed. Though Día de los Muertos has roots in 500-year-old Aztec culture, today the faithful fashion ornate altars featuring skeletons, favorite foods of the deceased and vibrant flowers.

For Unkrich, who grew up in the Jewish faith, the Mexican traditions were a fascinating and uplifting contrast to his own. “It was just so comforting and vital to see people passing on these stories about their loved ones as part of Día de los Muertos,” says Unkrich. “You have these vibrant colors and the ofrendas (objects placed on a ritual altar during the celebration) full of things their loved ones enjoyed, which was so different from what I grew up with—the Yahrzeit—the Jewish tradition of lighting a candle for a loved one who has died, which seems much more somber to me.”

Inspired by the Colors of Mexico

Unkrich, who won an Oscar for directing Pixar’s 2011 feature Toy Story 3, says visiting Mexico and witnessing how meticulous people were with their ofrendas, the movie’s lighting and color became very important to him. “The lighting of the candles plays a huge part in this holiday, as do the bright, vibrant colors you see everywhere and in everything,” says Unkrich. “If we wanted to tell the story of this holiday, those elements had to be just right.”

“When I first heard of the idea for Coco, I was still a storyboard artist, but I knew I would do anything to be part of the movie. So, I pitched Lee my ideas and he was very supportive,” says Molina. “The more we talked, the more we realized our ideas of how the story should be told were totally in sync.”

“We wanted everything in the film to feel like the culture, stories and people of Mexico, so going there to experience those things was so important,” adds Molina. “We were welcomed into people’s lives and that made it possible for us to absorb the details of the places where we went.”

Designers, musicians and animators collaborated to create city architecture and use colors that were authentic. As the film opens on the city invented for the movie, viewers can see brightly colored papel picado banners (a traditional cut-paper decoration) attached to all the buildings.

Since this is a film about an aspiring musician with a family history rooted in song, the sounds of the movie became crucial. Coco‘s score is written by composer Michael Giacchino (Up, Ratatouille), and features a catchy Bolero Ranchero-style song titled “Remember Me” by fellow Oscar winners Kristen Anderson-Lopez and Bobby Lopez (Frozen).

The film features the voice talents of Edward James Olmos, Benjamin Bratt, Cheech Marin, Alanna Ubach and Gabriel Iglesias. The central character Miguel is played by newcomer Anthony Gonzalez, who Unkrich says “…can do everything and anything that the character needed.” In addition, Gael García Bernal voices Miguel’s sidekick, Hector: a Mexican trickster spirit in the guise of a skeleton.

For Pixar’s animators, telling a story set during Día de los Muertos meant they would have to take a symbol of death—fleshless skeletons—and somehow make them alive and real, even when they stood next to the “living” characters in the film. Supervising animator Gini Santos and her team added depth to the eyes of the skeletons by using eyelids and shaping the eyes so they were as expressive as possible. They also gave them mustaches and lips.

“We wanted their eyes and faces to tell the story and invite people into the story, so they’re not meant to be scary, but more like living people,” says Santos.

Animators also had to make the movement of the skeletons in their clothing seem alive. If they simply placed cloth on the skeletons’ bony structure it would fall flat and look too lifeless. In early tests, the clothing even fell in-between the ribs on the skeletons’ ribcages. They eventually had to set up “rules” that told their software there were no gaps in the ribcages. For the female skeletons, they created parameters that puffed out their dresses as they danced so it looked like a living woman with flesh was wearing the frocks.

Miguel’s dog Dante came with his own endearing, yet complicated set of challenges. As a hairless Xolo dog, his entire body would be visible to the audience and nothing could be hidden underneath fur. Animators would have to rely on techniques they developed while working on the bears in Brave. One was volume simulation that gave natural movement to the part of the dog that wiggled while he walked, and the other was a skin simulation that made the stretch of Dante’s uneven, imperfect skin seem believable over his skeleton.

The film’s most striking visual achievement is the Land of the Dead, created by production designer Harley Jessup and lit by cinematographer Danielle Feinberg. Miguel finds himself transported to this place where his ancestors live when he dares to pick up an old guitar and play it. Once there, we watch him traverse an astonishing Victorian-inspired city that’s stacked into the skies. Multiple generations of the dead have come to live here, each one building on the structures created by the previous group of the deceased.

Feinberg found ways to create a unique lighting strategy by working with code. There are shots of the Land of the Dead that contain about 7 million individual lights, which makes for the otherworldly look achieved by the team. But hand-placing the lights would have simply been impossible, according to Feinberg, because of the cost and time needed. Feinberg realized that if they used a bit of code created during the 2014 movie The Good Dinosaur, which groups lights together, it would be possible to get the look they wanted. With this code, lighting artists could tell the computer to find all the streetlights in a shot, for example, and put a little light inside them. So the computer considers them all one light and the shot becomes relatively simple to stage.

“There are always things we’ve never done before, but that’s part of what interests and excites me about making this film,” says Unkrich. “I wanted this world to look like nothing we’d ever seen.”