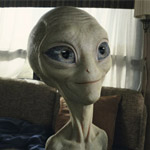 One thing’s guaranteed: You’ll never look at a tabloid UFO photo, or a Jelly Bean, the same way ever again. And the creative talents behind the feature films Paul (directed by Greg Mottola) and Hop (Tim Hill) are pretty sure they will change the way you think about integrated CG characters as well. We’ve come a long way since Jar-Jar and Garfield, folks.

In Hop, from Despicable Me studio Illumination Entertainment, the Easter Bunny’s rebellious son, E.B. (voiced by Russell Brand), runs away from the fantastical candy factory of Easter Island to pursue his dreams of becoming a rock ’n’ roll drummer. Rhythm & Hues helped navigate the animated E.B.’s adventures in the real world, where he befriends a human (James Marsden), and the digital world in which he ultimately faces down a nefarious animated chick (Hank Azaria) bent on overthrowing the bunnies. 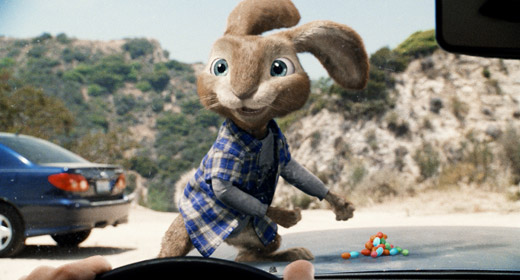 Paul, from the minds of Brit comedy duo Simon Pegg and Nick Frost, flips the classic American road trip movie on its head as two sci-fi nerds travel to Roswell and pick up quite the souvenir: an extraterrestrial on the lam (voiced by Seth Rogen). Double Negative delivered the animation for the little grey dude, inserting him into high-action sequences and pulling some cool camouflage effects as he and his human chauffeurs are chased by government goons while he races to return to his home planet. 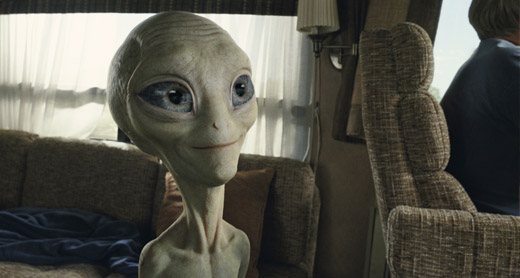 The key for both production teams was to create characters that would not only blend into their live-action environments, but broadcast personality and appeal to audiences. For Hop’s principle CG critters, Illumination turned to accomplished artist Peter de Sève (Finding Nemo, Ice Age trilogy). As exec producer and Illumination founder Chris Meledandri points out, de Sève’s main challenges were to make the rabbit come off as a young adult rather than a cutesy bunny and to create a design that would translate well from paper to 3D computer model.

“It’s sort of a multi-pronged, multi-level approach,” explains director Tim Hill, “You start with a character that’s photoreal in one sense and a caricature in another, so it becomes something more than a photographic bunny. From there you have to give it an anthropomorphic quality that lets us enjoy him when he’s talking or acting.” He adds that, unlike fully CG projects, this hybrid film required a special attention to fur, lighting and the specularity of the eyes to make an animal seem real, while maintaining that human quality. 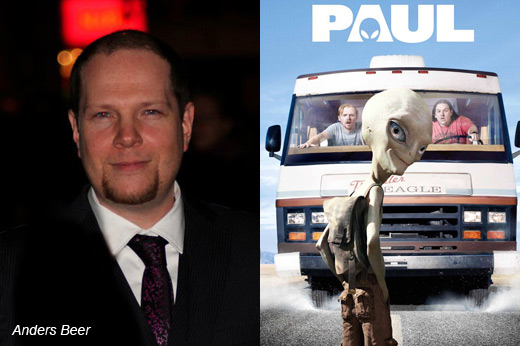 “There was a lot of work finding the happiest compromise for range of movement in the face and the visibility of the eyes, being so black it was hard to track motion, hard to read expression,” says Beer. “Eventually they cast Seth Rogen because of his charisma—that made it even harder. Seth is a six-foot guy; hairy, heavy set, the complete opposite of Paul! That was fun on the animation side, finding that character inside this spindly little guy.”

The animators solved the eye problem after testing numerous designs based on different animals. They ended up with the dark, almond eyes the producers wanted, but incorporated a lot of depth and texture inside the iris. DNeg also had to perfect the refraction of light off the lens and manipulate the lids and hairless brows to emphasize Paul’s emotions. 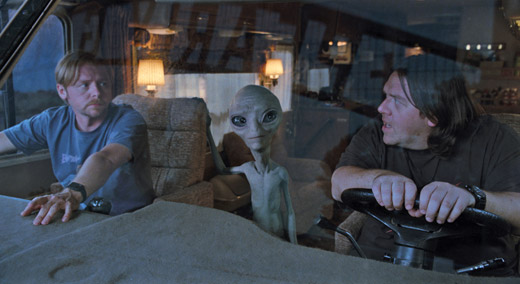 “What we would normally do in the brows and lip synching we had to emphasize in the eyes because they were the most prominent feature,” Beer explains. “It was a lot of time, a lot of work … up until we were three quarters done with the film, we were reworking the rig around the eyes, making sure skin moved and wrinkled and the shape stayed consistent.”

Welcome to the Real World

From Meledandri’s perspective, blending animation and live-action production strategies was one of the biggest challenges on Hop. Instead of having the whole film plotted out in advance, the animation team had to tackle spur of the moment changes to the story, action and dialog.

“Here, it was much more geared toward making the film in pieces, because you have all the sequences storyboarded that are combining live action and animation,” he explains. “You do that primarily before you start shooting, but given the nature of how things work and the desire to improve upon what’s been done, that storyboarding and re-storyboarding process happens all through pre-production, production and post-production.” 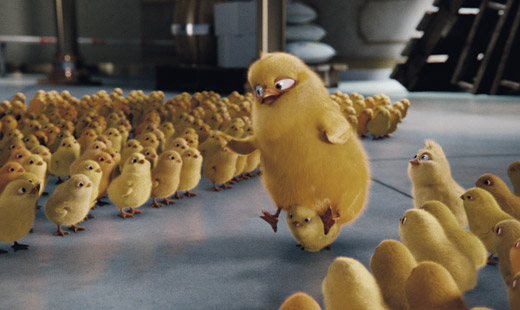 When it comes time to shoot, Hill notes the need to choose background plates carefully—like avoiding scenes in direct sunlight, something he learned on Garfield. Another sticky wicket is choreography using props. “Having a character go behind things, through shadows, interacting with objects…” he elaborates, “Not only that, you need to get the illusion that there’s a real character there. Having an actor react to something that’s not there and have it believable, James Marsden did a great job of that.” To help Marsden, animation supervisor Chris Bailey manned an E.B. puppet during rehearsal takes. Marsden was then able to replicate his reactions to an empty space or prop meant to host E.B.

Puppets and stand-in rigs also served the Paul team well. What Beer describes as metal rods with ping-pong balls for eyes were used to replace Paul sitting in the RV or standing. Despite the “amazing amount of clean-up” this created for his crew, one scene made it worth while: 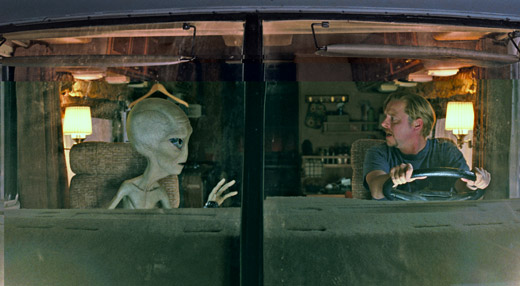 “Nick [Frost] is strangling Paul in the RV … we needed something for him to grab, so we had the stunt puppet,” he explains, “We put a green sack over its head to paint it out and had Nick strangle the heck out of this puppet … Finally, he was getting frustrated with the takes so he took it and drop kicked it in the head.” Beer suggests this footage would make excellent DVD bonus material.

Hill and the Rhythm & Hues team had the added difficulty of bringing one of Hop’s live actors into an all-digital environment. With a pressing schedule and only preliminary designs for the Easter factory, a green-screen stage with minimal practical elements—a vat, multi-leveled background and a steel cage holding Marsden—was put up. R&H later incorporated the digital sets and characters into the live footage. 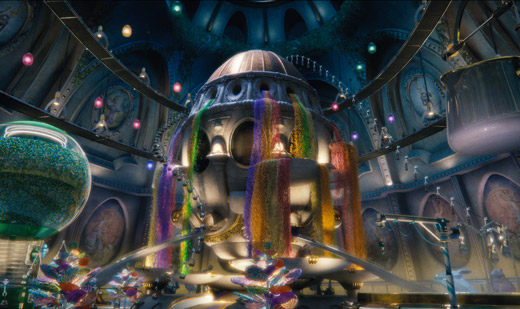 Hill, who marvels at how rapidly animation technology has improved in recent years, worked closely with the R&H team throughout production. The acclaimed creature studio handled character modeling and animation, CG environment builds, compositing, paint and lighting using a combination of Maya and their proprietary pipeline. “We were with them the whole way—design phase, building digital assets, seeing how the models would animate. Lots of animation tests, dialog tests, fur tests … It’s amazing that we did it all in 10 months.”

For Beer, with a history in both the feature animation and vfx spheres, Paul provided a great opportunity for him and the DNeg team to cut their teeth in character—not creature—animation. Since their time with Rogen would be limited, the team shot a rehearsal of the film on a stage over two days, tracking Rogen with an Xsens accelerometer-basted mo-cap suit and multiple cameras.

Once the live-action plates came back, the crew realized they would have to reinvent many of the scenes. Beer estimates about 95 percent of the performances had to be tweaked. Luckily, they still had the Xsens suit, and the animators took full advantage by shooting tons of reference of themselves, allowing Beer to nail down which blocking worked best before giving the go ahead to finish animating the scene. 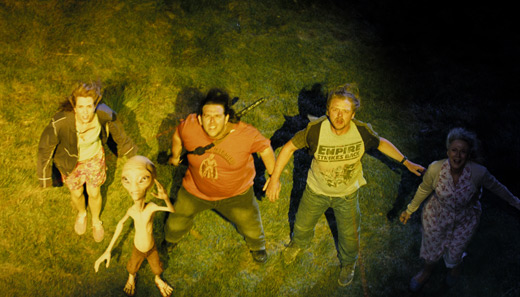 The DNeg crew—which fluctuated between six to 36 throughout production—relied primarily on Maya, with the aid of some proprietary tools that allowed skin to appear to slide over muscle and bone on top of a Maya rig. ZBrush and XSI aided the model sculpting and the shots were rendered with RenderMan.

Like any good alien, Paul also has a special power: the ability to go invisible. Beer and vfx supervisor Jody Johnson looked at the color changing patterns of octopi and squid and combined this with a mirror-like quality. Beer explains that the pattern was laid on the surface of Paul’s body like a texture map, then slowly turned to a reflection of the background behind him and slightly refracted, handled on 2D and 3D levels.

But the most important thing, as all point out, is to have a relatable character. “[The producers] want a character that was believable and realistic. Simon said it can’t be Jar-Jar Binks, it can’t be a cartoon character. But it also can’t be just a creature—something so spectacular the audience can’t connect to it,” Beer shares. 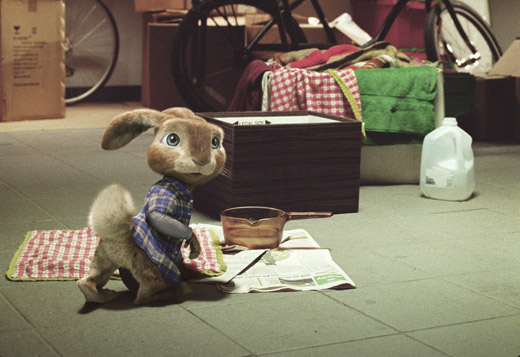 For Meledandri, it’s not the technical wizardry but the emotive moments that awe him about Hop, like the scene where E.B. tells his dad he won’t be taking over the family business. “There’s a wonderful marriage between Russell’s vocal performance and the animated performance; as I watch it, I really believe the character’s emotional predicament.”

And a little humor never hurts: “This might sound puerile,” Hill cautions before revealing one of his favorite Hop moments, “But I like it when E.B. poops Jelly Beans. I don’t know why. It’s just funny.”