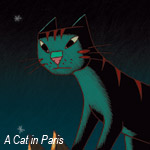 A live-action Snow White makes a big push at the box office this weekend, while an Oscar-nominated animated feature from France gets a limited release.

Directed by Jean-Loup Felicioli and Alain Gagnol, the film is about a cat that leads a double life as the pet of a detective’s daughter by day and a slinky cat burglar by night.  The film will be released in New York in both the original Oscar-nominated French version and a new English version featuring the voices of Marcia Gay Harden, Anjelica Huston and Matthew Modine.

Here’s a trailer for the film:

Both will go up against a heavy-hitting slate of recent blockbusters, including Men in Black 3 and Marvel’s Avengers.