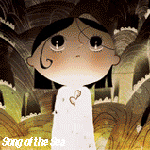 A lot of people sat up and took notice of Ireland’s Cartoon Saloon last year after its animated feature Secret of Kells was nominated for an Oscar.

The studio is now developing a new feature called Song of the Sea, which Cartoon Saloon’s website describes as follows:

“The story of the last Seal Child’s journey home. After their mother’s disappearance, Ben and Saoirse are sent to live with Granny in the city. When they resolve to return to their home by the sea, their journey becomes a race against time as they are drawn into a world Ben knows only from his mother’s folktales. But this is no bedtime story; these fairy folk have been in our world far too long. It soon becomes clear to Ben that Saoirse is the key to their survival.”

You may also like...
Related Topics:Cartoon Saloon, Ireland, Song of the Sea, Tomm Moore