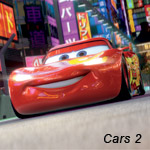 Pixar is ready to race back into theaters this weekend with the release of its long-awaited sequel, Cars 2.

The feature, directed by Pixar and Disney Animation creative chief John Lasseter, is set to roar into more than 4,100 cinemas — many of them in stereoscopic 3D and 3D IMAX.

In case you’ve missed it, here’s the trailer for Cars 2:

Like any Pixar film, Cars 2 is being greeted with plenty of positive reviews. But unlike most Pixar films, there are plenty of counterpoints. Read the positive here, here and here; alternative views can be found here and here.

The Animation Magazine feature story on the making of Cars 2 can be found here: www.animationmagazine.net/features/on-the-autobahn-of-fun/.

A flurry of press has made it hard to miss reading either an interview with Lasseter or a story about the immense marketing push behind the movie.

And don’t forget that showings of Cars 2 include the Toy Story Toon short Hawaiian Vacation, as well as the first teaser trailer for the studio’s much-anticipated summer 2012 release, Brave.

Taking on the Cars 2 onslaught is the raunchy, R-rated comedy Bad Teacher. Starring Cameron Diaz, Jason Segel and Justin Timberlake, the Sony/Columbia release is opening at just over 3,000 theaters.

Here’s the trailer for Bad Teacher:

And the box office race will heat up significantly midweek with the Wednesday release of Transformers: Dark of the Moon in advance of the Independence Day holiday weekend.