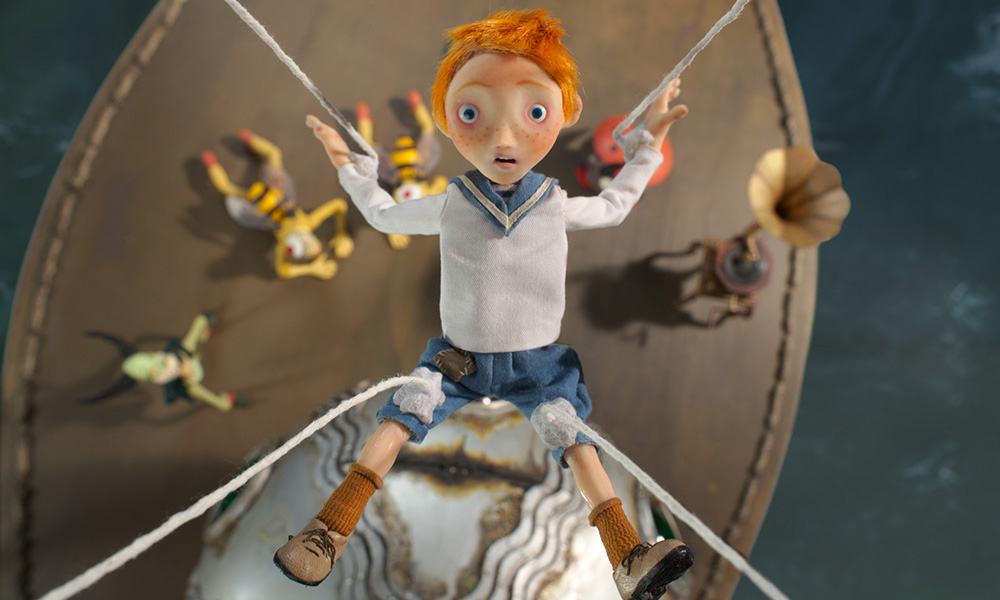 Nothing is quite what it seems in Captain Morten and the Spider Queen, a clever stop-motion movie about the adventures of a young boy and his creature friends.

If you were to mix Henry Selick’s James and the Giant Peach, the works of Czech stop-motion master Jan Svankmajer and an Irish coming of age movie by Neil Jordan, you might get something like Estonian director Kaspar Jancis’s new stop-motion feature Captain Morten and the Spider Queen. In this charming movie, the son of a traveling sailor magically shrinks down in size and meets a variety of bugs when he’s sent to live with his unpleasant aunt one summer. A co-pro between Nukufilm (Estonia), Telegael (Ireland), Grid VFX (Belgium) and Calon (U.K.), the film is getting great buzz and is one of the selected features at the Ottawa Intl. Film Festival this month.

As the film’s director Jancis tells us, it all started with a theater project and a competition featuring seaside stories. “About seven years ago, I was applying for a cultural grant in Tallinn (Estonia), where we had to propose a theatrical piece,” recalls the director. “While waiting for the acceptance of our traveling theatrical project, I told the story to a friend who happens to be the owner of a publishing house. He asked me to write a book about it. I was hesitant at first, but I wrote the story and illustrated it as well. Those illustrations became the first sketches for the movie.”

Jancis gave the book, along with a a musical CD performed by his band Criminal Elephant to Andre Mänd, one of the heads of Tallinn-based Nukufilm, one of the oldest stop-motion studios in northern Europe. “He thought the story would make a great stop-motion movie, and I agreed because the scale differences and the metamorphosis of insects to humans in the story are perfect for this genre,” says Jancis. “I had never done a feature or a stop-motion project before, so it was a great opportunity to try it out.”

After the theatrical project took off, Jancis met up with screenwriter Mike Horelick in Los Angeles to flesh out the movie’s first draft. The film, which had a six million euro budget (about $7 million), began production in 2014, with a voice cast that included Brendan Gleeson, Ciaran Hinds, Pauline McLynn, Michael McElhatton and Susie Power.

Jancis, who is best known for his 2014 2D-animated short Frank and Wendy, says he loves the world of stop-motion. “I like working with small-scale objects and the handicraft behind it,” he notes. “I love to work with light and space. I love how the actors voice meets the work of animator and creates a new unique quality. It was great to explore the possibilities of CG as well.”

One of the team’s main challenges in producing the world of Captain Morten was connecting the stop-motion world with the CG backgrounds. “In the fantasy parts, where the main character is in the size of an insect, we had to create CGI water with objects floating in it,” explains Jancis. “Also, all the objects in the background were computer generated. Matching the CG visuals with the stop-motion look with all the right textures and lighting was the hardest part during the shoot.” 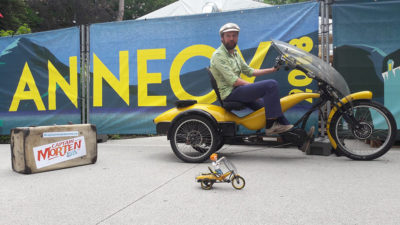 “I like working with small-scale objects and the handicraft behind it. I love to work with light and space. I love how the actors voice meets the work of animator and creates a new unique quality.”
Director Kaspar Jancis

Another key challenge was the fact that four different studios in different countries were involved in the production. “The project is international and there are different ways of understanding how things should be done,” notes the director. “I think that was a big lesson for the future.”

Overall, 40 main puppets were used in the feature. Some of them were made with simple wire armature, but most required more sophisticated silicone and joint armature construction. “Many of the main characters had several identical copies so that our animators wouldn’t have to wait while shooting,” says Jancis. “We had also exchangeable heads for different expressions of the character.”

When asked about the different tools that were used in the production, Jancis responds, “Well, we used screws to connect the puppets to the sets. We had rigs to hold the puppets when they are off the ground or when they were too heavy to stand on their own. There were different tools, too, for cleaning the puppets. But overall, everything was pretty much made by hand, which is why I think stop-motion is the most magical and fun kind of animation.”

The director says he would definitely explore the world of stop-motion again if he comes across the right story that lends itself best to the technique. However, this next project is a 2D-animated short titled Cosmonaut. “I feel that working with space and light has also brought something new into my new 2D short, which will be released next year,” he admits.

Growing up in the Soviet Union, Jancis was exposed to many different types of animation as a young boy. “I liked a lot of Czech animation because they were full of great humor and funny characters,” he recalls. “I also really liked the Pink Panther series. We also had a lot of great Russian animation. There was a series about a wolf and a rabbit called Well, Just You Wait (produced by Soyuzmultfilm), which was kind of like the Soviet version of Tom and Jerry. We also had great animation in Soviet Estonia — Priit Pärn, for example; although he made films for grownups, I really enjoyed them a lot when I was a kid, not knowing that one day I will be his student.”

He is also quite hopeful about the possibilities and amazing growth of animation in the next few years. “Animation is becoming a major part of our visual experience as new generations are consuming it in many ways,” he notes. “It is expanding and growing in many ways. Luckily, a 100-year-old classical format like stop-motion is still alive and standing strong. There are signs that people are still keen to enjoy the finest hand-crafted art on a big screen.”

Jancis also has some helpful tips for those who want to explore the world of animation. “My advice is to go for it and do not retreat when the first difficulties occur,” he says. “Animation is the art of patience. Be open and try to copy from as many different places you can, because that is the foundation of your originality.”

So, what does he hope audiences will take away from the magical adventures of young Morten and his bug-filled universe? “It seems that the story is open to personal interpretations and it’s really interesting to hear what people see in this story,” he admits. “I’m also happy that people see it as something different and something that they have not seen before although there are lots of archetypal ideas. I hope the audience will be entertained and also moved a little bit. I’d also be glad if they have some questions to ask from themselves after they leave the theater.”

Captain Morten and the Spider Queen is co-produced by Estonia’s Nukufilm, Ireland’s Telegael, Belgium’s Grid VFX and the U.K.’s Calon. Germany’s Sola Media has the international rights. The film screens at the Ottawa Intl. Animation Festival in September. 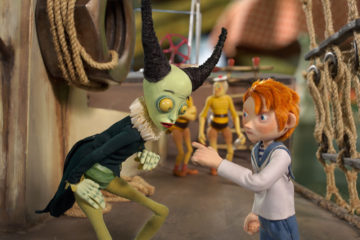 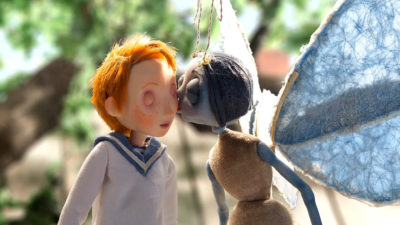 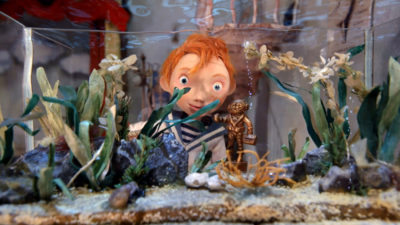 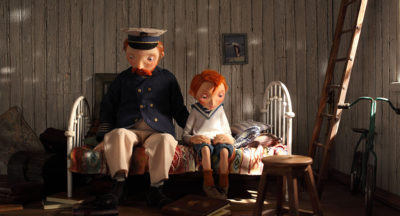 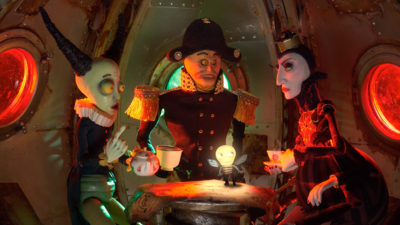 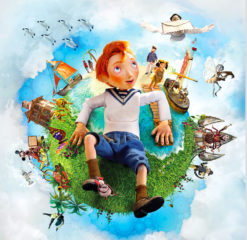 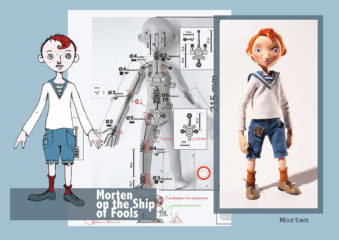 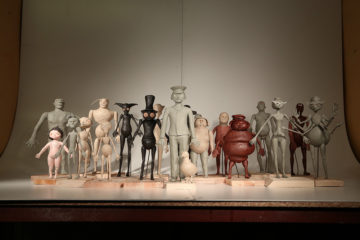 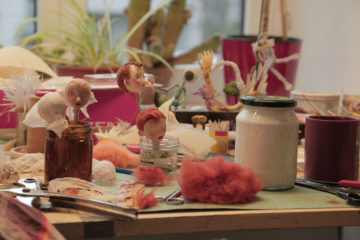