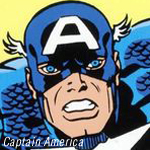 With Comic-Con in full swing, it’s the perfect time for Marvel Studios’ Captain America: The First Avenger to come out ready to take on the hugely successful boy wizard.

Captain America, which stars Chris Evans as the eponymous superhero, hits in some 3,500 theaters – many of them showing the film in stereoscopic 3D. The film, set mostly during World War II, is based on the comic book that was created by Joe Simon and Jack Kirby and first appeared in the nation’s newsstands in early 1941. Distributed by Paramount, the movie features visual effects and previz work from Double Negative, Matte World Digital, Fuel VFX, Luma Pictures, The Senate VFX, Method Studios, Framestore, Lola VFX, Cinesite,  The Third Floor, 4DMax, Hydraulx, Stereo D and The Base Studio.

The only other wide new release this week is the Sony/Screen Gems romantic comedy Friends with Benefits, which opens at  just under 3,000 cinemas.

The most likely battle of the weekend is shaping up between Captain America and the record-setting Harry Potter and the Deathly Hallows, Part 2. The Potter finale continues to do super business as it completes its first week in release, having grossed $214 million domestic as of Wednesday. Foreign grosses stand at $390 million, for a total of just more than $600 million.

Also still in the mix are holdovers such as VFX vehicle Transformers: Dark of the Moon, Disney’s 2D animated feature Winnie the Pooh, Pixar’s Cars 2 and the comedies Horrible Bosses and Zookeeper.

Daredevil Has a What?
‘South Park’ Returns Oct. 5, Renewed Through 2013