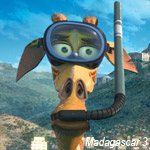 DreamWorks Animation’s summer release Madagascar 3: Europe’s Most Wanted is on track for a world premiere in May at the Cannes Film Festival, according to The Hollywood Reporter.

While only one film has been confirmed for the prestigious annual festival, an announcement is expected in a few days, the trade reported.

DreamWorks took the world premiere of Kung Fu Panda to the festival back in 2008. Other animated films also have played the fest — with Pixar’s Up having opened the festival in 2009.

Madagascar 3: Europe’s Most Wanted is due for general release June 8. It reunites cast members Ben Stiller, Chris Rock, Sacha Baron Cohen and Jada Pinkett Smith, and adds new cast members Frances McDormand, Bryan Cranston, Jessica Chastain and Martin Short. Tom McGrath and Conrad Vernon are directing the movie from a script by Noah Baumbach that sees the former New York Zoo animals travel hit the continent on their way back home from Africa. It will be the first film in the series to be shot and released in stereoscopic 3D.

The first two Madagascar movies have sold more than $1.1 billion in tickets worldwide.