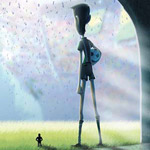 Oscar-winning Argentinean director Juan Jose Campanella (The Secret of Their Eyes) took his latest animated feature, Foosball 3D to the Cannes film market this week. Spain’s Film Factory is handling the feature’s distribution rights. Variety reports that the film is budgeted around $14 million-$15 million and is both written and directed by Campanella. Sergio Pablo (Despicable Me) is the film’s designer and animation supervisor.

The movie is described as a coming of age story about a young boy who decides to save his town by taking on a famous soccer star, aided by foosball figures that come to life. Based on a story by the late Argentinean writer-illustrator Roberto Fonanarrosa, the film is produced by Argentina’s Jempsa, Spain’s Plural-Jempsa an Antena 3 Films. The film’s exec producers are Buenos Aires-based 100 Bares, Gaston Gorali’s Catmandu and Spain’s Gustavo Ferrada. Foosball 3D is slated for a 2012 delivery.