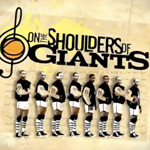 Chicago-based indie studio Calabash Animation recently contributed three key animated sequences to the upcoming documentary On the Shoulders of Giants. The film looks at 1930s-era pioneering basketball team the Harlem Rens and their role in the history of the game. Directed by Deborah Morales, the film premiered in New York, Chicago and Los Angeles and is currently airing on pay-per-view in select markets.

“The producers wanted this film to be graphically strong,” says Sean Henry, exec producer at Calabash Animation. “There is literally no film footage of any of these major championship games, and although their historical importance is significant, they barely got a footnote in the newspapers of the time. Our goal was to provide visuals that would fit the story and the setting and the mood of the film. A large percentage of our time was spent just developing the style of the animation.”

The look Calabash developed has a dynamic, high-end feel, but avoids anything overly cartoony or silly. The style takes a cue from the distinct look of urban artist Justin Bua, who contributed original art to the film. “We weren’t trying to copy him, but be in keeping with his overall sensibility and style,” Calabash animator Eric Meister notes.

For the Calabash creative team, the ultimate challenge was to find a way to depict these games and their intensity through animation. “It is not easy to capture the physical nature and beauty of the game of basketball in animation,” Henry notes. “In the end we decided not to try to perfectly simulate the action of the game, but rather to tell the story with visuals that complimented the narrative.”

Here’s a trailer for the film:

Click here to watch the Calabash animated sequences from the movie:

You may also like...
Related Topics:Calabash Animation, Deborah Morales, Harlem Rens, On the Shoulders of Giants, Sean Henry