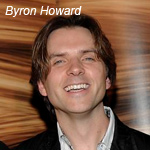 Among the many cool news items revealed by Disney at the D23 Expo was the fact that Tangled and Bolt director Byron Howard’s next project is animalcentric CG-animated feature called Zootopia. Howard, who is a big fan of movies about animals dressed as humans (he says Disney’s Robin Hood is one of his big influences) introduced his 2016 along with writer Jared Bush (All of Us TV series) at the Expo.

The buddy action movie is set in a fantastic animal world in which the anthropomorphic characters live in a cosmopolitan city, which has animals like rabbits, foxes and wildebeest existing in separated urban communities, designed to reflect their natural habitats in the world. For example, Tundratown features ice taxis made of Zambonis and there’s a Busted Tusk karaoke bar where the animals can go after work to let their fur down! And business types read The Wall Street Gerbil!

The film explores the unlikely friendship between the fox Nick Wilde and the bunny Judy Hopps. Judging from the fantastic art the creators shared with the audience, this inspired journey is going to be one heck of a ride.

Here’s the official synopsis: “In the animal city of Zootopia, a fast-talking fox who’s trying to make it big goes on the run when he’s framed for a crime he didn’t commit. Zootopia’s top cop, a self-righteous rabbit, is hot on his tail, but when both become targets of a conspiracy, they’re forced to team up and discover even natural enemies can become best friends.”

D23 Expo: More on Pixar’s ‘Good Dinosaur’, ‘Inside Out’
Must-Sees of SIGGRAPH