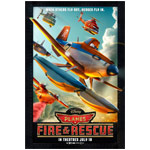 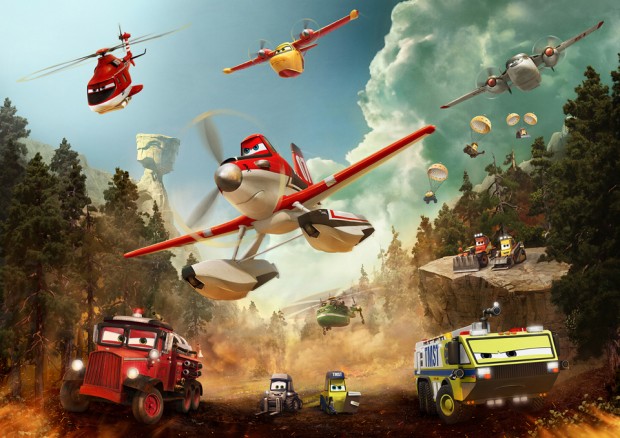 DisneyToons does its homework to make Planes: Fire & Rescue a movie worthy of firefighters’ courage.

Fighting fires is serious business for the brave men and women who are out there every day in the thick of it, and honoring their skill and courage with a tale both emotional and factual was the top order for the crew of Planes: Fire & Rescue.

The CGI-animated feature from DisneyToon Studios was conceived from the ground up as a movie that would be worthy of its subject matter and the studio’s plans for it as a mid-summer release, due July 18 in theaters in stereoscopic 3-D.

Planes: Fire & Rescue picks up where last year’s racing comedy Planes left off. Now a champion racer, Dusty Crophopper (voiced by Dane Cook) learns racing has damaged his engine, which cannot be replaced. When a mishap at Propwash Junction leaves it without fire protection, Dusty steps in and heads up to get certified with the air attack team at Piston Peak National Park. There, under the tutelage of Blade Ranger (Ed Harris), Dusty finds renewed purpose as he takes on the very difficult task of learning to fight fires in the park on a daily basis.

The film also features the voices of Julie Bowen as Li’l Dipper, Curtis Armstrong as Maru, John Michael Higgins as Cad, Hal Holbrook as Mayday, Wes Studi as Windlifter, Regina King as Dynamite and the real-life couple Jerry Stiller and Anne Meara as Harvey and Winnie.

Studio veteran Bobs Gannaway directed and co-wrote with Jeff Howard the feature, which — despite the first Planes having only been released last year — has been in the works since 2010, one year after work began on the first film.

Bring on the Consultants

But unlike Planes, which began production as a direct-to-video feature, Planes: Fire & Rescue was designed from the ground up to be a theatrical release and took a meticulous approach to getting all the details just right. The film hired more than 100 consultants, from the pilots of CalFire, who fight fires on a daily basis, to master helicopter pilot Chuck Aaron, who reviewed all the helicopter flight scenes for accuracy.

But it was finding an emotional entry point that was the most difficult and essential nut to crack. Gannaway recalls an early table read that clarified the story’s problems and lead him to ask the questions that lead to solutions.

“I thought, if Dusty can’t race again what would he do, how does he deal with that?” says Gannaway. “We went in and started investigating engine problems and started thinking about internally how Dusty could be dealing with that, and it ended up creating a more complex story because that’s the internal issue with Dusty while he’s dealing with this external problem.”

A little more research found the way to bridge the two worlds, Gannaway says. Most of the planes used to fight fires were built and used for another purpose first, making firefighting a sort of “second career” for many types of planes. Plus, a crop duster plane like Dusty was the first plane modified to fight fires from the air.

Throw in the drama that comes from there being more than 50,000 wildfires a year in the United States — the film points out that only the big ones get attention — there was plenty of dramatic material to mine that would complicate and deepen the entire world of Planes.

Bringing it to life was no small challenge with the animators having only inanimate objects as characters and creative limits imposed by the decision to make the vehicles as realistic as possible. Wood needed to behave like wood; metal like metal; glass like glass — and exceptions were rarely allowed.

“One of the difficult things to get the animators to believe in was that these are vehicles that talk; they’re not creatures that you’re posing out,” says animation supervisor Ethan Hurd. “We could do that — we could lift them up, have them gesture like humans, walk around like humans — and I’ve seen tests of that, and they just look like four-legged creatures, like it’s a brand-new, weird four-legged creature; it’s no longer a vehicle.”

“Those limitations become your strengths,” says Gannaway. “The rigidity of the wings is what makes the film feel real. Now, from an animation standpoint, that leaves you somewhat reliant on the eyes and face for a lot of the emotion, but also the way that aircraft tilt and lean, so you get a lot more posing out of the characters than you might expect.”

There were a number of scenes in the film that excelled in the subtlety of the animation, which Hurd attributes to the talents of his crew of about 60 animators who worked nine months on the movie. “There’s less controls [on these characters], which makes it easier to animate, but a good animator can do well with limited controls and a bad animator can still do poorly with unlimited controls, so the basic principals still apply,” he says.

The film’s ambition is on display early on in a mostly silent scene in which Dusty tries to approach elderly fire engine Mayday, who has just been relieved of his duties. Shot from behind, Mayday’s face cannot be seen, but the character’s sorrow manages to come through in the body language.

The fire and the accompanying smoke was handled by the visual effects crew on the movie. Gannaway says two and a half years were spent on developing a fire system for the movie that could create a library of fire effects for use in the mid-ground and background of shots, and custom fire for more prominent uses.

All of the effects work required the effects stage to be moved up in the pipeline to handle the 662 effects shots out of a total 1,224 in the film.

As in Planes and the Cars films, the setting of Planes: Fire & Rescue is a stylized and altered version of real-world places. Art director Toby Wilson says he did extensive research into national parks to create Piston Peak National Park, which covers 20 square miles and includes some 2.5 million trees. He says he drew elements from Yellowstone, Yosemite, Arches and Sequoia national parks, adding in subtle mechanized elements to the foliage and the design of the park’s Grand Fusel Lodge.

The lodge design also incorporated Native American elements, which play a key role in the film with fire-fighting tanker Windlifter being of Cherokee descent and the character delivering a key plot point via an ancient Native American myth.

It’s far from all gloom and doom, however. One of the funniest moments in the film comes when Dusty learns Blade Ranger was a former actor on a series titled CHoPs — a helicopter version of the 1977-1983 TV series CHiPs — and features a shot-for-shot parody of the classic show’s opening credits and guest voice by Erik Estrada.

Producer Ferrell Barron says he pitched the idea for Blade because he wanted the film to feature a different kind of mentor than seen in Cars or the first Planes. The idea was for Blade to have been unable to save his partner on the show during a stunt gone wrong because he wasn’t a real, trained rescue vehicle, prompting a career change to firefighting. “I definitely didn’t want to have a broken mentor, I wanted a fully realized character,” he says. “Dusty doesn’t need to heal Blade, Blade has come to terms with the tragic event in his life, and he’s moved on and can give that wisdom to Dusty.”

As the film approaches release, Gannaway says he is most pleased that the real firefighters who have seen the film were pleased with what they’ve seen. “You just want to do right by them,” he says.