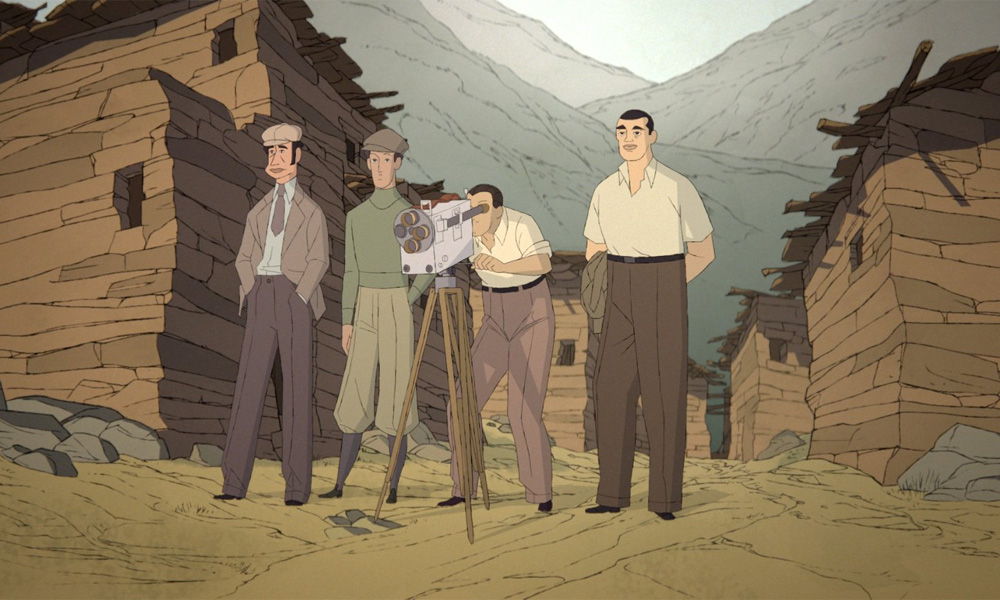 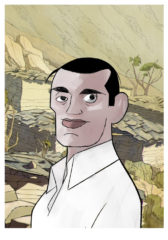 Imagine a movie that proposes to explore, through sometimes disturbing imagery, the troubled psyche of a world-famous filmmaker who is seeking to expose the deplorable living conditions of a tiny Spanish hamlet, where the people are undernourished, illiterate, inbred, and lacking the knowhow even to make bread.

That was the task set out for Spanish director Salvador Simó in creating Buñuel in the Labyrinth of the Turtles, ostensibly about the making of surrealist Luis Buñuel’s now-legendary, once-banned 1933 documentary Las Hurdes: Tierra Sin Pan (Land Without Bread). Buñuel (1900-1983) was drawn to the paradox of how a community located only a day’s drive away from Spain’s capital of Madrid could exist in such dire poverty and ignorance. Footage from the original documentary is intercut with the animation to demonstrate how the filmmaker, who became personally torn by the desire to present both the real and the surreal, sometimes heightened reality for dramatic effect, despite the consequences.

Buñuel in the Labyrinth of the Turtles is not designed to be a biopic, however; rather it is a dramatization of a transitional moment in his life. And it is certainly not designed to be a cartoon. “We look at this film not as an animated film, we look at is as a film,” says Simó, whose credits include work in America with Bill Melendez Productions, a stint with Disney’s Paris studio, visual effects work at MPC London, and the Spanish animated movies El Cid: The Legend and Midsummer Dream. “Animation gives a different way to approach a film.” This approach fit perfectly with the film’s world premiere venue, the Animation Is Film festival in Los Angeles last October, where is received the Special Jury Prize.

Using traditional rather than digital animation also allowed Simó — who co-wrote the script with Eligio R. Montero in addition to directing — and producer Manuel Cristóbal to make the absolute most out of a $2.1 million budget. “2D animation now is more economical and easy to do, because 3D involves so much, and it also gives more plasticity,” he says.

Buñuel in the Labyrinth of the Turtles (the title, incidentally, is not meant to be surreal; it is instead a simile for the cramped, remote village in the Las Hurdes region of Spain whose stone roofs resemble turtle shells) is based on the graphic novel by Fermin Solís. It presents a chapter in young Luis Buñuel’s life in which he was struggling to emerge out of the shadow of artist Salvador Dalí, with whom he had made the surrealist films Un Chien Andalou (1928) and L’Age d’Or (1930), the latter of which was so scandalous it rendered him unemployable.

Plagued by nightmares (including one featuring gigantic, stilted elephants) and haunted by memories of his relationship with his elderly, strict father, the director is attempting to reclaim his life and career. This is despite his worst inclinations, which drive him to challenge authority, even that represented by his close friend and de facto producer Ramón Acín (another notable figure), whose lottery winnings provided the financing for the documentary. 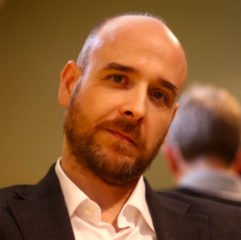 The film is as much about the personal struggle between these two compatriots as it is about the making of a film-within-a-film. “My favorite sequence is the first time we see Luis with Ramón because that moment needed to feel homey, and we did not want to overwork the dialogue,” Simó says. “We said as much as we could with images, which was a huge challenge for the animation, the acting. It was a woman, Giulia Landi, the supervising animator for Submarine, who did that whole sequence, and I think it was done brilliantly.”

Amsterdam-based Submarine was one of the studios employed to animate the film, along with Spanish studios The Glow, Sygnatia and Hampa. Freelance artists from all over, including Colombia and the United States, also contributed. “It was a matter of having a balance between senior professionals and giving opportunities to many junior professionals,” says Manuel Cristóbal. “When you have interesting projects you attract interesting people, and if you are honest and say this is a very competitive budget, [you say] we can do this if you will join us. Spain is a very competitive country.”

As director, Simó worked closely with art director José Luis Ágreda to find a rough, naturalistic look for the film, both for the settings and the animation. “We didn’t want squash-and-stretch, we wanted real acting,” he says. “We didn’t want to have the film smooth, so we were trying to give the graphics of the film some roughness.”

Key to this effect was animating on threes. “When I was working with Manolo Galiana, the animation director, he was doing some rough things and some tests, and I said, ‘Just leave it like this, don’t even inbetween,’” Simó says. “He was like, ‘No, no, no, we have to inbetween this!’ But it was so expressive. What is important in acting is not that the character is moving, because the audience cannot look at the expression of the character while he is moving. You have to keep the character still and let the audience read what the character is thinking.”

This is most effectively played in the final confrontation scene between Ramón and Luis, in which Acín angrily upbraids his director for acting irresponsibly, even insanely. “[The character of] Ramón is working a lot and being really expressive, and the reaction of Luis is just one drawing,” Simó notes.

Voice recording sessions were handled in an unconventional fashion as well. Instead of recording the script line-by-line, Simó gathered his actors and instructed them to play the scene as though on stage, while a boom mic recorded the lines.

“It gave a lot more reality to the action,” he states. “It made it more natural, and that was exactly what we were trying to do, have more natural feeling. Also, it gives the animators strong tools to work with.” Some characters speak in Spanish and French, reflecting the fact that Buñuel lived in both places at various times. Simó goes on to say that many of the actors were cast because they were from the same region as the characters they were playing, and thus could provide the proper regional dialect. (The director himself is briefly heard as Salvador Dalí.)

The film’s haunting musical score is the work of composer Arturo Cardelús, whose stated goal for one particular scene was to move the audience to tears. It is a crucial acting sequence in which Buñuel and his tiny film crew visit a crowded school in the Las Hurdes village (in real life, the hamlet’s main source of income came through a government subsidy for taking in orphans), and is swarmed by the children who beg for affection.

In the context of the story it is the moment Luis’s rebellious artistic intellect begins to succumb to human emotion. Cardelús also found another way to further stretch the film’s meager budget by contacting a friend at London’s Royal Academy of Music, where Cardelús is an Associate, and asking that a choral work of his to be included in that semester’s curriculum. After months of rehearsing (for free), the students went to Abbey Road Studios and recorded the piece within an hour. “They were 19, 20, and they were all so excited,” Cardelús says. “It was a win-win.”

One controversial element of the film could not be ignored: the images of animal deaths, often at the hands of Buñuel himself, which are represented in both the live-action clips of Las Hurdes and in the animation. While difficult to watch, these sequences seek to offer insight into why the director did what he did. “The message we wanted to tell the audience is that this actually happened, it’s not something we invented,” Simó says. “I would like people to think about it, but we worry about animals, and maybe we should be more worried about what’s happening with ourselves.”

While the film is slated for release in Europe in the spring of 2019, no concrete plans have been made for U.S. distribution. Salvador Simó, meanwhile, wants audiences to see the film as the story of an historic friendship presented through animation (and an ending title card explains that Ramón Acín was executed as an anarchist in 1939 by Spain’s new fascist government), and the personal turning point for a key 20th century cinema artist.

“Everything changed for him after Las Hurdes,” Simó says. “He found his own voice. All his later films were extremely human. We say that we made this film about Luis, not about Buñuel.”

You may also like...
Related Topics:Buñuel in the Labyrinth of the Turtles, featured