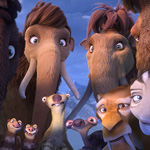 Editor’s Note: An earlier version of this story incorrectly identified Adam DeVine and producer Lori Forte. This is the corrected version. Animation Magazine regrets the error.

For a film series set during a lost geological era and starring several characters based on long-extinct species, Blue Sky Studios’ Ice Age has proven a remarkably long-lived film series as it returns to theaters July 22 with its fifth entry, Ice Age: Collision Course.

This entry sees the original trio of characters — Manny the woolly mammoth (Ray Romano), Sid the ground sloth (John Leguizamo) and Diego the saber-toothed Tiger (Denis Leary) — have to save the world when the saber-toothed squirrel Scrat has a misadventure with a frozen UFO that sends a giant asteroid hurtling toward Earth. The ever-growing cast is joined by Modern Family star Jesse Tyler Ferguson as Shangri Lama; Modern Family and Workaholics star Adam DeVine as Julian, fiancé to Manny’s daughter, Peaches; English singer Jessie J as Sid’s new love interest, Brooke; and astrophysicist Neil deGrasse Tyson as a version of himself, Neil deBuck Weasel.

With the last two films in the series having each grossed north of $850 million worldwide, Ice Age’s status as an ongoing series seems assured, even though that’s not how the creative side approaches each new entry.

“When we finished three — that’s when I started co-directing — and again after four, it was like wow, I guess the audience is there,” says Mike Thurmeier, co-director on the third feature, Dawn of the Dinosaurs, and director of 2012’s Continental Drift and, now, Collision Course. “They’re going to the films, so it seems like we should probably do another one. People seem to like it.”

Lori Forte, producer on each film in the series from its start, says there are plenty of ideas for more movies, but the studio takes each movie one at a time.

“I know that if there’s another one — or a last one — I know what I would do. I know the stories I want to tell,” she says. “But if there wasn’t, if there wasn’t a story worth telling, or that we felt was worthy of the characters, we probably would just not do it. I think there’s still more stories to tell if the audience wants to see them. But we’ll know after this movie comes out if they want to or not.”

Thurmeier says focusing on making each movie without thinking about it as a episode of a bigger series is a strength of the series. “The way that the films have been made with the hook of The Meltdown or the Jules Verne-ish dinosaur Center of the Earth story, there’s a quirky fun layer to it that I think you wouldn’t necessarily have if you thought, I’ve got to wrap up the whole franchise.”

AWOL in a UFO

That said, the plot of Collision Course takes a turn out of a moment in the first Ice Age, in which the characters walk through an ice cavern and see a flying saucer frozen in the wall. “It was sort of a non sequitur — it was kind of funny, it was kind of quirky,” Forte says. “We thought at that time that there’s something there … so when I was thinking about ideas for this movie, it was just, this is the time to tell that story.”

So the film begins with Scrat, the frantic dialog-less acorn protector, finding the space ship, accidentally activating it and launching into outer space. A whole new level of Scrat antics well known to viewers of the series follows, with the result being that a huge asteroid’s course has been diverted directly toward Earth. This marked a bit of a departure for the series, which has typically kept Scrat involved in his own parallel storyline instead of being directly involved in the main plot.

“We feel it connected the whole franchise with the first movie and grounded it a bit more,” says Forte. “We’ve already set it up … so it didn’t seem like a far cry to get him up there. But the fact is we can do that with Scrat; we would never send our guys, Manny, Sid and Diego up there.”

From that original idea, Forte oversees a writing process that runs through the entire production schedule, with many writers contributing at various points, from breaking big plot points through fine-tuning individual lines.

“It’s a constant sort of process,” she says. “It’s really nice to have a lot of time to do that and be able to tell a story a little better than you would if you only had three months to do it.”

Thurmeier and his co-director, Galen T. Chu, begin storyboarding while the writing was in progress, saying the two disciplines feed into and play off each other’s strengths. “We all respond to it and sculpt it along the way, so it’s a continual back and forth and evolution that doesn’t end until really late in the process.”

As with any ongoing series, there’s a need to stay true to the original while evolving into something new at the same time. “We have more tools at our disposal, so things have gotten a little more advanced, but we try and keep the style,” says Thurmeier, saying the series has become more fast-paced as it adds new characters and storytelling trends change.

Each film also added characters to the cast, with the major additions working because they advance the evolution of the main characters, such as finding significant others or having children. But at the same time, it becomes a major challenge to find screen time for both the lead characters and the growing supporting cast.

“You do have to pick and choose who is rising to the top and who is more supportive,” says Thurmeier.

“We came up with the pinks and purples to represent space,” says Thurmeier. “We thought, this is about that coming down to our world, to the Ice Age world, so we found a way to get those cosmic colors down into the ice age and that was a new flavor that was interesting.”

The Ice Age series has done extremely well overseas — the last movie earned more than 80 percent of its box office in foreign markets — a phenomenon Forte and Thurmeier attribute to the universality of the stories more than any specific effort to be global.

“The asteroid is going to hit anywhere on Earth; it’s pretty much a global thing,” says Forte.

“The stylings of the comedy play in a Chaplin-esque, Buster Keaton kind of way — especially the Scrat stuff — so it feels like it’s funny to everybody,” says Thurmeier.