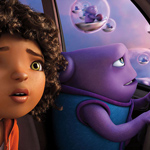 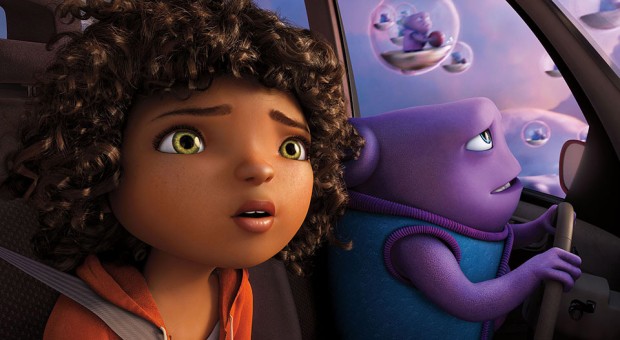 DreamWorks Animation veteran Tim Johnson says his path to directing the studio’s new film, Home, began — where else? — at home.

Johnson had picked up a copy of Adam Rex’s novel The True Meaning of Smekday after reading a positive review of it in The New York Times. He started reading it to his kids, but continued on to the end after they had gone to bed.

“The moment I said ‘Wow!’ was a scene midway through the book — and we have a version of it midway through the movie — where this arrogant alien turns to the young girl and says, ‘I think I am owing sorries to you,’ and he apologizes for the invasion,” says Johnson. “And she says, ‘Don’t call me Gratuity anymore, call me Tip.’ That scene in the book made me choke up.”

As soon as he finished reading the book, Johnson emailed DreamWorks Animation chief Jeffrey Katzenberg at 2 a.m. saying the studio had to make Smekday into a movie.

The end result is Home, which hit theaters March 27 and is looking to be the big box office hit DreamWorks Animation has been seeking for a while.

Home begins with the alien race called the Boov, which considers cowardice a positive trait and therefore takes over Earth as peacefully as possible. They relocate all humans safely to Australia, and hope to evade their galactic enemies, the Gorg on their new home planet.

All goes according to plan until a misfit Boov named Oh accidentally invites the entire galaxy — including the Gorg — to his housewarming party. On the run from his own race, Oh runs into a young girl named Gratuity “Tip” Tucci, who is the only human to have escaped the Boov’s relocation and just wants to find her mother. Together, Oh and Tip form a tenuous partnership that takes them around the world to a final confrontation with the Boov and the Gorg.

The feature is DreamWorks Animation’s sole feature film release for 2015 after recent shakeups at the studio that shuffled its release schedule and included cutbacks. Johnson directs from a script by Tom J. Astle and Matt Ember. Suzanne Buirgy and Mireille Soria, a veteran of the Madagascar franchise and the studio’s recently promoted co-president of feature animation, produced Home. Jim Parsons, the Emmy-winning star of the CBS comedy The Big Bang Theory, voices Oh, while international music star Rihanna voices Tip. Rounding out the cast is comedy legend Steve Martin as Captain Smek, leader of the Boov.

Johnson’s early-morning email to Katzenberg led the studio to option the film rights to Rex’s book, and Johnson began to develop the project with Emil Mitev, who became art director on the movie.

One thing Johnson was especially interested in was finding a fresh look for the genre. “As a lover of science fiction, I wanted to make sure our movie didn’t have laser blasters and space ships that looked just like every other science-fiction movie,” he says.

Beginning with the art in Rex’s book, Johnson found inspiration on a trip to Comic-Con in San Diego, where he bought some pop vinyl toys from Asia. “I bought a bunch of them and really kind of was moved to create the same sort of tactile, adorable quality (in the movie that) I saw in a lot of collectible vinyl toys,” he says.

Adapting the story also had its challenges, especially since the novel is told in the form of an essay Tip writes to be put in a time capsule and opened a hundred years in the future. Writers Astle and Ember had extensive credits writing and producing TV comedies before teaming up to write the feature film comedies Failure to Launch and Get Smart, as well as Blue Sky Studios’ Epic.

“One of the first big breakthroughs was realizing the entire book takes place in the U.S., and it somewhat limits the scope of what is a worldwide alien invasion,” Johnson says. “The idea that we would take this around-the-world journey was very much imposed upon the book, and it was one of the important things in getting it to screen, too. I think Jeffrey Katzenberg and (former DreamWorks chief creative officer) Bill Damaschke all said it makes more sense for us to make a movie for a global marketplace that takes place on a global scale.”

Coming up with an appealing character design for Oh, as well as the idea of having Rihanna come on to voice Tip and contribute to the soundtrack, earned the movie a green light. “When we decided to use Rihanna to voice Tip, everybody said, ‘Well, that’s a big idea. What if we also asked her to curate the music, to work with us on the music?’ Then it was, OK, now we’ve got all these different sort of energies: beautiful storytelling, unique science-fiction sets, really appealing characters, a global appeal and then somebody to help us make it an event with the fantastic addition of her music.”

In the book, Oh’s character names himself J.Lo, after musician and actress Jennifer Lopez. Having worked with the real Lopez on Antz, Johnson cast her as Tip’s mother and says she was into the idea the alien would be named after her. But other concerns involving confusion of trademarks and licensing prompted the filmmakers to rename their alien Oh.

Though the idea of contacting Rihanna came first, Parsons was the first voice cast for for the movie. “Jim can handle difficult text,” says Johnson. “If you try to read it yourself, you’ll see how hard it is. Plus, he has this charisma that allows you to forgive the arrogance of the character.”

Together, Parsons and Rihanna had the kind of high-quality chemistry needed to tell a road-trip story in which their characters would spend a lot of time talking to each other. “The chemistry has to be very rich and we don’t have the easy chemistry of a sexual relationship,” says Johnson.

Though Tip certainly breaks some ground as a female, non-white lead character for an animated film, Soria says she hopes audiences see the reality in her and accept her as a character.

“She’s untypical, but she’s incredibly typical. She’s typical in life,” says Soria. “She looks more like most of us, so I hope she’s embraced.”