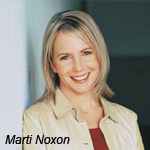 Buffy the Vampire Slayer writer Marti Noxon has joined Pixar to work on an unspecified project. Pixar’s senior development exec Mary Coleman made the announcement at this week’s Austin Film Festival. Noxon, who has an impressive list of TV credits, including Angel, Brothers and Sisters, Grey’s Anatomy, Mad Men and Glee and movies such as the 2011 remake of Fright Night and I Am Number Four.

Several entertainment sites pointed out that Noxon is a refreshing addition to the Pixar creative brain trust, which received some negative press after its dismissal of Brave’s original director Brenda Chapman with Mark Andrews. It’s unclear which upcoming Pixar project Noxon will be working on. The studio has several features in the development, including an untitled pic set for a Thanksgiving 2015 release, as well as Dia de los Muertos and the Trip Inside the Mind (working title), which has Michael Arndt (Toy Story 3) attached.