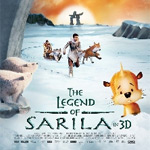 The 3-D animated feature The Legend of Sarila succeeds in telling an original story featuring Canada’s under-represented Inuit people and their culture.

It’s not every day that audiences are treated to a major stereoscopic 3-D, CG-animated feature showcasing vibrant Inuit characters, set in the far Northern regions of Canada. Thanks to the hard work and talents of director Nancy Florence Savard’s 10th Ave. Productions and exec producer Marie-Claude Beauchamp and her team at CarpeDiem Film & TV, the new feature The Legend of Sarila manages to push the envelope and travel to some unchartered territories as it opens in select territories in 2013.

Paying close attention to details and depicting Inuit traditions and cultures with genuine authenticity, The Legend of Sarila tells the story of three young Inuit characters (Markussi, Apik and Poutulik) who embark on a perilous journey to find a promised land that will save their village from famine. Little do they know that it’s their own tribe’s shaman Croolik (voiced by Christopher Plummer) who has caused the disappearance of all the animals from their land.

The script by Pierre Tremblay, who has lived in the Arctic and is quite familiar with Inuit culture, and co-writer Roger Harvey, the 81-minute feature has had an interesting and long journey to big screen as well. 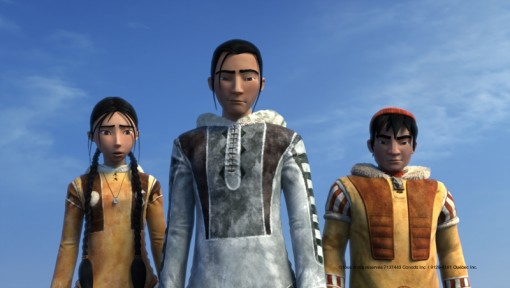 As Savard recalls, the original script for the movie came to her attention back in 2001.

“It was set in the Great North and followed these wonderful Inuit characters on an exciting journey,” says the Montreal-based director. “Our artistic director Philippe Arsenault Bussieres came up with great designs based on original art and iconography from the traditional Inuit mythology. We knew we wanted to make this movie because it was something that we hadn’t seen in animation before.”

Before long, the project attracted the interest of Beauchamp and Edward Noeltner and his L.A.-based Cinema Management Group (Khumba, Saving Santa). The vicissitudes of taxes and multi-national financing brought in the participation of French, English and Mexican co-producers at various times in the development process. However, in the final run, the movie was eventually produced through 100 percent Canadian financing—which was a combination of funding from private investors, government tax credits and grants from Telefilm Canada and Sodexo. 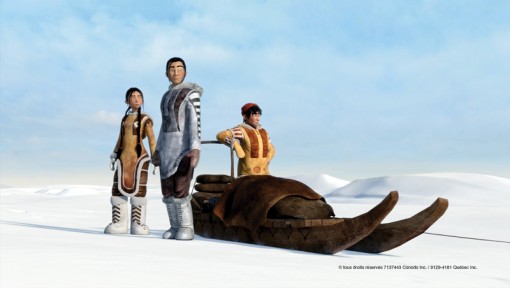 Savard points out that in the early stages of the production, the producers didn’t plan to deliver the project in stereo 3-D, but as time went on, the tools of the trade became cheaper and easier to afford.

“The movie has fire, ice, snow, storms, avalanches, these Inuit spirits flying around and animals swimming—we were able to do the animation in 3-D in 2011,” says Savard. Beauchamp adds that a sizeable capital investment from Montreal’s vfx house Modus FX also helped the filmmakers achieve their goals.

The movie’s pre-production team worked with Toon Boom’s popular Storyboard Pro software to prepare the animatics and deliver the best performances possible for the project. 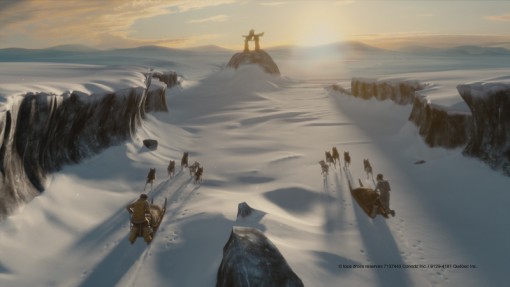 “Toon Boom was thrilled to work with a Quebec production company on such a high-scale 3-D project and see our Emmy-winning technology put to great use,” says Joan Vogelsang, Toon Boom’s president. “The Legend of Sarila is a great testament of the amazing quality that can be produced in Quebec.”

Beauchamp says she is especially impressed with the way the animation team was able to take Bussieres’ evocative concept artworks, which were done in watercolor, and translate them into the animation, using top-of-the-line CG tools such as Autodesk’s Softimage|XSI and Pixologic’s digital sculpting tool ZBrush).

“Philippe’s original watercolor drawings had a certain warmth that our artists had to reinterpret in 3D,” notes the producer, whose credits include the TV series My Life Me and Silly Bitty Bunny and the upcoming feature Louis La Chance. “We didn’t take the hyper-realistic approach for the film’s visuals because we didn’t want it to be cold, especially since the movie is set in this cold, ice-filled environment.” 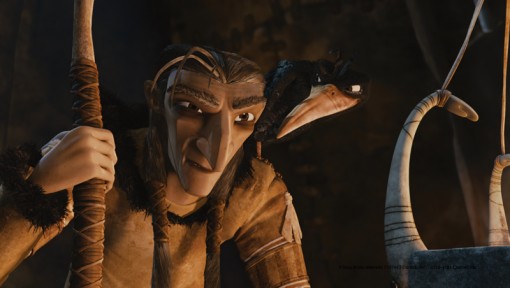 This approach becomes even more intriguing when the film’s characters visit the promised land of Sarila, which is a lush world, filled with flowers and fruit.

“When the characters reach this magical world, we wanted it to be a larger-than-life version of the world that they live in,” adds Beauchamp. “Legends are inspired by reality, so the fruits, the flowers and the game were more luxurious than their world, but they are grounded in what exists in reality.”

Savard says she’s fond of the film’s well-rounded characters and the way her voice cast—which includes top talent such as Christopher Plummer, Genevieve Bujold and Rachelle Lefevre in the English-language version—brings them to life. She is also thrilled with the film’s musical contribution by Inuit singer, documentarian and activist Elisapie, who also voices the character of Sedna, the mythological Inuit goddess of the sea. 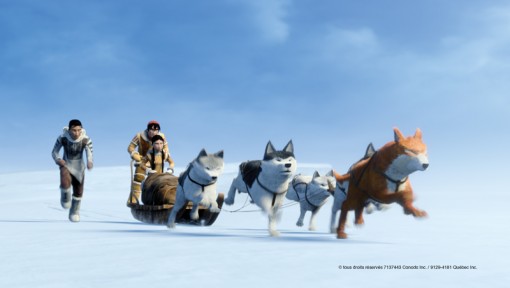 “One of the most amazing aspects of the project was the response that we were getting from the Inuit community,” notes Beauchamp. “We were getting passionate notes and letters from them, asking to have our film screened at schools and libraries. They see so little representations of their culture in regular TV and movies, and they are very excited about Sarila, which is an homage to their heritage and traditions.”

According to the producers, the film has performed well during its first month of release in both French and English-speaking Canada. The pic garnered positive reviews and was also selected as the opening movie at the Toronto International Film Festival Kids event in April.

“We were all very respectful of the culture and legends that inspired the movie,” says Savard. “That’s why it was even more rewarding to see how young children in focus groups and early screenings were responding to what they saw. We originally thought that our movie targeted five to nine year olds, but at screenings, kids from three to 16 seemed to enjoy the adventure and learn about the Great North.” 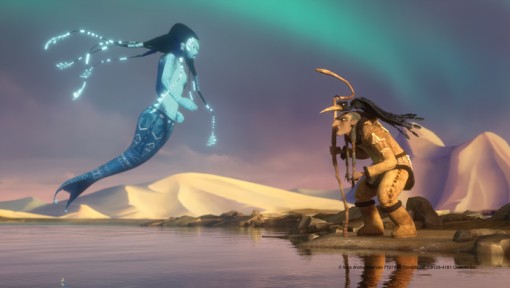 Beauchamp said she’s also quite impressed with the international appeal of the movie.

“To have this movie that was made regionally and is the first stereoscopic 3-D animated feature produced completely in Canada appeal to such a large audience is quite satisfying,” she says. “We didn’t farm out any of the work, and Nancy was able to follow the project every step along the way—we looked at it as taking a true craftsman approach. Now the film has been sold to more than 22 countries. One of the buyers even dubbed it, ‘Pocahontas on Ice,’ which we thought was very funny.”

Now that the movie is findings its way to theaters around the world, both the producer and the director have learned many lessons from the experience. Beauchamp says she now knows that a CG-animated feature as complex and involving as Sarila will require most of your attention, all the time. 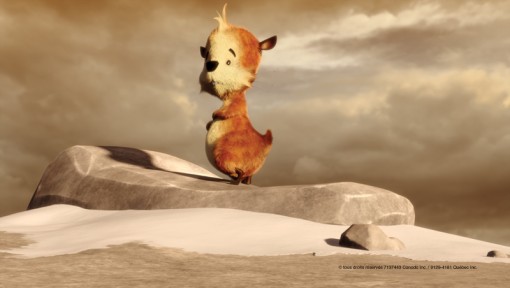 “I had worked on animated movies and TV series before, but before his movie, I thought I could also focus on other projects as well,” says Beauchamp with a laugh. “But I have to tell you, for the past few years, my life was pretty much devoted to this film. It was non-stop involvement. I underestimated how all-encompassing it all was.”

Beauchamp admits that she also didn’t realize how much work remained after the film was done and ready to screen.

“Now I know to prepare for the six-month period after the delivery,” she points out. “You really have to support the project and devote your time and energy to the marketing and use all the ancillary activities—the picture books, the novel, the interactive e-books, the video, apps, etc.—to market the movie. For TV projects, you give up all those rights and activities to the broadcasters, but for a movie like this, you retain all the ancillary and peripheral rights—which is a good thing!” 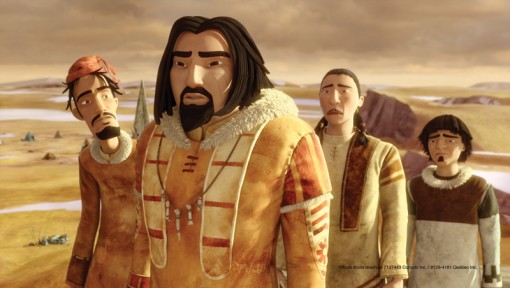 The filmmakers are also hoping that The Legend of Sarila will pave the way for more indie animators hoping to tell different types of stories. As Beauchamp explains…

“There is more than one way to produce an animated feature film today. Americans are continuing to do well with the kind of movies they’ve created over the past few decades. I can’t say that I’m not jealous of their budgets, but I do believe that it’s possible to come out of the shadow of our neighbors in the south. We didn’t want to do an American film—there are other stories and styles of animation that can be explored, and I think that’s why movies like this will thrive.”

For Savard, it’s also about exploring the roads less traveled. 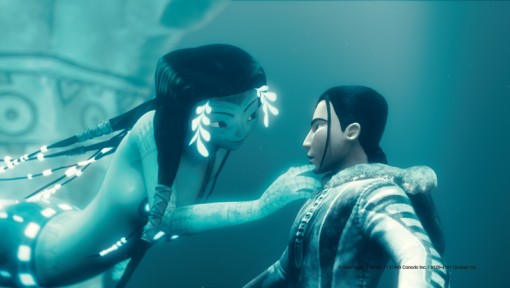 “When you look at the flavor and style of the movie, you know that it’s something entirely different. When we see the reaction of audiences to Sarila and how they respond to the characters in the movie, it’s proof that there is a time and place for movies that explore different cultures and ancient legends. Both kids and their parents want to see things that are different from what they’ve seen many times before.”

If you’re at the Cannes market, you can learn more about the movie by visiting the CMG office, located at the Palais des festivals, Lerins S15. The Legend of Sarila will screen on Friday, May 17 at noon and Sunday, May 19 at 4 p.m. at Lerins 2. For more info, visit www.thelegendofsarila.com. 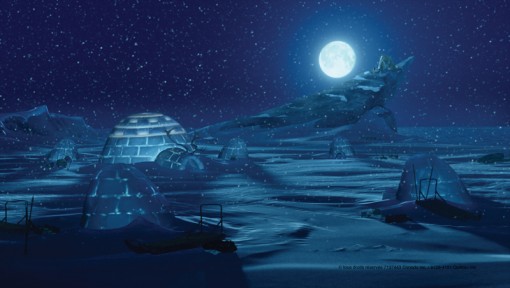