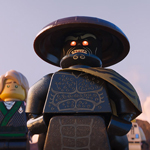 Animators use new and old techniques to get mini figures to jump, kick, punch and spin their way through The LEGO Ninjago Movie.

With the global success of The LEGO Movie and The LEGO Batman Movie, the Denmark-based toy brick empire and its filmmaking collaborators at Warner Bros. decided to add martial arts to its movie mix with The LEGO Ninjago Movie which opened last month in theaters nationwide.

Based on the hit TV series (and toy line, of course), The LEGO Ninjago Movie tells the tale of a group of young ninja warriors who defend the island city of Ninjago from the power-hungry would-be conquerer Lord Garmadon. But there’s a twist — the most popular and talented of the ninja is secretly Garmadon’s son, Lloyd, for whom his father is a huge embarrassment and disappointment. When the ninja unleash the Ultimate Weapon in battle, they and Lord Garmadon are forced to take an unexpectedly funny and action-packed journey into the unknown.

Director Charlie Bean says the main visual influence is Asian cinema — everything from kung fu movies and Godzilla to mech robot battles and Akira Kurosawa classics. “In terms of camera and shot selection, and even in the editorial, there’s a link to what we love so much about Asian cinema,” says Bean. “And at the same time, these LEGO movies have their own tone, and we’re not abandoning that. … You’ll feel that the tone of the LEGO movie brand.”

But having iconic LEGO minifigures perform martial arts is a real problem, especially since the movies treat the mini figure characters as if they are really made of plastic and can’t deviate from how the real toys move.

Early tests that recreated fights from some of Jackie Chan’s classic films served as the first testing ground for putting minifigs through their kung fu paces. “Jackie’s got hips, he’s got shoulders, he’s got elbows and knee and ankles and wrists, which he uses all the time to make his fights feel powerful and punchy and have a real strong kinetic energy,” says animation director Matt Everitt. “That’s something that we don’t have.”

With Chan on board voicing the ninja’s wise master Sensei Wu and starring in the live-action framing sequence, Bean decided to ask him and his team to also choreograph the martial arts for the movie. Telling Chan not to worry about how the moves will be animated, the final fight sequences were performed on camera for reference. “It’s like we prevised with live action,” says Bean. “We had a couple different cameras (shooting it), so we were finding angles to help us figure out the choreography and the shot selection.”

Everitt says that while the animators couldn’t “cheat” the figures’ movements and articulation, they did use a number of techniques traditional to stop-motion. “We’d use other bricks to represent things like knees, or we would dislocate the minifigs—pull the arm off so it’s away from camera and you don’t see they’re separated,” he says. “There’s a lot of work that’s handcrafted in every single frame of the fight sequences.”

Another trick learned from watching Chan’s movies was making sure the fighters felt each other’s blows. “When you watch Police Story or something, you would you know it’s him when the stunt goes wrong or when he actually gets hit,” says Everitt. “So, whenever a minifig would strike another minifig, we wanted it to feel like he really did get punched in the face.”

Sharing the director credit on the movie with Bean is Paul Fisher and Bob Logan, who were part of an intercontinental divide and conquer strategy for making the movie. Bean says he headed to Australia to work with Animal Logic’s main facility, while Fisher and Logan remained in Los Angeles. Both locations had editorial and story teams during production. Some of the animation was done at Animal Logic’s Vancouver facility.

Denmark-based The LEGO Group also was deeply involved in the making of the movie, with Bean saying they advised everything from a design point of view and made sure every brick used in the film is official, down to the serial numbers and logos stamped into each plastic piece. They also created some new pieces and incorporated them into the official lineup so that every piece in The LEGO Ninjago Movie is “legal” LEGO.

In addition to having every character look like a minifig, the movie appears to take place on a miniature scale thanks to visual effects. Bean says he wanted the movie to look like it was unfolding in a typical backyard and shot the LEGOs with real-life elements (like water) and effects—all created in CG, of course—to give the movie the right sense of scale.

The stop-motion feeling was created, as it was in previous LEGO movies, by pulling frames—changing only every second frame, or in some cases every third or fourth. “Any time that minifigs are interacting with a creature or with the real-world effects, they’d be on ones because we have real world water and smoke, ice and fire—we would have to animate the characters animate on ones to make them feel embedded with the effects,” says Everitt.

“We had this range of performance which went from really, really nuanced and understated and delicate and talking about the subtleties of the performance, all the way through to this almost Muppet-style performance,” Everett says.

The movie’s range of styles doesn’t stop with its CG-created stop-motion look; 2D animation powered the flattened expressions of the mini figures’ faces. “I love that aspect about it, that it’s a mash-up of all these different animation styles together, and it feels completely cohesive, like its own thing,” says Bean. “It doesn’t feel disjointed at all.”

The faces’ simplicity also offered a lot of flexibility. Bean says he drew on the principles of iconography in Scott McCloud’s Understanding Comics and a technique he learned from John Kricfalusi working on Ren & Stimpy of taking cliche expressions and pushing them into unique territory.

“You almost have to restrain yourself and try not to over-animate,” says Everitt. “A lot of what we did was take things out of a performance because we often felt like there was just too much in there. A lot of animators, when they first get on LEGO, realize how subtle they can be and how understated they can be. Once it’s up on the big screen, it reads really strongly and really clearly.”

Warner Bros.’ The LEGO Ninjago Movie is in theaters nationwide.