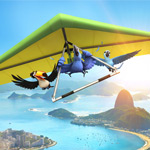 Under the direction of Carlos Saldanha, the team at Blue Sky delivers Rio, a visually stunning valentine to the birds, the beauty and infectious music of Brazil.

True artists are often encouraged to find inspiration in their own backyards and personal histories. That’s certainly the case with Brazilian-born animator and director Carlos Saldanha who decided to put his hometown and its colorful culture and flora and fauna as the central point of the new CG-animated movie, Rio. The talented co-director of Fox/Blue Sky Studio’s Ice Age and Robots and the director of the two Ice Age sequels always knew that he wanted to return to his roots even as he was delivering one blockbuster hit after another with his team.

“I actually started to think about the idea of doing a movie about Brazil and birds back when I was working on Robots,” says Saldanha during a recent phone interview. “I used to own a couple of parakeets and canaries, but they flew away.  I bought a nice camera with a tele-foto lens and really started to get into bird watching, which is something that a lot of people do in Brazil.” 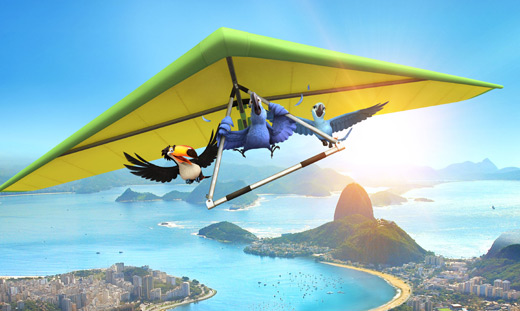 Rio charts the colorful adventures of a domesticated macaw named Blu (voiced by Jesse Eisenberg) who lives with his owner Linda in a small Minnesota town. In search of Blu’s female counterpart Jewel (voiced by Anne Hathaway), the duo take a trip to Brazil, but they find more than they bargained for when a group of bungling animal smugglers kidnap them.

Saldanha says he jumped at the opportunity to have birds as the central characters of his new movie, but some changes had to be made along the way. “My original idea involved penguins, but then they told me that another studio was working on Happy Feet, so we had to scrap that idea and focus on other birds. I cast the movie thinking about the real birds that I loved in Rio, and I didn’t want to stylize them so much that they would be unrecognizable,” says the 43-year-old helmer. “When we see birds in animation, they are often very cartoony. I wanted our birds to perform, fly and move just like birds. I didn’t want their wings to be too stylized to look like hands, but we also needed them to be able to make gestures, so we had to do a lot of research in that area.” 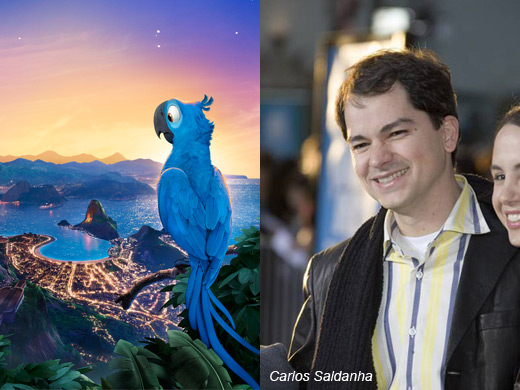 One of the key aspects of the film that sets it apart from Blue Sky’s previous efforts is that it’s set in a world and a place that actually exists. “Although the backdrop of our movie exists as a city, we didn’t want to rebuild the location in animation,” explains Saldanha. “We wanted to create a Rio state of mind, where we creatively convey the place with the culture, the music and the landmarks.”

The director says he wanted the birds of the movie to perform like characters just as the creatures from the Ice Age features had done in the past. “Our previous experiences of animating characters like Scrat helped us a lot,” he notes. “Scrat looked like a creature, but it performed like a character, and I wanted the same thing to happen to the birds. They would be birds first, but then, we would break out of the bird mode and create boundaries for them.”

“In terms of style, we looked at a lot of references for the birds; we went to the zoo and some of the birds were actually brought to the studio here,” says Blue Sky veteran and character designer Jason Sadler, who worked on the two main human characters (Linda and Tulio) and some of the secondary birds of the project. “If you look at how birds have been animated before, it’s been a cartoon convention to make their legs very short, especially in the Disney movies from the mid-40s, The Three Caballeros and Saludos Amigos. But when we looked at the skeletons of parrots, we realized that they have pretty long legs. They’re folded up to the knees, and we don’t see them because their feathers hide them.”

He also points out that it’s almost impossible to cheat when it comes to animating in CG. “Take the seagull in The Little Mermaid, for example,” Sadler explains. “He has gestural wings, but his anatomy changes with each pose and the different camera angles. That’s the thing about CG—the anatomy has to be about 70 percent functional. The proportions have to look correct and the wings have work like bird wings and they have be to be able to support the body. Then you have all the feathers—there are so many of them and each one of them is made up of so many pieces of geometry.”

Sadler says vast advances in CG technology software have made it possible for the animators and technicians to work together to create scenes of breath-taking beauty. “There are some amazing shots of Rio at night time, where you’re looking at the entire city, the moon is reflected in the ocean and light is bouncing off the water,” notes Sadler. “They are rendering more with proprietary software at the studio and the results depict light in a much truer way than before.”

“Technology has got to a point where nothing can get in the way of the director’s vision,” he concludes. “We’ve solved hair, water, fur, feathers, humans—so now that the technology is mature enough to accomplish all those tasks, the emphasis is on storytelling—it’s no longer about how cool the render is, how amazing that cloth looks, it’s all about how touching or imaginative the story is.”

Nothing But Blue Sky

Saldanha believes that the fact that his studio doesn’t quite have a signature style like Disney or Pixar allows them to have a little more freedom. “The other studios have more history and have more rules to follow, but we are a little more loose and are freer to explore where we want to go. We play with everything, different ideas and styles and create our own. We use a real potpourri of animation techniques and we find inspiration in many different styles and eras, from Looney Tunes to classic Golden Age animation. We play with everything!”

Overall, the helmer says he’s proud of the fact that he and his team were able to create, animate and finish the project. “It wasn’t an easy idea to see—selling a movie set in a foreign culture—and then there was the problem of getting birds to emote and to act,” he notes. “But then there were so many great things that the project had going for it. The music of Sérgio Mendes; there’s a sequence where the birds land on a crowded beach on a hang-glider. I think we were successful in showing the scope and epic feel, even people who have never been to Rio can enjoy it.”

In terms of technology, Rio is by far the most challenging movie Blue Sky has tackled to date. The studio’s second stereoscopic 3-D feature, it also features several human characters that play key roles in the storyline. There were several complex crowd scenes, cityscapes and an abundance of characters covered with feathers. The R&D team at the studio created a new feather-renderer dubbed the Ruffle Deformer, which allows the animators to pose and shape the feathers with added control.

Although the team at Blue Sky had worked on human characters in the Ice Age movies, Rio provided them with the opportunity to create full-fledged characters which played a bigger role in the overall picture. Saldanha points out that the studio’s lighting department developed a new way to render skin realistically, even though the human characters had exaggerated, stylized features.

The talented director, who developed a love for drawing and cartoons at an early age, says he was fortunate to be able to marry his affinity for computer graphics with his love of classic toons such as Tom and Jerry, Looney Tunes and Disney 2D features from the golden era. “After I moved to the U.S. in 1991 and got my Masters from the School of Visual Arts in New York, I was able to use my computer knowledge to create art. I always had a gut feeling for animation.

“Today, it’s very exciting to work in a field where everyone is trying to get to the next level and telling great stories with better visuals: It really pushes you creatively. Since 1995, when Pixar introduced Toy Story, we have had so many great animated movies—so many of them are fresh in my head.”

Now that he’s seen the fruits of his labor, the director says he’s thrilled that he has been able to depict his cultural roots and love for his native country through this adventurous feature. “Animation is the only way you can really reach all age groups, and I wanted to share my personal journey and my love for Rio and my heritage with the world. I really wanted to convey all the things that I enjoy, the colors, the music, the people—things that we haven’t seen in animated movies often. I think that is what has given me the most joy.”